Former military officers commenting on military matters have valuable perspectives. On anything outside of that, their opinion is worth no more or less than anyone else's 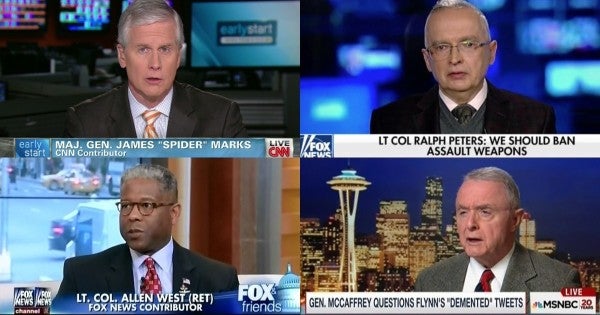 Americans are more politically divided now than at any time in living memory.

It seems that the old adage about opinions and assholes has finally been proven without a doubt. And perhaps the most prominent people with both are America's retired general and flag officers.

Between their appearances in political events and on cable, many people believe that these retired officers are damaging civil-military relations — that by expressing their personal political opinions they might make people think the military is a political institution.

Therein lies the problem. It's not that senior officers speaking for partisans lowers the military's reputation, but that the military's reputation is too high to begin with. The military and its leaders are held in unjustifiably high esteem. The military has come to be perceived as the all-purpose multi-tool of American power, while service in the profession of arms has come to eclipse all other forms of service in perceived merit.

For example, if one thinks of what American institution does humanitarian assistance overseas, most people wouldn't answer USAID, they'd answer the US military. If you asked what job is associated with serving one's country, almost everyone would say the military.

So if you want the best expert on anything national security for your political campaign or to fill out your herd of talking heads for a news channel, why not get a senior military leader?

The military is a machine that does a great job blowing things up. Depending on their roles, various general and flag officers were different cogs in that machine. Big cogs, but cogs nonetheless. If you need information about military tactics, logistics, or even leading large organizations, they're the right people to ask.

But questions on the politics of the Middle East? Not so much.

Some former senior service leaders and combatant commanders had broad-reaching portfolios that went across the political-military spectrum, but the majority of senior officers, just like most of the military in general, have little more insight on the non-military aspects of national security than a well-read average citizen, much less an academic in the field or a diplomat.

But the only academics most people have heard of are those who've written books popular with non-academics, which is not always a sign of great expertise. And as far as diplomats, even fewer people know what a charge d'affaires actually does.

It's not about knowledge, but about the immense and disproportionate esteem the American public invests in the military. They extend that same excessive adulation to retired senior leaders. If the military is full of heroes, then the leaders of those heroes must have some kind of superhuman wisdom. Politicians in particular love to leverage that built-in credibility.

People need to realize how uninsightful the opinions of most retired military personnel are. It doesn't mean they're bad at their former jobs. It just means they're not automatically good at everything just because they were good in the military. Just because you're smart at one thing, doesn't make you a universal problem-solver. Former military officers commenting on military matters have valuable perspectives. On anything outside of that, their opinion is worth no more or less than anyone else's.

You can often see the deference civilians give the opinions of vets in your everyday life. For example, when I talk with distant relatives or run into casual acquaintances, they often ask my opinion on global politics and security affairs, as if I have some special national defense decoder ring. I tell them I have my opinions, but in all reality, my insight is because I'm a well-read citizen, not because I was in the Marines.

Just as a brilliant surgeon would likely be unable to run public housing, generals can lead thousands of soldiers but still be wholly unsuited to much else.

Maybe the military needs to be taken down a peg, or more precisely, maybe we need to accept that the military knows a lot about destroying things, but it isn't good at much else.

Perhaps by these senior officers exposing their ignorance on things non-military, they'll also reveal the military isn't a universal problem solver, but a part of government that's suited to a particular set of tasks, just like any other, from the State Department to the Department of Agriculture.

Retired officers didn't join the Nights Watch from Game of Thrones. They joined the military. Just because generals and admirals were more accomplished than most doesn't mean they have any less right to expose their ill-considered opinions to the light of day than the rest of the veteran community. If we grow accustomed to that, maybe society will become more realistic about its expectations for the military as a whole. The military isn't a holy organization with a calling from on high. It's a group of people who do a very difficult, very essential, but also very specific and peculiar job.

Perhaps that's the first step in people understanding that military genius doesn't lend itself to solving every problem. Power isn't the only type of power, and ultimately, our country should rely on more than just the military to solve international problems.