As a Navy “blackshoe” surface warfare officer, I saw firsthand how our fleet’s leaders have more missions than they have... 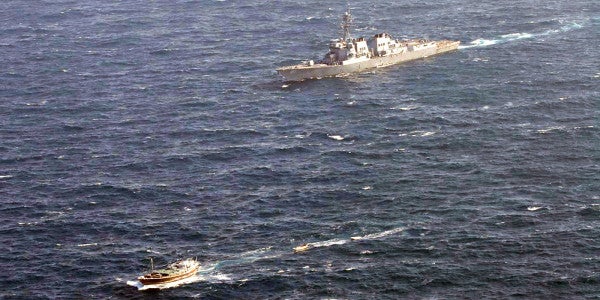 As a Navy “blackshoe” surface warfare officer, I saw firsthand how our fleet’s leaders have more missions than they have ships to fill them. I watched flag staff in a command center wrestle with operational problems that would have been easier if they’d had more hulls, more ships, of just about any kind of surface combatant. The Navy’s go-to workhorse destroyers are too expensive to fill the gap, and its recent small-ship programs have been plagued with problems.

There is one possible solution: Steal a page from the Russian navy’s shipbuilding strategy and focus on raising a fleet of corvettes — the diminutive warships, not the sportscars that newly minted ensigns dream of sticking in their driveways. Alas, the U.S. Navy seems to be going in the opposite direction, turning small-ship plans into big, costly headaches.

To understand the way forward, first you have to dig into how the Navy got into this fix.

Related: The Fitzgerald’s Watch Team Could Have Been Mine »

DDGs cost too many Gs

The backbone of the surface combatant fleet is the Arleigh Burke-class guided missile destroyer — think USS Cole and Fitzgerald. These ships are multi-mission and first-class in air defense, ballistic missile defense, anti-surface, and anti-submarine warfare. They can reach over the beach with Tomahawk land-attack missiles. They can safely operate independently in the world’s most dangerous waters.

They are also very expensive. Two new DDGs slated for purchase in fiscal year 2018 are projected to cost $1.8 billion dollars each. We’re never going to be able to afford to plug all our gaps with Burkes.

That’s not the end of the world. There are many naval missions that don’t require the DDG’s robust capabilities: anti-piracy; exercises with coalition partners; anti-proliferation; drug interdiction; naval presence.

It’s just that, absent enough cheaper alternatives, it’s often a DDG that performs these missions. So we’re treated to the spectacle of a $1.8 billion-dollar warship doing battle with six dudes waving AKs in a $500 skiff off the coast of Somalia. I’ll bet at that very moment, the 7th Fleet commander would have killed for another DDG in his area of operations to do more DDG-suited work: deterring North Korea, tracking Chinese submarines, or staring down Russian reconnaissance and bomber aircraft.

The littoral combat ships, developed to carry out a late 1990s naval strategy of coastal supremacy, were supposed to be the Navy’s small-ship solution. It didn’t turn out that way. The LCS has been plagued with technical problems far beyond those normally associated with the first ships of a new class. Five of the nine delivered LCS ships have experienced major engineering casualties. They are behind schedule and over budget. In 2018, the Navy is purchasing two LCS ships at $568 million each. We are spending one-third the cost of a DDG to buy a ship that’s only one-tenth as capable.

LCS suffered from an excess of ambition. Take the game-changing idea to have the ships built to accept different “mission modules”: quickly interchangeable hardware packages for anti-surface, anti-mine, and anti-submarine missions. Modules could be rapidly swapped out if missions changed, allowing a mine-sweeping LCS to become a sub-hunter. But the Congressional Research Service now reports that the three major modules won’t fully meet operational requirements until 2020 — by which time 24 LCS ships will already have been delivered. On top of that, the Navy has decided to load most LCS ships with a single permanent module. That’s a lot of R&D; and engineering trade-offs for modules that will never be swapped out as planned. Such is the risk with developing new technologies.

So I was excited to hear the Navy recently announced plans for a new frigate, perhaps based on existing LCS hull forms to save money. I hoped we had learned our lesson and were finally going to get serious about cranking out lots of inexpensive hulls to complement the DDGs.

But earlier this month, Vice Adm. Robert Boxall, the Navy's director of surface warfare, sunk my excitement in an interview with Defense News. For starters, the planned prototype was now a guided missile frigate, not a less expensive frigate. Boxall went on:

These phrases didn’t sound like “cheaper basic ships, and more of them.”

To be fair, in the same interview, Boxall talked a lot about costs and Navy’s willingness to keep them down by downscaling the ship’s capabilities. But when pushed on the bottom line, he said that a per-ship cost between $600 million and $1.2 billion would be “in the ballpark there.”

When you factor in the inevitable overruns, the new guided-missile frigate will cost nearly as much as a DDG but not nearly as capable. At that price, why not just build more Burke-class destroyers?

Meanwhile, fleet battle-watch captains around the world are shouting, “My kingdom for corvettes!” A funny name generally reserved since days of sail for ships larger than patrol boats but smaller than frigates.

Take the Russian Steregushchiy-class corvettes. Their range and endurance are similar to that of the LCS: straight-forward and extremely reliable diesel engineering plants; basic self-defense weaponry; a small deck gun; simple sonar; a helicopter deck. It’s armed well enough to take care of itself in the vast majority of waters around the globe, but boasts no real cutting-edge technologies. Most importantly, at an estimated $150 million each, Moscow can buy a lot of these tin cans. The Turkish navy is building similar but larger Ada-class corvettes for $260 million.

The Navy wants to buy 20 of its new FFGs. For the same amount of money, you could buy 160 Russian corvettes or 92 Turkish ones, giving our 80 DDGs the breathing space they need to cover the world’s highest-threat maritime zones. All of the-less demanding missions could be easily delegated to corvettes. Congress should ask our fleet commanders if they’d rather have 20 “DDG-Light” ships or five times as many maneuverable corvettes.

Alas, it seems likely we’re going to end up with yet another small set of experimental, high-tech floating starship wannabes. I guess it’s sort of comforting knowing that, if Somali pirates ever get over-the-horizon supersonic anti-ship missiles to mount on their outboard-powered junk heaps, our fleet will be safe. That is, if there’s an American hull available to be there in the first place.

James Seddonretired from the Navy as a Surface Warfare Officer after 21years in active and reserve billets with multiple deployments afloat and ashore throughout Asia and the Middle East. He currently works in IT at a university and is writing a book about his tour in Afghanistan.