We Need More Vets In Politics. Here’s How To Make Your Mark

Veterans have had a waning presence in American politics for decades, thanks to the draft deferments of the Vietnam era... 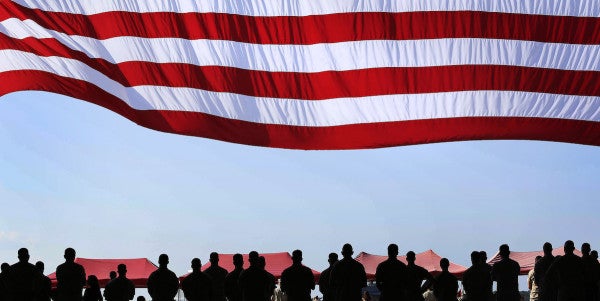 Veterans have had a waning presence in American politics for decades, thanks to the draft deferments of the Vietnam era and the move to an all-volunteer military. Just look at the presidency: After World War II, nine consecutive U.S. presidents were veterans. Of our country’s last four commanders-in-chief, only one, George W. Bush — who served a stint in the Texas Air National Guard — had any military experience. But the palpable dearth of veterans in politics may be about to change in a big way. According to reporting by theNew York Times, roughly three-dozen veterans are gearing up to run first-time campaigns for the House of Representatives in the 2018 election.

America needs a return to the days when the fighting class made up more of the ruling class — more military veteran politicians, as opposed to just veteran politicians. In honor of those who answered the call to military service and are now contemplating a move into the political realm, here are some thoughts on campaigning, leadership, and connecting with the public.

Americans aren’t looking for some distant lecturer doling out advice — we want a representative who understands our hopes, fears, and needs, and one who will legislate accordingly.

Even in a top-down organization like the military, great leaders have always understood the importance of listening. James Mattis, a retired general and the current secretary of defense, is famous for spending frigid nights with his Marines downrange, asking after their families and hobbies and learning about their particular duties. You know you have a good commanding officer when he looks you in the eye and listens to what you have to say.

The same skills help successful business people excel. Many vets now running for office have had lucrative business careers since leaving active-duty military service. If you’re one of those folks, you’ve probably already mastered the classic “empathetic sales” technique: You don’t just tell customers how great your product is. First you ask customers about their problems, then show them how your product will help solve those problems.

So go out there and talk with people, not at them. And since you can’t talk to everyone, be sure to pepper your speeches and ads with references to your own experiences, the people you’ve met, and what they’ve told you. Doing so will help you build a layer of trust with your audience and let voters know you’re there to actually represent them.

Run on your voice, not (just) on your resume.

An upperclass midshipman gives a briefing to first-year midshipmen, or plebes, participating in the annual Sea Trials at the U.S. Naval Academy.U.S. Navy photo

If you’re a veteran running for office, you might be tempted to lean heavily on your credentials. While the allure of this approach is understandable, doing so is no ticket to a guaranteed win. In fact, it might even hurt your chances.

For decades, campaign consultants have been turning candidates into resume-bots: cybernetic organisms able to blandly articulate talking points; beings heavy on qualifications but light on humanity. While this was an effective — albeit uninspiring — strategy for a while, the internet has played spoiler, upending established communication norms just as the printing press and television and radio did in the past. The brightest candidates of today are able to use this new landscape to their advantage.

In picturing your ideal campaign persona, it may help to harken back to your early years. As a kid, you probably had friends with “perfect” parents, cookie-cutter folks who were always well-dressed and on their best behavior. You also probably knew parents who did weird, random things that embarrassed your friends. Who was more fun? Or, perhaps more importantly, who were you more comfortable around? Just a guess, but it was probably the weird ones, who danced awkwardly to classic rock and cracked up at their own terrible dad-jokes, right? Those parents felt more genuine, more relatable, and maybe even more trustworthy, mostly because they were real people who weren’t afraid to be who they are.

Tell your story of service in a meaningful way.

When it comes to effective storytelling, there are few better guides than Joseph Campbell’s “hero cycle,” a remarkably consistent narrative pattern in great religious and epic myths of societies across the world — George Lucas even structured the Star Wars movies after Campbell’s cycle. While there are a number of ways to break down the hero cycle, it essentially boils down to three broad stages:

If this sounds a lot like a young fighter who went off to war, sacrificed and learned hard lessons, and then returned as an experienced veteran ready to run for office and share his or her newfound wisdom with American voters, it is. Or, it could be, if you learn to use your service to effectively connect with your audience.

As you contemplate your own political quest, keep in mind that even the most organized campaigns will falter if they are not founded on a sound and appealing message. America’s political terrain has shifted, and favored candidates gliding on experience, once thought to be shoo-ins for the offices of their choice, are no longer guaranteed winners. Voters, more than ever, are looking to connect with our representatives, and veterans have a unique ability to capture this sentiment. That is, if you use the right approach.

Joe Flood is a reporter and author of the book The Fires. Renny and Joe co-founded N2 Communications, a small company of writers, editors, and podcast producers who help companies tell their stories.

Eli Schmerler is a former Army sergeant and Afghanistan veteran. He is currently a student at Harvard and a researcher for N2.