The ‘micromanaging’ Marine general should focus on strategy, not mustaches

"Your primary focus ought to be the art and strategy of war, not policing mustache hairs." 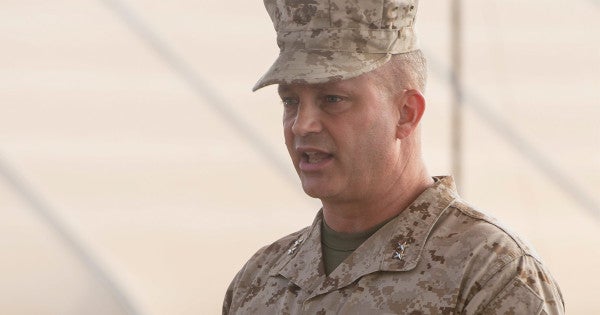 Editor's note: This article was written on the condition of anonymity by an active-duty junior Marine Corps officer in the combat arms. His identity is known to Task & Purpose but is being withheld at his request out of concern for retaliation that may harm his career. It comes in response to a policy letter issued on April 16 by Marine Gen. David Furness, commanding general of 2nd Marine Division, which established a basic daily routine due to what Furness described as “a significant decline in the basic discipline” of his Marines.

Though I am a mere junior officer, let me be entirely frank: your latest policy letter 5-19 “Basic Daily Routine” violates the core tenets of Marine Corps doctrine. You ought to repeal it immediately.

The Marine Corps has long preached adherence to the idea of “maneuver warfare,” “decentralized command,” and the “strategic corporal.” The core text of our service, Marine Corps Doctrinal Publication-1 Warfighting, states explicitly: “The senior intervenes in a subordinate's execution only by exception. It is this freedom for initiative that permits the high tempo of operations that we desire. Uninhibited by excessive restrictions from above, subordinates can adapt their actions to the changing situation.”

And yet, excessive restrictions and overbearing command were exactly your responses to problems with military appearance in the 2nd Marine Division. Your Basic Daily Routine spells out, hour by hour, exactly when Marines are to come to work, when to leave, and even when to eat chow.

This is micromanagement. It's also a sign of disconnect from reality. Don't get me wrong, the question of proper shaves, trash on the ground, and poorly maintained facilities is noteworthy. Cleanliness and orderliness are hallmarks of well-functioning communities military and civilian alike.

But these things are not essential. You can kill enemies with long hair. You can win battles without boot bands or rolled sleeves. At the end of the day, grooming standards have only tangential relevance to victory in war.

If appearance equated to battlefield success, then you ought to compel your Marines to charge into combat in their dress blues!

Looking good is not the same as being good. Success on the parade deck does not equate to success on the battlefield. Perception is NOT reality. America perceived Mujahideen tribesmen in the Hindu Kush as backwards goat herders we could easily defeat. And yet today the Taliban still controls Afghanistan despite 17 years of effort, trillions of dollars, and thousands of American lives.

Is America's ongoing defeat really a result of Marines not shaving enough or failing to keep their barracks rooms' blinds at half-mast?

If, as you argue, “ironclad discipline” and “regimented” daily life win wars, then why couldn't we beat the Taliban? Why is it that we outspent our enemies 100,000 to 1 but still couldn't attain victory?

One reason might be the fervency of the jihadist cause. Our enemies might not blouse their boots or know how to “left-right-leyo” but they sure know how to make IEDs and fight for decades on end. They're willing to die, even by suicide, to see our removal from their land.

Marines explicitly rejecting common standards is a problem. But it should be put in proper perspective.

If I went to your division right now, what percentage of your Marines would know, from memory, how to properly fire, clean, disassemble, and re-assemble a crew-served automatic weapon? How many combat arms Marines could do so? What percentage of vehicles in your division actually work? How many of your lieutenants have done any serious professional reading in their spare time? How many of your lieutenant colonels?

I know, from my own observation, that the answers to all of these questions would reveal serious deficiencies. I can't train my Marines on crew-served weapons because we don't have the allocation for ammunition. We can't fix our vehicles because we're short parts for months at a time. We officers don't read in our spare time because thinking critically about war doesn't get us promoted.

Mindlessly towing the company line and racking up meaningless billet accomplishments does.

The problems I observe in the Marine Corps today are more profound than low fade haircuts and holes in uniforms: They are problems that run all the way to the core of the organization's being. They certainly will not be solved by generals micromanaging from the mountaintop.

Many Marines have no higher aim than collecting their GI Bill or pension. And those Marines who do have great spirit, who yearn to defend their country, are systematically crushed. The Corps drowns them in PowerPoint presentations, annual training, and administrative requirements.

No Marine joined to pull weeds around the battalion command post. And why would they? What does weed pulling have to do with war?

But even if it did, micromanagement and mass punishment is not the way to make a unit better at either grounds keeping or combat.

If the 2nd Marine Division staff noncommissioned officers and officers are really of such low quality that the commanding general has to mandate a daily schedule then the division ought to be abolished. It's a sign of utter incompetence on the part of every commander under your charge. If Marine leaders who are supposed to lead troops in combat actually need that kind of babysitting by a two-star general then the American taxpayer would be better off without them.

But I doubt your subordinates are the problem. In my view, the bigger problem is myopic and petty senior leaders more concerned with budgets and programs than inspiring Marines with belief in a common cause.

In fact, there is a real question as to whether the unifying principles of the Corps today can even inspire at all.

The American military claims to defend the country, but I ask you: how has spending trillions of dollars to bring democracy to the Middle East made America any safer? How does stationing troops in Okinawa to protect foreign countries and trade routes rouse young Marines to heroic sacrifice? Moreover, how are we even supposed to win battles in the “great power conflict” the entire D.C. foreign policy circuit keeps prattling on about?

How are conventional forces supposed to strike a decisive blow against a nuclear-armed state without being utterly obliterated? And if America can't even defeat the Taliban why do we expect to defeat an insurgency with the backing of the People's Liberation Army?

These are the questions you, a general, ought to concern yourself with. Your primary focus ought to be the art and strategy of war, not policing mustache hairs.

Answer the bigger questions and everything else will fall into place.

Fail to do so and you can sign as many policy letters as you want. They won't solve a damn thing.

The claim by Maj. Gen. David Furness was regarded by a number of Marines reached by Task & Purpose as insensitive, since it suggested that a Marine killed by enemy action could somehow be to blame for their own death. The general made the remark while connecting things Marines do in combat with things they do in garrison as a way of explaining his decision to release a letter outlining steps to correct disciplinary and leadership problems in his unit.

But it didn't seem to come out very well.

“In Iraq and Afghanistan, I was presented right up front with the fact that the more disciplined a unit is going into a fight, the less it bleeds, period,” Furness said on All Marine Radio, which is hosted by a Marine he previously served with. “I've seen it played out time and time and time again.”

Furness served as the commander of Regimental Combat Team-1 in Afghanistan during a year long deployment beginning in Sep. 2010. There were 21 Marines assigned to RCT-1 that were killed in action during his time there, according to the Defense Casualty Analysis System.

“These basic breaches of attention to detail are a direct result of not habituating yourself to the small details that you learn how to do in garrison activity,” Furness said. “It's not chickenshit. This is all about combat performance.”

“It's everybody's responsibility,” Furness added, before mentioning a specific incident from the deployment in gruesome detail: “Like I said the whole thing about not wearing a seatbelt and the driver killing himself because he hit an IED and he went 200 G's into the steering wheel and separated his aorta from his heart, and he bled to death. Well, why didn't his tell him to put his seat belt on?”

“That kid could be alive today if that one act was done. Why wasn't it done?”

Task & Purpose reached out to 2nd Marine Division to ask for more specifics or other information that may have helped to put the quote in context.

“As a commander, I have always regarded the responsibility of training my Marines with the utmost gravity, because that's what they are owed in preparation for combat — our best efforts to prepare for the most challenging environment known man. I have nothing but respect and admiration for the Marines that have served under my command, and even more so for those young men who gave their lives in the service of our country.”