The Pentagon’s fight against suicide could be making things worse

"As much as the U.S. military and veteran community says they are destigmatizing mental health treatment, it's still regarded as personal weakness and not as a health problem — and to some extent, the military's own policies promote that outlook." 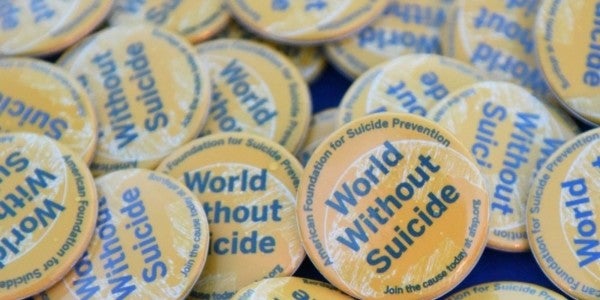 I've been thinking a lot about suicide lately. No, that's not a suicidal ideation, it's just what I've been thinking about. One of my good friends, the last person I ever thought would fall victim to the scourge of suicide, killed himself. The one guy I knew, who would have stayed up for days to talk someone else out of suicide, ended up doing it himself.

I can't figure it out. Any one of the dozens of people he had helped over the years would have come to his aid if only he had asked. But he didn't.

I thought about writing a column about how badly that bummed me out, but that's been done a dozen times. Suicide is awful. If you think you're doing your friends and family a favor by killing yourself, you're not. It really sucks for them. Discussing that isn't exactly breaking new ground.

I thought about writing about how you need to seek help if you're depressed. That's true, especially if you've thought about killing yourself. Call 800-273-TALK. That's not a revelation. Every service member probably has a half-dozen refrigerator magnets from safety stand downs with mental health hotline numbers on them.

I thought about doing 22 pushups and posting the video on Facebook to help prevent veteran suicide. No, I didn't. That's complete bullshit.

That said, military leadership (I almost said “the best minds in the military”) has been racking its collective mind trying to figure out a solution to the problem of suicide among both veterans and active duty service members and getting nowhere.

To be sure, those groups have very different problems. Contrary to popular conception, the veterans most prone to commit suicide aren't recently discharged vets with PTSD and the like, but men in their 50s. They aren't succumbing to the demons of combat so much as the stereotypical disappointments of middle age: the military told them they were conquering heroes, but in the end, they saw their productive years pass them by and saw the same problems as everyone else — relationship problems, career stagnation, and ungrateful kids.

In contrast, or perhaps in similarity, active duty troops kill themselves because they have transient problems and they don't feel as if they can get help. The irony is that the military has help coming out of every orifice. They have their whole chain of command telling them to get help. They have mental health resources from their unit to Military One Source to a dozen hotlines.

Still, no matter what the military gives as help, they don't seek it out.

As much as the military and veteran community says they are destigmatizing mental health treatment, it's still regarded as personal weakness and not as a health problem — and to some extent, the military's own policies promote that outlook.

The second a service member is suspected of suicidal tendencies, his or her weapon is taken away. They're taken out of their normal duties and checked on incessantly. In any case, making such an ideation is grounds to be the subject of a “flash report,” submitted immediately, and transmitted all the way up the chain of command. Especially for officers and NCOs, admitting weakness is to have one's situation immediately broadcast to the world.

To give one example from my experience in the Marine Corps, Aviation Safety Councils started in the Air Wing as a way of paying special attention to aircrew. The idea was that a committee of senior leaders would review any personal problems of pilots and aircrew, because any distraction might cost seconds in the air and thus lives.

If there was a significant issue, the Marine was grounded.

The concept soon expanded to cover the ground Marines in the unit and now many units on the ground side do something similar. But while it may be a reasonable thing to do, it puts a huge spotlight on that Marine as being somehow defective. It's further amplified by the fact that taking antidepressants generally makes aircrew “med down” — something that all of that Marine's peers will soon hear about.

The unintended consequence of this was to teach individuals to never admit their problems to officers and senior NCOs.

Just when a person most needs to be with his or her brothers and sisters, admitting to a suicidal ideation is to be immediately isolated from one's support network. The one thing that the person is likely proud of — serving alongside his brothers and sisters — is taken away.

That's not to say that suicidal ideations shouldn't be taken seriously. It is saying that perhaps we shouldn't go overboard.

Perhaps it can be taken in stride when possible. Perhaps the more the military elevates suicide to a crisis, the worse it gets.

Perhaps the answer is to normalize it, or more precisely, to normalize mental health care. If someone breaks his ankle, we don't freak out. We give him a cast and put him to work doing whatever he can do.

If someone has a mental health crisis, whether a panic attack or a suicidal ideation, perhaps we don't think of it as an emergency, but as an illness. We prescribe the right medication for it and move on.

During my training as a Marine officer in TBS, we were presented with a leadership scenario placing us in the shoes of a squad leader in World War I securing a position in an isolated stone farmhouse being bracketed by German artillery. Should the squad shelter on the near side, the far side, or inside the building? My fellow lieutenants and I came up with elaborate solutions involving fortifications, or listening for the shells and going to the right side of the building, or some other tacticool nonsense.

The real answer was that an officer's job is often to just make a decision and remain calm. The more we add CCIRs (Commander's Critical Information Requests), flash reports, and generally elevate minor distress into emergencies, the worse the problem becomes.

We need to normalize mental health treatment. We need to make it so that people aren't singled out as “weak” for seeking help. That isn't weakening the force or lowering standards.

It's just acknowledging modern science, admitting that just as a service member saying that his or her knee hurts might need an MRI and a course of rehabilitation, a service member who admits depression might just need some counseling and a prescription. Once a knee is healed, a trooper is ready to serve.

The same thing is true for a brain.