Real Patriotic Veterans Don’t Need To Be Obnoxious About It

For many veterans, patriotism is a force that gives their service its meaning. Most of us hold that love of... 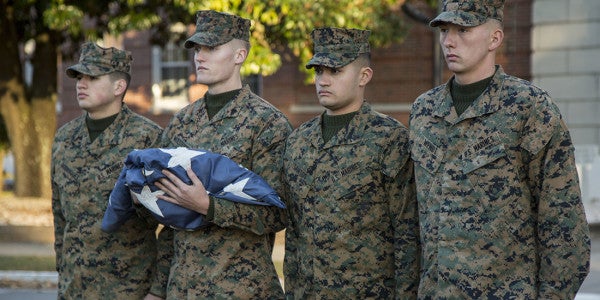 For many veterans, patriotism is a force that gives their service its meaning. Most of us hold that love of country deep in our hearts. And some of us like to pull it out and put it on full display like a regiment of red, white, and blue peacocks.

I’m not against displays of patriotism. But there’s proudly hoisting a U.S. flag on your porch or lapel… and then there’s reverse-engineering some TV coverage for your more-American-than-you driveway patriotism.

There’s the naval officer who feels the need to play Taps every evening on large loudspeakers, to the annoyance of his neighbors. And the guy who painted his mailbox red, white, and blue, contrary to his homeowners’ association rules. And the Navy vet who insisted on flying a service flag in his condominium complex in violation of its rules. Most recently, in Texas, a Marine veteran erected 20-foot flagpoles on either side of his driveway with U.S. and Marine Corps flags, flouting the property codes.

If only these people had been members of organizations where good order and obedience to rules were more important than individuals’ feelings!

They make those flamboyant displays and usually explain them as honoring fallen brothers. Then they pledge to fight, like the Texas Marine: “If they're going to take them down, it's going to be a fight to take them down, and no one fights harder than a veteran combat Marine.” He added: “If they don't get those rules changed, I'm going to start a petition to get the rules changed.”

Slow your roll. It’s not the municipal government’s or HOA’s job to “get those rules changed.” It’s his job to obey them until he gets them changed or obtains a waiver. In his particular case, the problem wasn’t even the flags themselves, it was the illegal placement of the poles. He could have moved one, or flown both flags on one pole, and rendered the same honors while still following the rules. Was he fighting for the flag or for attention?

Most displays of the national colors are protected by The Freedom to Display the American Flag Act of 2005. If all you want to do is display the flag, you almost certainly have the right to do so. If someone is bugging you about your flag, that’s probably because its placement isn’t in keeping with the local building codes, not because some condo commandant hates God and country.

And if you’re playing Taps daily at full volume in a residential neighborhood? Dude. Seriously? “When my husband was buried, they were folding the flag to give to me, and Taps was playing,” one neighbor of the trumpeting naval officer told Task & Purpose. “It’s a constant reminder, every day. There’s nowhere I can go in my home without hearing it.” The vet claims he’s tooting his horn to honor people like her husband… by making her miserable.

In other words, you have to really make an effort to break the rules. You have to piss people off. You have to get people pissed off at your flag, which, as the widow above makes clear, is not as easy as some insecurely patriotic flag-wavers think.

If these vets had put as much effort into research before erecting these displays as they did into making spectacles of themselves afterwards, they could provide honors to the fallen without breaking rules. But if you can’t make a big scene, there’s no point, is there?

A lot of people just ascribe all these cases to busybody homeowners’ associations. HOAs are often annoying, but everyone complaining chose to live in a neighborhood with one. This isn’t really about the neighborhood; it’s about needing to be seen as being more patriotic than than one’s neighbors. Most of the cases dredged up by the media are there because the vet actively sought public sympathy and reinforcement. Applying for code variances, attending association meetings, and politely requesting rules clarifications from property managers aren’t glorious or exciting like getting vaulted to patriotic celebrity on the local news is. But go ahead, be an individual. Just like the service taught you, right?

Many people today seem to believe that shouting something the loudest means you believe in it more than everyone who’s forced to listen. But being louder often means your beliefs are less sincere, not more. It doesn’t take a devoted Christian to see the truth in Jesus’ words from Matthew 6:1: ”Be careful not to practice your righteousness in front of others to be seen by them. If you do, you will have no reward from your Father in heaven.” His point was that being seen as pious by spectators was its own reward and rated nothing more than that. Being faithful when no one but God was watching was the true test of faith.

Similarly, being patriotic when no one is looking is more difficult than shouting “‘Murka!” at the top of your lungs.

Playing Taps at earsplitting volume and ostentatiously waving flags about aren’t the most genuine displays of patriotism; your service and your quiet professionalism are. Being a quiet professional about anything isn’t very trendy nowadays. Being loud and visible doesn’t increase your righteousness, just your social media profile. Patriotism is about what’s in your heart, not about what’s in your yard.