Remember Ilovaisk: The Pitched Battle That Captures The Lunacy Of The Trump-Putin Summit 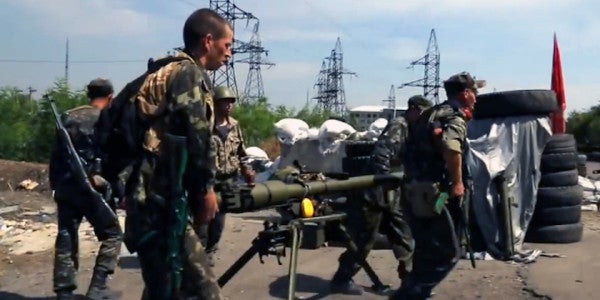 President Donald Trump’s press conference with Russian President Vladimir Putin in Helsinki was an unequivocal embarrassment for the United States. Most galling was President Trump’s assertion of moral equivalency between the conduct of the mafia-state Putin has cultivated over decades and America’s past foreign policy mistakes. When pressed on why U.S.-Russia relations had deteriorated despite attempts at prior diplomatic resets, Trump responded “I hold both countries responsible. I think the U.S. has been foolish. We’ve all been foolish.”

Observers are correct to point out Russia’s sins from the last few years alone: Annexing Crimea, downing MH17 over Ukraine, the DNC hack, poisoning dissidents, murdering journalists, jailing Russian opposition leaders, and providing military support for the murderous regime of Bashar Al-Assad in Syria’s civil war among them. But one event less mentioned, however, encapsulates the utter lunacy of Trump’s assertion: the Battle of Ilovaisk in August 2014.

Russian “Little green men” and lorries after the seizure of Perevalne military base on March 9, 2014Wikimedia Commons/Anton Holoborodko

The Russian-provided Buk anti-aircraft system that killed 298 people on board Malaysia Airlines MH17 on July 17, 2014, was part of a larger Russian effort to negate the close air support advantage enjoyed by Ukrainian forces in their “Anti-Terrorist Operation,” an offensive designed to retake Eastern Ukraine from separatists backed by Russian “Little Green Men.” The clandestine effort, which involved Russian air defense personnel, was wildly successful: Without air support, exhausted Ukrainian army and police units became bogged down outside the Separatist strongholds of Luhansk and Donetsk.

The city of Ilovaisk was key area held by Ukrainian forces, a critical rail junction between the two separatist enclaves. And as the international community began pushing for peace talks between Ukrainian and separatist authorities, Russian forces invaded Ukraine on August 24th, 2014. “It was completely unexpected,” Lieutenant General Ruslan Khomchak, who commanded Ukrainian forces at Ilovaisk, told Newsweek. “The Russian forces simply marched in.”

By itself, Russia’s invasion of Ukraine makes Trump’s assertions in Helsinki outrageous, but Russian forces' conduct on the battlefield makes them appalling.

According to Newsweek’s reporting, Russian soldiers captured by the Ukrainians were lightly equipped and had been told by their superiors they would be on routine maneuvers within Russia’s borders. Still, as Russian forces encircled Ilovaisk the same night, Putin claimed to the world that his soldiers were “lost.”

After contacting Russian commanders, the Ukrainians began withdrawing days later from Ilovaisk along negotiated routes. Putin himself even publicly plead for a “humanitarian corridor” for the desperate Ukrainian soldiers. It was a trap. As the Ukrainian columns set out, they were ambushed and destroyed. Ukrainian President Poroshenko was forced to accept a cease-fire on Russian terms.

So much of the United States’ Cold War knowledge of Russia was lost after the fall of the Iron Curtain that, in some ways, American political leaders simply forgot who they were dealing with. Phrases such as “Hybrid War” and “The Gerasimov Doctrine” were trending in the U.S. national security community in 2014. More often than not, these were just different ways of describing Russia doing what it has always done: Manipulate events through lying, gaslighting, and cold-blooded calculation.

Ilovaisk was no different. Putin tossed thousands of unwitting conscripts into what was described as “a meat grinder.” By ordering the removal of their insignia, regular Russian soldiers could be plausibly denied as Ukrainian separatists. Echoing methods used by the KGB’s predecessor, the NKVD, in the Spanish Civil War, Russian troops were accompanied into Ukraine by mobile crematoriums to dispose of the dead. When caskets did go home, families were not permitted to open them. All the while, Putin’s machinations meant his feigned role as peacemaker covered for the ruthless consolidation of battlefield gains.

President Trump’s lack of affinity for professional development of any kind is well known. To be sure, the United States has made its fair share of mistakes, such as the downing of an Iranian airliner in 1988, trading arms for hostages in Lebanon in 1985, or supporting South Africa’s apartheid regime. But there is no equivalent to Russia’s malicious conduct in 2014, especially at Ilovaisk. To suggest otherwise reflects a disturbing outlook the part of the president not just on the nature of the United States, but on the global order generally —and its potential to work in the United States’ favor.