Sean Spicer Is Hiding Behind A Fallen SEAL

White House Spokesman Sean Spicer introduced a curious new logic into the analysis of American military action in his most... 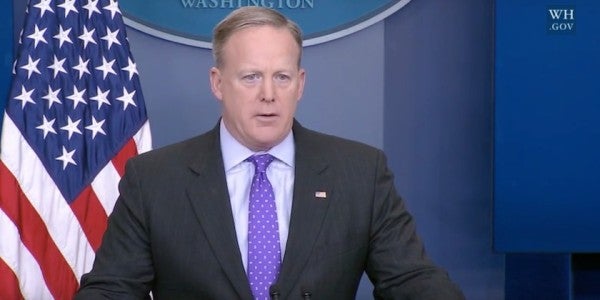 White House Spokesman Sean Spicer introduced a curious new logic into the analysis of American military action in his most recent press conference. If a service member is killed in action, Spicer appears to believe it ceases to be legitimate for anyone to question the value or success of that action.

Speaking Wednesday to the White House press corps, Spicer said that the recent raid in Yemen was “absolutely a success. I think anyone who would suggest it's not a success does disservice to the life of Chief Ryan Owens.”

In other words, because Owens died on the mission, his death trumps, as it were, reasoned analysis.

Spicer on Yemen raid: Anyone who undermines success of the mission does a “disservice” to Navy SEAL who died https://t.co/1zwGh6vYDE

As it happens, I am not and do not claim to be equipped to judge the success or failure of the mission in question. I have never had and likely never will have access to the mission records, and will never see whatever intelligence was gathered.

But all of that is entirely irrelevant.

By Spicer’s logic, we no longer have the right even to discuss whether or not a mission or a battle or a war is successful if anyone dies executing it. The dead service member is an argument stopper, that blocks all commentary or criticism. Once someone dies, any declaration of success is unassailable because to question such a declaration is to dishonor the sacrifice of the deceased.

This is, of course, in conflict with how the military itself goes about its business when things are working right, something Spicer, a commander in the Navy Reserve, surely knows. After any contact with the enemy (as well as many other, more mundane activities), the personnel involved conduct after action reviews. These wide-ranging discussions above all require honesty and self-criticism, and a willingness to speak truthfully about how successfully or unsuccessfully a mission achieved its goals. I have attended a couple after-action reviews (for an airshow, of all things), and it was remarkable to see how self-critical people were after an event that to my civilian eye was a gigantic success.

Spicer’s outrageous logic would invert this. From one perspective, any death on a mission is by definition a failure. I know many fine leaders of all ranks, and every single one of them considers the loss of even a single member of the team as a devastating failure that tarnishes even an otherwise glowing success.

Indeed, the perversity of Spicer’s logic is damning. If we are to honor the loss of life that is the tragic but frequent result of military action, we are obliged to be most self-critical when service members die. They serve knowing that they are assuming risks that most of us will never assume — that I have never assumed. We do not dishonor the dead by asking for honest evaluation of a mission, but by pretending — insisting —that the death of a service member must protect political leaders from the consequences of the decisions that put the dead in harm’s way.

Spicer went on to suggest that anyone who “undermines the success” of the raid “owes … an apology” to Owens. Nonsense. Spicer is the only one who owes an apology, for attempting to shield his boss from criticism by hiding behind the death of an American service member. Those who take the risks this SEAL took, and pay the price he paid, deserve much better from our political leaders.