What it was like checking into a new unit the day before the world changed. 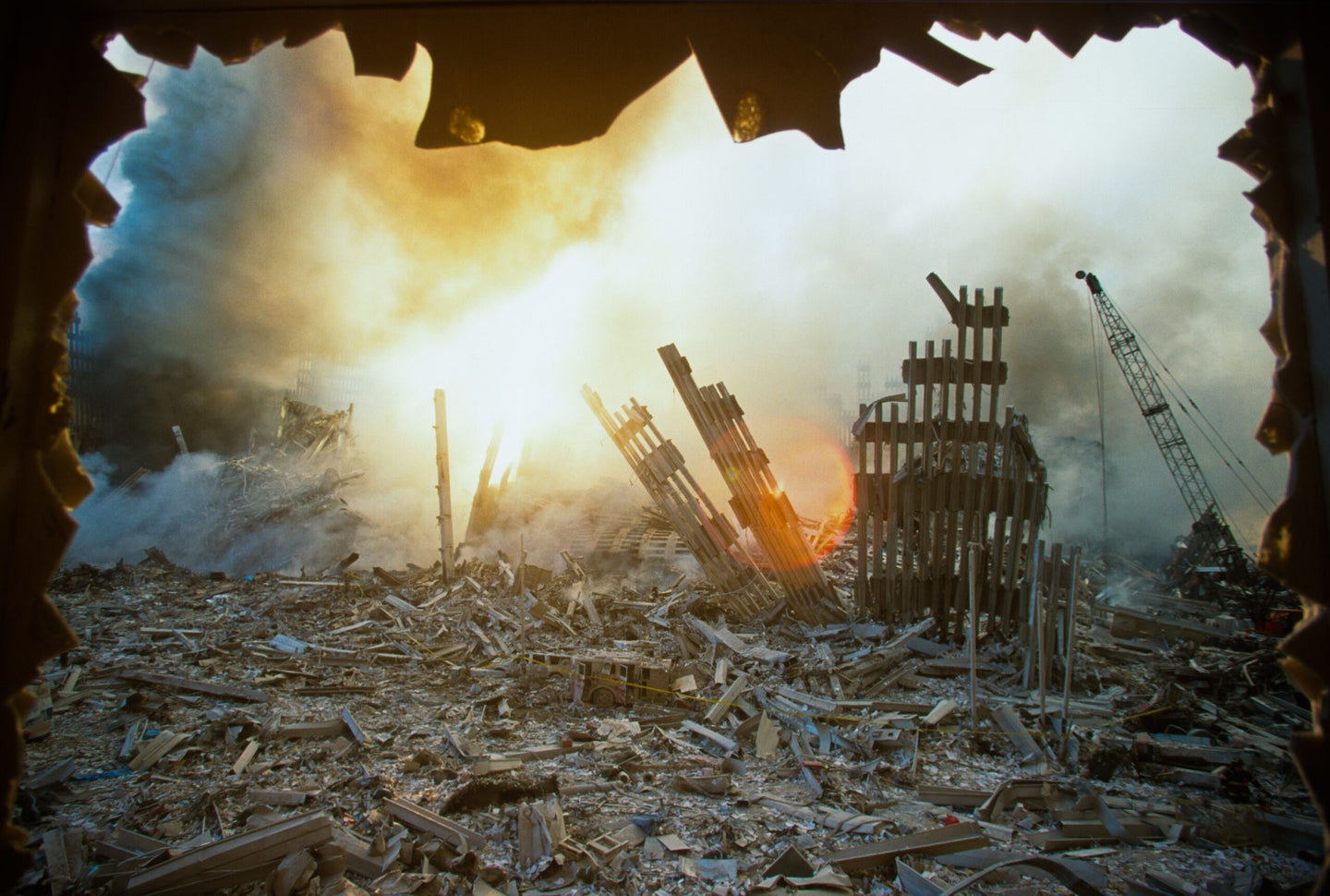 The rubble of the World Trade Center smoulders following a terrorist attack September 11, 2001 in New York. A hijacked plane crashed into and destroyed the landmark structure. (Photo by Porter Gifford/Corbis via Getty Images).
SHARE

On Sept. 10th, 2001, I officially reported into the Air Force Doctrine Center at Maxwell Air Force Base in Montgomery, Alabama, after returning from an overseas assignment. I signed in from leave and met some of the people I’d be working with, received the standard Air Force in-processing checklist, scheduled a few appointments for the next day, and was told to go home and take care of family business — which I was relieved to hear since my wife, Barbara, and I were trying to settle in the local area, including moving into our permanent quarters.

The next day on Sept. 11, which dawned bright, blue and unseasonably crisp, Barbara and I got our three elementary-age children ready for school and I took all three to school in our only car at the time before heading to my first in-processing appointment at work. Just after dropping off the kids, while listening to the National Public Radio Morning Edition news broadcast in the car, I heard that a light plane had collided into one of the towers at the World Trade Center in New York City, and the area of the crash on the tower appeared to be burning. Since I had some time before my appointment and because the portrayal of the radio report just didn’t seem plausible to me, I decided to stop by our temporary rented efficiency apartment and turn on the TV to CNN. When I came in through the front door, I saw that Barbara was watching the event live, so I sat down and we watched the 9/11 events that day unfold together.

Just at the moment I was telling Barbara that by the size of the damage and fire, it didn’t appear to me that a small plane hit the tower, we were surprised to see a second plane smash into the other tower. I told Barbara that it wasn’t a small plane and that it appeared to be a commercial jet airliner. Just like the rest of the world, we were in shock. I told Barbara that this wasn’t an accident and that I believed it was a terrorist attack. She then looked at me in bewilderment, and said, “Who would do this?” I didn’t answer immediately but thought for about a minute before I said under my breath, “His name is Osama Bin Laden.” She said, “Who is that?” I said he was a known terrorist that I thought had attacked the World Trade Center before and was the head of a terrorist group that was behind other terrorist attacks against U.S. facilities around the world.

Since it was approaching the time of my first appointment, I called my new boss and asked him if he had heard the news. He said the folks at work were watching TV as well and told me not to go to work that day. I said I thought I should come in because maybe I could help in some way. He said not to bother because Security Forces had closed off the base, backing up the cars filled with students attending the various courses taught by the colleges of Air University who were trying to get onto the base for their first classes of the morning. He said I’d never get in that day. So, as Barb and I watched the chaotic events unfold — the attack on the Pentagon, the confusion of reports of other planes possibly being hijacked, the look on President George W. Bush’s face when he was told what was happening in the middle of a public event in an elementary classroom in Florida, the collapse of both towers, the crash of another jet in Pennsylvania, and the grounding of all air traffic — I knew that the United States would probably at least retaliate similarly to what we did after the other Al Qaeda attacks during the last few years of the Clinton Administration.

Like many U.S. bases, it took a few months for things to get back to a normal routine at Maxwell. In those months, we were put on a higher force protection alert status and we actually exercised our security processes and procedures. We got used to the heavily-armed Security Forces vehicles positioned just inside the gates with their guns pointed at the incoming vehicles. For weeks, we waited for hours while in line trying to get onto the base while the Security Forces searched underneath our vehicles or used bomb-sniffing dogs to search for explosives. What was extraordinary at the time was the unity and support we felt in our local communities, indeed, all over the country. Churches were packed for weeks and even months. In the first week after 9/11, almost every local Montgomery church had prayer services every night. Barbara and I attended some of these, and it was obvious that many in our community were as confused by the attacks as those of us in the military who were uncertain of the days to come. Pastors and priests were trying to help their congregants make sense of the senseless death and destruction, as well as asking for God’s provision to protect our service members during what everyone knew would eventually come, a military reckoning on those who perpetrated the attacks and those who provided sanctuary to them.

I didn’t know then that once we completed the military operation to eject both the Taliban and Al Qaeda out of Afghanistan, we’d end up occupying it, and assist with setting up a new government while simultaneously waging a counterinsurgency campaign that would cost billions in U.S. treasure, tax the All-Volunteer Military Force and its exquisite equipment, and take the lives of thousands of military and civilian men and women for the next 20 years. No one could have foreseen this on 9/11, and I’ll leave the finger-pointing as to why events devolved over the past year to the politicians, pundits and armchair quarterbacks.

Reflecting on 9/11 and the evolution of events over the past 20 years, I know many Americans, as am I, are concerned whether the Taliban will continue to allow a peaceful evacuation of not only U.S. citizens but also our allies and partners. Just like on 9/11, I have no idea how events will eventually turn out in Afghanistan. However, I’m hopeful that after 20 years of U.S. influence and investment in the people of Afghanistan, that progress can’t be completely stopped.

What I want American service members and civilians who served there and lost comrades or were wounded or saw their friends injured is that your service and sacrifices were not in vain. The cause was just and you served a noble purpose. It was just to eject Al Qaeda and the Taliban from Afghanistan and defend against an enemy that tortures and kills people who don’t hold their beliefs, not just in our country but also in Afghanistan, and on innocents around the world. It was a noble attempt to assist an oppressed people to establish a government that governs better, represents the will of the majority, protects its people against a savage ideology, provides equal justice for all, and provides services and opportunities for all of its peoples to prosper with dignity and in peace. As much as we tried, we can’t control the events, society, and the people of a country that has resisted change for a thousand years. Nor can we effectively influence the political, sectarian, and cultural forces on the border just outside Afghanistan that provide the resources to keep its people fighting among themselves and suffering.

However things turn out in Afghanistan, you served a higher cause with honor, and for that our country owes you our deepest gratitude and respect. If you grievously suffered there, either physically or emotionally, our government should make a solemn promise to you that you never have to worry about your medical care or supporting your families who supported you through the worst of your trials and pain. God bless you and the United States of America as we come to grips with an ambiguous end to an era in Afghanistan. Like 9/11, with the help of our faith, families, communities, a grateful and resilient nation, and most of all time, we will adjust and, hopefully, come out wiser and stronger.

Hugh Curry currently serves as a federal civil servant in the Office of the Undersecretary of Defense for Intelligence and Security. A former enlisted member of the U.S. Army Infantry, he retired from the U.S. Air Force in 2005 as a career intelligence officer. He is a veteran of Operation DESERT SHIELD/STORM and Operation SOUTHERN WATCH. He has served the Department of Defense either on active duty, as a reservist, a consultant or a federal civil servant since 1978.

The opinions expressed in this document are those of the author. They do not reflect the official position of the U.S. Government, Department of Defense, or the Office of the Undersecretary of Defense for Intelligence and Security.