"I would go on to serve two deployments to Iraq as a soldier and one deployment to Afghanistan as a civilian advisor, and each time, I would feel the physical manifestation of the grief I felt after losing my brother" 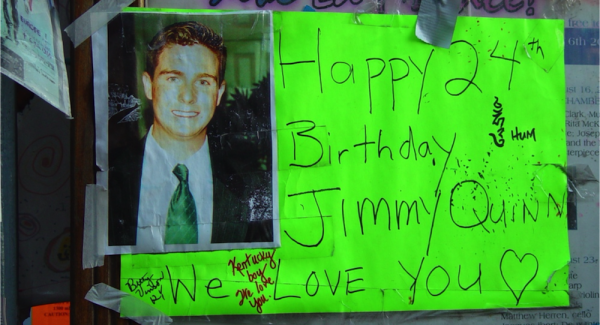 Editor’s note: This article first appeared in 2015 and is being republished for the anniversary of the September 11th terrorist attacks.

On September 12th, I found myself on the wrong side of carrying my parents’ refrigerator down the stoop of their Brooklyn home. As several of us moved it along the stone stairs, the weight of the refrigerator fell on my shoulders and it eventually went crashing forward onto the sidewalk by the fire hydrant, where we disposed of things that needed to be taken away.

The refrigerator broke because there was too much food in it. When there’s tragedy in South Brooklyn, neighbors bring food. Tons of it. The old, yellow Frigidaire couldn’t handle all that pasta, so it broke down and needed to be taken out.

So there I was, tossing the old fridge on the sidewalk, and when I caught my breath, I notice a white magnet with green lettering that read: “Being Irish, I have an abiding sense of tragedy, which sustains me through temporary periods of joy.”

As I walked back inside that Yeats quote stayed in me. I was sitting on the back porch, taking a pull of my Budweiser, when the phone rang. My heart dropped. My mother picked up the yellow-corded phone attached to the kitchen wall, and with relief announced to the crowd, “It’s only Uncle George on the phone. It’s nothing about Jimmy.”

My brother Jimmy had been missing since Tuesday. He worked on the 104th floor of the North Tower for a company called Cantor Fitzgerald. Jimmy was just a 23-year-old Manhattan College graduate trying to make it on Wall Street. We didn’t hear anything of his whereabouts after Flight 11 hit the tower, which made the ringing phone such a dagger to the heart — a dangerous chemical mix of dread and hope. Thinking of the destruction at Ground Zero, I felt a sharp jolt of heat well up in my chest.

I found myself staring at a piece of unharmed printer paper that was gently floating toward my backyard as I listened to the furious banter of friends and neighbors.

“Those poor people. They must have been so scared.”

“We’ll get revenge. This war will be over in a month.”

“That’s why Quinny’s in the Army. He’s going to kill all these terrorist bastards.”

I felt an invisible weight on my shoulders bigger than the refrigerator. My chest felt heavy as if being held down by The Great West Point Chain. The sharp jolt of heat in my chest turned into a volcanic explosion of warm blood to my head. Nausea settled in, as I was certain a pool of red and green bile would erupt out of my mouth at any moment.

I ran through the search party in the dining room and the congregation in the living room. I busted through the red, screeching screen door and down the stone stairs into the Brooklyn air. My head just followed my feet, and I didn’t know where I was running until I finally arrived at the basketball courts of Marine Park. I sat beneath an empty hoop to catch my breath. My chest lightened and the heat in my body seemed to pour out of the pores of my skin. In solitude, I was able to think and I came up with three goals:

First, I would go back home to try and lead my family through this.

Second, I would find my brother.

And third, I would go to war.

I would only achieve two of these goals.

Looking back, the wars seemed to come and go in a blink of an eye. I would go on to serve two deployments to Iraq as a soldier and one deployment to Afghanistan as a civilian advisor, and each time, I would feel the physical manifestation of the grief I felt after losing my brother.

In 2003, I remember feeling the heaviness in my chest when I told my soldiers that six of their brothers had been killed when a Chinook was shot out of the sky over Fallujah. I can still feel the warm flush of blood rising to my head as I packed their personal effects into duffel bags to send back home to their grieving families. Even as a staff officer in the Corps Tactical Operations Center on my second deployment to Iraq, a sharp jolt of heat would sting my heart every time there was another moment of silence for another soldier killed, which would happen up to six times a day. I would also tense up and clench my fists over the deaths of Iraqis and Afghans.

The heat in my body, the thickness of the chest, and nausea would worsen when I’d think of my close friend killed in Afghanistan back in 2012, eleven years after the North Tower collapsed with my brother inside of it. What was happening to my body during these moments?

I thought I’d figured it all out in one word: Guilt.

There are a lot of terminologies out there, from moral injury to traumatic guilt, but it seems that survivor guilt is the most well known in the veterans community. Survivor guilt most basically defined is “a deep feeling of guilt often experienced by those who have survived some catastrophe that took the lives of many others; derives in part from a feeling that they did not do enough to save the others who perished and in part from feelings of being unworthy relative to those who died.” Survivor guilt was once a symptom of post-traumatic stress disorder but now is classified as an associated feature under the umbrella of PTSD.

Since leaving the military and working in the veterans community, it seems time and time again in my conversations with veterans, anywhere from a Vietnam veteran to a young specialist right back from Afghanistan, the trouble seems to surround a decision they had to make in combat or the loss of a battle buddy. Iraq War veteran and Congressman Seth Moulton summed it up pretty well when he told The New York Times,

In my experience, the people who have post-traumatic stress, it doesn’t come back to just the violence, although that’s an important part of it. It’s all the emotion that’s wrapped up in the violence. I was in a lot of violence in Iraq. I don’t lose sleep over that. I think what people think about are things like “Why did my buddy get killed and not me?” “Should I have made that decision?”

In a research study conducted back in 1991 titled “Suicide and guilt as manifestations of PTSD in Vietnam combat veterans,” the findings reported: “Two distinct kinds of guilt played a significant role in determining the vulnerability to suicide among these veterans with PTSD: guilt about combat operations and guilt about surviving when others had died.”

Now that I have laid the foundation for the importance of guilt as it relates to PTSD and trauma, I must now tell you how dead wrong I was.

I was sitting in a conference room just off the Riverwalk in San Antonio, Texas when research professor Dr. Brené Brown explained that the thing to understand about shame is that it’s not guilt. Shame is a focus on self. Guilt is a focus on behavior. Shame is “I am bad.” Guilt is “I did something bad.” There’s a huge difference between shame and guilt and here’s what you need to know: Shame is highly, highly correlated to addiction, depression, violence, aggression, bullying, suicide, and eating disorders. Here’s what you need to know more: Guilt is inversely correlated with these outcomes.

Immediately I thought of my brother and how I felt about myself after September 11. I didn’t feel that I did anything bad. I felt I was bad. It should have been me. Not him. I was helpless, scared, and weak and I didn’t feel deserving of love, connection, and belonging. I placed no value on myself, which led to depression and aggression. I would lock myself in my room for days and not come out. I got into more fights in a year than Gerry Cooney had in his entire boxing career and I typically lost. I wanted to lose. I wanted the pain knocked out of me.

I thought going to war would save me, but it made things worse. I felt I wasn’t good enough, strong enough or simply enough to take care of my soldiers, while simultaneously figuring out how to exact revenge and “kill all these terrorist bastards.” Furthermore, I felt responsible for the lives lost in Iraq and Afghanistan. If Jimmy wasn’t killed then the wars would have never happened. As irrational and selfish as that might sound, it’s just what I felt.

Back in San Antonio, I was part of a group of leaders from the veteran service organization, Team Red, White & Blue, getting certified in Brown’s work on courage, vulnerability, shame, and worthiness. To teach us how to recognize our own physiological responses to shame, we broke into several groups and each group had to draw what shame felt like in our bodies. One by one, each group member described heaviness in the chest, the warm hot flush of the body, exhaustion, nausea, and feeling like you’re small and chained. I stood there in disbelief as each person’s experiences mirrored my own physical reaction to losing my brother. They were describing my physiological response to shame.

So after all of this, why does it matter?

As a society, but particularly in our military and veteran communities, we need to start talking about shame and confronting it head on. As Brown explained, shame doesn’t want to be spoken. In fact, her research shows that shame needs three things to grow exponentially: secrecy, silence, and judgment. We need to end our silence about shame. The good news is that the antidote to shame is empathy. If we can share our stories of shame and struggle with someone who can respond with compassion and connection, shame can’t survive.

In the end, shame is a formidable insurgent, rising in active revolt against our authentic selves, and we need to combat it with empathy and self-compassion, or else it will kill us. PTSD is more than just reactions to explosions and violence. We need our best minds to determine what role does guilt, survivor guilt, shame or even survivor shame play in veteran suicide and other bad outcomes.

Lastly, if there is even one veteran reading this, or even one human being, that feels shame over the loss of a battle buddy or friend, you should know that it’s not your fault. There are people out there who can and want to hear your story. Reach out. Get help. Be vulnerable. Be courageous.

As for me? I still think about Jimmy every day. On some days, the thought of my brother being scared in that tower can sometimes cripple me, but I refuse to let it define me. So I’m throwing my shame by the fire hydrant. I’m going to continue to work on being more self-compassionate, empathetic, and grateful. Only then will I have an abiding sense of joy, which will sustain me through temporary periods of grief.