The Battle For Space Dominance Is Real. Here’s Why A New ‘Space Force’ Is The Wrong Solution

Announced earlier this summer, President Trump's direction for a new Space Force has drawn an onslaught of criticism from lawmakers … Continued 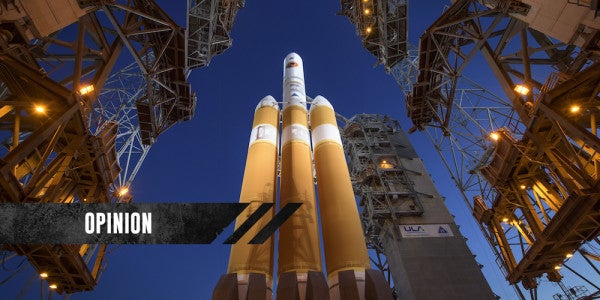 Announced earlier this summer, President Trump's direction for a new Space Force has drawn an onslaught of criticism from lawmakers and military leaders concerned about the cost and bureaucratic burden a sixth military branch would bring to an already complex and expansive Pentagon. And while an escalation of military power in space deserves a robust debate, many experts agree that the U.S. is ceding vital national security ground in this area to near-peer competitors, most notably Russia and China. Given our economic, scientific, and military reliance on unfettered access to space, a strong and focused military capability to safeguard national interests in this increasingly threatened domain is prudent.

Make no mistake: the U.S. needs to assert itself in outer space. But the creation of a new, separate military service branch is not the only means to achieve this. Instead, the Unified Combatant Commands (UCC) offer an existing model in which the U.S. could gain this much-needed capability and capacity in space without incurring enormous costs or bureaucratic growth.

Each Unified Combatant Command is led by a four-star general or admiral and its headquarters personnel are staffed from across the Defense Department's four military branches (the Coast Guard reports to the Department of Homeland Security in most circumstances). Broadly speaking, these organizations are the primary operational arms of the U.S. military.

UCC’s aren’t new, but they are absolutely essential to the modern U.S. military. This construct, modernized under the Goldwater-Nicholas Act of 1986, streamlined the chain of command to bypass inter-service rivalry among the military branches and successfully established unity of effort among the joint force within each respective geographic or functional area. Alongside technological and doctrinal innovation, the increasing interoperability of the US military's four branches within this model is widely credited with improved efficiency and lethality across the force. With growing power competition unseen since the Cold War, this is more essential than ever.

Related: The Truth About The Space Force Is Out There »

In the last three decades, the UCC’s evolved to address ever-changing U.S. national security priorities. U.S. Africa Command was established in 2007 given Africa’s growing importance to U.S. security interests, and U.S. Cyber Command was elevated to a Unified Combatant Command in 2018 due to a strategic requirement for greater military-led offensive and defensive cyber capabilities.

The establishment of the eleventh UCC, the US Space Command, is the logical continuation of this model and would likely integrate into the Defense Department far easier than the creation of a sixth military branch. This existing reform proposal would not only optimize efforts among two of the smaller Geographic Combatant Commands but would reduce existing bureaucracy and cost in order to offset the expenses of the new U.S. Space Command. If lawmakers and defense leaders are concerned about adding an eleventh headquarters of this size, perhaps the Pentagon could move ahead with combining U.S. Northern Command and U.S. Southern Command.

Under this model, a robust U.S. Space Command would be both geographic and functional in responsibility, making it the first combatant command of this type. Like a geographic combatant command, such as US Africa Command, it would be responsible for commanding and controlling US military forces in its area of responsibility. And like a functional combatant command that requires a highly talented and specialized pool of joint service members, U.S. Space Command would be staffed by specially screened, selected, and trained personnel from across the joint community that voluntarily apply for service within the space field.

“If lawmakers and defense leaders are concerned about adding an eleventh headquarters of this size, perhaps the Pentagon could move ahead with combining U.S. Northern Command and U.S. Southern Command.”

This would be similar to our cyber and special operations warriors, whom can be a member of any military branch but are voluntarily screened and selected for extensive and rigorous training to a jointly recognized operational standard within a high-demand specialty. These specialists then remain in their specific operational communities and are employed as members of joint task forces by the joint combatant commands. The diversity provided by qualified personnel from each service, whom each brings a subtle but important service and historical influenced cultural perspective, is considered a major strength of this system.

Furthermore, since the U.S. Space Command would be a joint entity, this model would allow each of the branches to retain space-focused sub-components, such as U.S. Marine Corps Space Command and U.S. Army Space Command, etc. This could potentially break-down to each of the existing military branch’s space sub-components taking on a certain responsibility within the joint command. The Air Force may lead research and development of missiles, satellites, navigation, and small craft flight, whereas the Navy would lead large craft flight and sustainment, and the Army and Marines would provide interplanetary ground troops. By not siphoning off these specialties to a separate service, a natural spirit of cooperative competition will drive innovation within the military space community. Ultimately, the joint approach results in a more integrated force that benefits from the competencies of each service.

The creation of a stand-alone space force would likely discourage a common understanding of space operations and employment across the joint community, which runs counter to the intent of Goldwater-Nichols and would reduce overall effectiveness and lethality across the force. As the Trump administration, Pentagon, and Capitol Hill proceed with the design and implementation of this new capability, they should rely on existing models where the military organizes and employs its military instrument of national power with proven lethality.

Maj. Nick Schroback is a U.S. Marine Special Operations Officer. Commissioned in the Marine Corps in 2007 through the NROTC program, he initially served as an infantry officer and deployed to East Africa and the Arabian Peninsula with a Marine Expeditionary Unit. He served at the Marine Corps Ceremonial Honor Guard in Washington, D.C. from 2010 to 2013 before transitioning to special operations in 2014. Since becoming a Marine Special Operations Officer, he has served in Afghanistan and throughout North and West Africa. He holds a Masters Degree in International Relations from the Georgetown University School of Foreign Service. The opinons expressed here to not reflect those of U.S. Marine Special Operations Command or the Department of Defense.