A couple of months ago, I read a prepublication copy of “Ashley’s War,” by Gayle Tzemach Lemmon; the story of … Continued 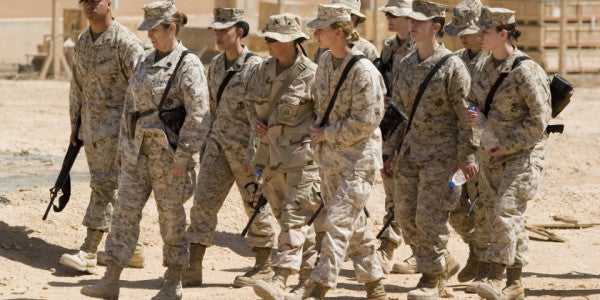 A couple of months ago, I read a prepublication copy of “Ashley’s War,” by Gayle Tzemach Lemmon; the story of a team of female soldiers who were embedded with Army Rangers in 2011. The book, which was released last month, is named in honor of Lt. Ashley White, who was killed in action with two Rangers during a night raid in Afghanistan on Oct. 22, 2011. I wrote the author and asked her if it was possible to replace the word “girl” with “women” throughout the book before it was published. I told her that many of us in the military have worked hard to get men and women to stop calling us girls.

Lemmon thoughtfully responded that she had used the word intentionally because that was the way the women in the story had referred to themselves. She was trying to stay true to their voices. I’m sure she is correct, which raises a couple of important questions. Why would accomplished adult women refer to themselves as girls, and is this indicative of a larger socio-cultural problem in the military?

When men in the military refer to other men as boys it’s usually done in a training environment to reinforce a trainee’s position as a learner or subordinate who hasn’t achieved knowledge or full status. Sometimes men call each other boys in a pejorative way, to chastise each other for foolish, childlike or immature behavior. When women call each other girls, it’s rarely done intentionally to reinforce a power relationship or to point out immature behavior. Instead, it is done unwittingly, but with the same unrecognized effect.

All of the women in “Ashley’s War” are soldiers and combat veterans. Lemmon speculated that the women referred to themselves as girls intentionally in an effort to reclaim the word much like some minorities use racial slurs non offensively. I disagree. I think women call themselves girls because we have been socialized to undervalue ourselves and it diminishes us in very subtle but insidious ways.

In 2013, Maj. Gen. Bennet Sacolick, from Special Operations Command, submitted both written and oral statements to the House Armed Services Committee about women serving in ground combat units. During his testimony, he provided some anecdotal stories from his own experience with the women who served on White’s team and teams like hers during which he applauded their capabilities. He also repeatedly referred to the soldiers as girls. Although his written statement refers to female soldiers as women, his oral comments present a stark reminder that many senior leaders think of women soldiers as girls. Clearly, whoever prepared his written statement knew the difference.

In another instance, two weeks ago, retired Adm. Eric Olson, a former SOCOM commander, gave remarks on the Hill about the women who served with White — he never called them girls.

Unfortunately, he made many other remarks about women that demonstrate a paternalistic treatment of servicewomen; most directly, that he does not agree with the integration of women into frontline, close-combat positions. Olson stated that he believes that women should serve in support roles as enablers who help men accomplish their missions and not as primary combatants. Specifically, he said, “I think that men, in virtually every society and every species, are reluctant to trust their lives to women in the same way they do to men.” He further went on to refer to women as “too special” to be lost in combat.

His comments about what female soldiers should and shouldn’t do are indicative of an attitude that men who are older and wiser must decide what servicewomen are allowed or not allowed to do. Needless to say, the two women, both Army captains, who were on that panel strongly objected to Olson’s comments about what they could or should do.

If we are to get past the unequal treatment of servicewomen, we must begin by examining the language that we use. What we call each other matters. Neither men nor women in the military should refer to servicewomen as girls.