I’ll make this short. Nobody likes a long, forced display of emotion. Except Donald Trump. The stock market, previously the … Continued 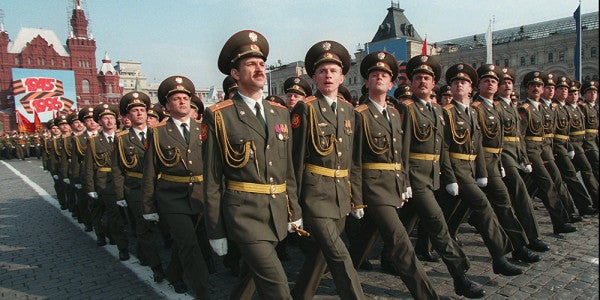 I’ll make this short. Nobody likes a long, forced display of emotion. Except Donald Trump.

The stock market, previously the president’s favorite benchmark of national success, is tanking severely and whiplashing back up, and no one seems to fully understand why. Sixty-four thousand Americans are dying of drug overdoses per year — 175 per day, double the rate a decade ago — and nobody knows how to stop them. The suicide rate in America is higher than it’s been in decades, and it’s highest in the rural areas that economic progress and politicians of every stripe have left behind.

RELATED: Trump Might Not Be Giving Us A Parade We Want, But It’s The One We Deserve >>

This is the America that our military is defending. It is not going well. The Afghanistan War, the United States’ longest in its history, has no obvious end; the generals in charge now were field grade officers when the war started. The forever war is turning out so many veterans that the VA can’t keep up — and the department is largely trying to fire its way out of the problem, without filling any of its top spots or hiring for any of its nearly 50,000 job vacancies. Some American war veterans are facing deportation. Others, with other-than-honorable discharges, are foundering with next to no help. The U.S.’s forward-deployed naval force, steaming away to back up the belligerence of a novice president’s tweets, is stretched to its breaking point, with groggy nav teams breaking ships and killing sailors. The entire military establishment, shot through with waste, fraud, and abuse, can’t even audit itself, and Congress is too broken to even fund it, except through short-term continuing resolutions, because we have reached a point in America where Americans have their political teams to root for and no incentives to be humane or conciliatory to each other for a greater cause.

Let’s do it for the duly elected commander-in-chief, who was born on third base and blames the world for not just scoring it as a run. Whose entire “military” service consists of a private boarding-school diploma and five draft deferments. Who used the commissioning ceremony of the Coast Guard Academy’s graduating cadets to bitch about the media’s coverage of him, when he wasn’t confusing the Coast Guard with the Navy. Who couldn’t stand still or remember the words for the National Anthem at Arlington on Memorial Day next to his secretary of defense and Joint Chiefs chairman (but he’s still pretty sure NFL players of color who don’t show sufficient anthem-patriotism should be fired). Who doesn’t have a clue what evening colors are, but surmises they must be for him. Who accessorizes with troops. Who likes “people who weren’t captured;” tells Gold Star families he’s “made a lot of sacrifices;” calls safe sex in the 1990s “my personal Vietnam;” and blames “the generals” for battle casualties.

The Army subreddit is looking forward to the military parade. pic.twitter.com/hjTzBRUtKp

Let’s throw a military bash with missiles and troops and bands for this rampaging golf-course rentier, because nobody’s ever done anything like that before, except the Soviet Union, the People’s Republic of China, the Democratic People’s Republic of Korea, Cuba, Libya under Qaddafi, Iraq under Saddam, Zaire under Mobutu, the Nazi Reich under Hitler, Spain under Franco, Chile under Pinochet, Iran under the Shah, Uganda under Idi Amin, Yugoslavia under Tito, Romania under Ceausescu, Serbia under Milosevic.

Let’s do it like France does it on Bastille Day, because Lord knows that’s really fixed their country and the imperial colonies they occupied. Let’s emulate the fading great power that tried vainly to “win” Vietnam before handing it off to us shrugging, and these days can’t decide if its fifth republic will be socialist or ultraconservative or somewhere in between.

Let’s pause the wars for a minute to garrison the troops, spit-shine them, transport them, train them for a new pompous and circumstantial evolution, invite the networks, adore the leader, and then go back to failing at war, a few million dollars lighter, to get a poll bump for a man who loves the troops and America but derides as “the deep state” all the constitutional oath-takers who are investigating his campaign’s connections to Russia; his reliance on a national security adviser compromised by multiple foreign states; his pressurings and firings of top investigators; his role in making false statements about campaign meetings with Russians promising dirt on his opponent.

Let’s make America a banana republic. Let’s have a fucking parade. For Don.

Update: 1:10 p.m. EDT: This post has been updated to clarify that 64,000 Americans die of drug overdoses annually.