The Marine Corps has reinvented itself throughout its history. The new Commandant is doing it again.

Berger has rightly decided that the way the Marines' plans for amphibious assaults isn't going to work going forward, as a "Sands of Iwo Jima" redux will end with thousands of dead Marines and Sailors at the bottom of the ocean. 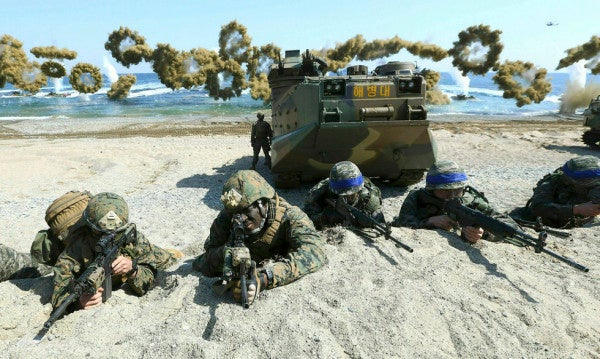 Marines haven't exactly shaken their reputation as crayon-eating meatheads in recent years. Just look to the many scandals over cultural issues like misogynistic Facebook pages and Marines United.

But the Corps recently got a new Commandant, Gen. David Berger. Berger has jumped into the fire with both feet. Only a few days on the job, he has put out a series of initiatives in his Commandant's Planning Guidance (CPG) that point to a period of great change for the Corps.

Through its 243 years, the Corps has had to reinvent itself countless times.

Just in the last century, the Corps went from a shipboard security force to a truly expeditionary force in World War I to inventing modern amphibious doctrine in World War II to pioneering the helicopter borne assault in Korea to counterinsurgency in Vietnam to the modern Marine Expeditionary Units on standby around the world today.

Berger has rightly decided that the way the Marines' plans for amphibious assaults isn't going to work going forward, as a “Sands of Iwo Jima” redux will end with thousands of dead Marines and Sailors at the bottom of the ocean.

The dirty secret behind amphibious assaults is that the development of Anti-access/Area Denial, or A2AD, capabilities by many possible adversaries has made it a lot harder to sneak up and attack from the sea. Berger's planning guidance states that he wants to get away from the “exquisite and the few” in favor of the “affordable and plentiful” when it comes to amphibious shipping. He's explicitly looking beyond the cut and paste of battalion plus squadron plus three gators equal MEU.

The three-ship ARG/MEU isn't going to be the stock solution anymore, orin the words of Berger, it “no longer has the same relevance.”

If you put all your eggs in one basket, you're asking for them to be broken. While not committing to a particular concept of employment, Berger's guidance is that the Marine Corps Air Ground Task Force, or MAGTF, isn't the answer to every single question. Talk to any Marine, and he can't shut up about the “Mag Taff.”

The same thing goes for the Marine Expeditionary Force, or MEF. The other thing beaten into Marines is that they fight as MEFs. Berger is also slaughtering that sacred cow. The WestPac-based III MEF is going to be the “focus of effort,” while all others will be task-organized for their AORs — every MEF is going to look significantly different — a step back from the mostly uniform and modular Marine Corps organizational structure.

To be clear, Berger has said that he's willing to take some chances.

“If provided the opportunity to secure additional modernization dollars in exchange for force structure, I am prepared to do so,” he wrote. The Air Force tried to do that and ended up with not much modernization but a lot less force structure. But Berger seems confident that he can pull it off.

The Corps has always valued quality over quantity, and a clear institutional direction is essential to pulling that off.

Beyond just guns and ships, Berger has also put out a clear message about the value of people. His trial balloon of offering a full year of postpartum leave has gotten a lot of attention. In the big picture, Berger recognizes that the Corps is competing for top talent with every other service and private company. Most importantly, he promises to modernize the evaluation system and recognize that making Marines retire 20 at years of service is often leaving their best years on the table. While not abandoning the culture of the Corps that has kept it in good stead for so long, he has recognized the reality of market competition.

The Corps has always prided itself on being the hardest service to join and serve in, to the point that “embrace the suck” is its unofficial motto. Keeping the pride of being the toughest while incorporating changing societal norms is going to be a tough, but necessary, needle to thread.

Belying its image as a bunch of knuckle draggers, the Marine Corps has a long history of intellectual rigor and dissent. The most famous examples are beaten into every Marine. Maj. Pete Ellis saw the future of war in the Pacific while drinking himself to death in the tropics, which is, in fact, every Marine's fantasy. Lt. Gen. “Brute” Krulak saved the Marine Corps from dissolution after World War II. Gen. Al Gray rescued the Corps from post-Vietnam malaise and made the Corps a true expeditionary force. Even the professional journal of the Corps, the Marine Corps Gazette, goes beyond parroting the official line — witness it publishing a piece on the benefits of microdosing acid. Similar dissent is usually not tolerated in the other services.

The Army tried to reinvent itself with Future Combat System. It failed. The Navy tried to get smaller and faster with the Littoral Combat Ship. It failed. The Air Force tried to trade structure for modernization and got neither.

The Marines have been forced to defend their service's existence since 1775. That institutional paranoia might be the edge they need to make their reorganization succeed where everyone else has failed.

No plan survives first contact with the enemy, which, in this case, means Congress. Perhaps Berger's plans will die the same death as SecDef Carter's “Force of the Future.” Still, it's a bigger play than the other services have been willing to make.

If the Marine Corps fails to stay relevant, it won't be for lack of boldness.