This Army vet died of an overdose in his jail cell. He deserved better than his guards’ laughter

[shortcode-Op-Ed-disclosure] “I understand how difficult the transition can be, but we are still responsible for our own choices regardless of... 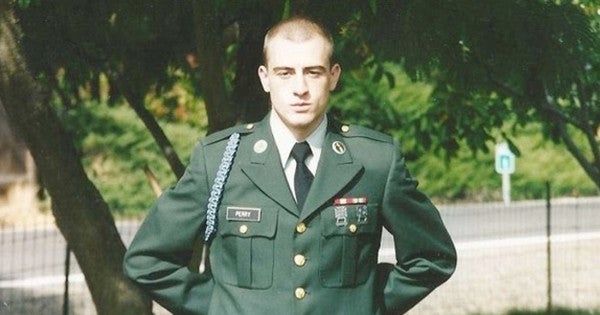 “I understand how difficult the transition can be, but we are still responsible for our own choices regardless of anything we may have witnessed or done overseas. He chose to put that poison in his body. He is responsible for his own death.

“He absolutely deserved to die over his drug problem, because that is exactly what killed him. I'm not saying that that is fair, but that is life. Grow the f*** up.”

This judgment came from an anonymous poster in response to, “An Army Veteran Was Left To Die In A Cell While His Jailers Laughed And Took Video.” A recent Task & Purpose article documented Purple Heart recipient Bryan Perry's 2016 death.

In a viral video, Clackamas County deputies laugh as Bryan Perry gyrates on a bench with the classic symptoms of stimulant overdose: uncontrollable body movements, inability to stand, and incoherence. Yet jail personnel did not take him to the hospital. They chose instead to lock him in a padded cell and film him. One deputy suggested Bryan be displayed at schools to show kids the dangers of drugs, “Look what I got for show and tell today.”

Bryan died of cardiac arrest. He had ingested methamphetamine, bath salts, and heroin. He was 31.

I am accustomed to hearing comments such as those of the holier-than-thou poster. During the five years I presided as judge over the Riverside County Veterans Court, I supervised hundreds of veterans suffering from post-traumatic stress disorder and drug addiction. What surprises me, though, is that the harshest judgments generally come from veterans. They do not understand that PTSD and addiction are diseases.

Bryan spent his eighteenth birthday — April 7, 2003 — on an Army convoy from Kuwait to Iraq. In September 2003, he was wounded. He received an honorable discharge and left service with PTSD.

Bryan's situation was not unique. According to a 2008 study by the Rand Corporation, 20% of Iraq and Afghanistan veterans are suffering or have suffered from PTSD. Other studies report higher numbers. One by Yale University published in the March 2014 edition of Substance Abuse and Rehabilitation found, “Among male and female soldiers aged 18 years or older returning from Iraq and Afghanistan, rates range from 9% shortly after returning from deployment to 31% a year after deployment.”

Yet 50% of these veterans, including Bryan, do not seek treatment, often because they do not know they have PTSD. According to Dr. Michelle Spoont, a clinical and research psychologist at the Minneapolis VA Health Care System, “We're finding out that patients know something is wrong, but they don't know what it is. They may see their peers struggling as well and not realize there is a problem.”

One veteran I helped refused to travel the freeways of southern California because he would panic under overpasses. Another would have a flashback at the smell of exhaust. It was thick in the air when the IED detonated, killing his best friend.

Normal to these veterans is seeing terrifying images that are not there. The veteran's relationships, employment, and health fall apart. Parents who sent a healthy high school graduate to the military get back someone they fear and do not recognize.

To alleviate these symptoms, veterans like Bryan often turn to alcohol, methamphetamine and other illegal drugs.

Why? Because these substances work. Snort methamphetamine and crushing depression and sadness are gone. A veteran climbing walls of anxiety relaxes after shooting up heroin. Down a pint of hard liquor and flashbacks go away. This is what we call “avoidance.”

But this self-medication is akin to throwing gasoline on a fire. Alcohol and illegal substances make the classic symptoms of PTSD–irritability, aggression, hypervigilance–so much worse. And veterans with unlucky genetic or psychological makeups become addicts, Bryan being one of them. He found himself caught in a world of PTSD terror and addiction.

To suggest Bryan used because he was less than the rest of us is at best naïve. At worst, it is callous and cruel. Watch him on the video. Would anyone choose to live like that?

In our court, we did not label veterans as losers responsible for their predicament. We saw their crimes as health problems. We did not judge. I told the veterans before me I was not looking at criminals. Instead, I saw the young soldiers who protected me when I served in Baghdad. I saw heroes who had stumbled, brothers and sisters in arms that needed help.

We supported them through an intensive eighteenth-month treatment plan developed by mental health and addiction experts. We did pretty well. Our recidivism rate after three years was 15%. By comparison, the California Department of Corrections has a recidivism rate of 65%.

With over 400,000 veterans returning with PTSD from Iraq and Afghanistan and a readily available supply of illegal street drugs, we stand on the edge of a huge future problem. There are thousands of Bryans out there. America's response should be treatment and compassion, not harsh armchair judgments.

Secretary of Veterans Affairs Eric K. Shinseki said it best: “This nation has a solemn obligation to the men and women who have honorably served this country and suffer from the often devastating emotional wounds of war.”

I wished we could have helped Bryan Perry. RIP, Brother.

E. Johnson is a California Superior Court Judge. He presided over the Riverside County Veterans Court for five years, supervising the recovery of combat veterans suffering from post-traumatic stress disorder and other mental health issues. He is a retired colonel of the United States Army Reserve, an Iraq War veteran, and a graduate of the United States Army War College.