Can Trump Come Up With A Comprehensive Strategy To Save Afghanistan?

The Trump administration is in the final stages of a review of its Afghanistan and Pakistan strategy. There appears to … Continued 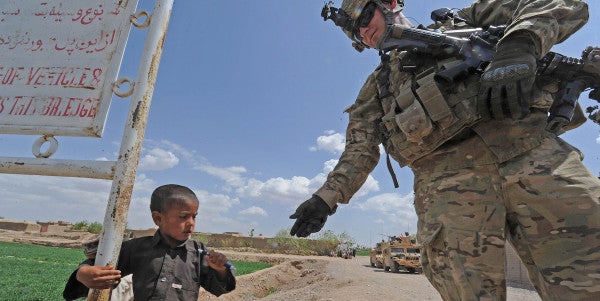 The Trump administration is in the final stages of a review of its Afghanistan and Pakistan strategy. There appears to be a consensus in favor of a modest surge of U.S. and NATO forces, perhaps deployed at the brigade or even battalion level with Afghan forces as part of an expanded train, advise and assist mission. Other complementary options are being considered, including a tougher approach toward Pakistan, possibly involving a renewed drone campaign in the country and the option of, down the road, declaring Pakistan a state sponsor of terror.

The desired end state, it appears, remains unchanged: to halt or reverse the advance of the Afghan Taliban and open up an opportunity for peace talks. But President Trump may end up feeling that some career bureaucrats are trying a bait-and-switch approach on him: offering a winning strategy that requires a low cost in terms of initial troop deployments, while removing time limits on the U.S. engagement, with the result being that Trump owns the war and is compelled to raise troop levels as conditions in Afghanistan inevitably worsen. Indeed, the U.S. intelligence community has assessed that the strategy proposed by the Pentagon would actually require the deployment of fifty thousand U.S. troops—far more than the five thousand requested.

A small constituency in the White House, led by chief strategist Steve Bannon, fears that the United States will get further bogged down in Afghanistan, sending precious American lives and money down an endless pit. Within Congress, there are those on both sides of the aisle who concur to a large degree with the Bannonites. And while few, if any, influentials are calling for an immediate withdrawal from Afghanistan, there is a critical mass that is asking for a greater clarity of mission and see little logic in doubling down in an unwinnable war in a landlocked country of little long-term strategic significance.

The case made by the Afghanistan skeptics ought to gain a greater hearing. Indeed, there are three major potential threats that have yet to be addressed meaningfully, if at all, in the present debate on Afghanistan. These threats should instill a greater sense of caution as the Trump administration sets its course in both Afghanistan and Pakistan.

One risk looming in Afghanistan is the growing influence of Iran, which is positioned to have a larger—if not dominant—role in the country over the medium-to-long term.

In 2016, Iran became Afghanistan’s largest trading partner, eclipsing another Afghan neighbor, Pakistan. Afghanistan has sizable trade deficits with both Iran and Pakistan, but its balance of trade with Iran is far more one-sided. According to the Afghan government, Afghan exports to Iran in 2016 totaled around $20 million, compared to $1.8 billion in imports from Iran. In contrast, in 2015, Afghanistan’s exports to Pakistan were valued at $226 million, compared to $1.35 billion in imports from Pakistan.

Afghan trade with the outside world is being increasingly routed through Iran. The reasons are twofold. One, official border crossings on the Afghanistan-Pakistan border have been closed for much of the past two years due to tensions between Kabul and Islamabad. Two, to reduce dependence on Pakistan, Afghan president Ashraf Ghani has sought to use the Iranian ports of Bandar Abbas and Chabahar, as opposed to the Pakistani port of Karachi, which is the closest port to most Afghan cities.

Iran was once seen by some in the United States as a force for stability in Afghanistan working in parallel with U.S. efforts after 9/11. But Iran has stepped up its support for the Afghan Taliban, offering the group financial assistance and weapons. Iran allegedly now even hosts training camps for the Taliban.

At the same time, Iran operates a brigade of Afghan Shia in Syria—the Liwa Fatemiyoun—recruited from Afghan migrants and refugees in Iran, as well as poor Shia in Afghanistan. Beginning as a small brigade of three thousand to guard the shrines particularly holy to Shia Muslims, the Liwa Fatemiyoun is estimated to have upwards of twenty thousand personnel. Compare this to the strength of the Afghan Taliban, which is believed to have around thirty thousand full-time fighters. The Liwa Fatemiyoun has played a frontline role in battles in Allepo, Homs, Palmyra and elsewhere. And in March, Reuters reported that Tehran has sent Afghan specialists from the Liwa Fatemiyoun to advise and train the Houthis in Yemen. Both the growth in the size and expansion of the use of the Fatemiyoun are worrisome.

Iran has other means of influence and control over Afghanistan. While Pakistan’s pressure on Afghan refugees—resulting in the repatriation of six hundred thousand Afghans last year—has received much press attention, Iran has deported 130,000 Afghans this year and aims to kick out as many as six hundred thousand Afghans by the year’s end. Forcible repatriation of Afghans appears to be far greater on the Iranian side.

Water is another potential tool Iran could use against its poorer, weaker neighbor. Afghanistan’s economy is agriculture-driven. But as a result of poor governance and decades of conflict, it underutilizes water resources shared with Iran. Agricultural reform and new irrigation projects are key toward sustainable growth in Afghanistan. But Iran has threatened to restrict water flow into Afghanistan if Kabul constructs a dam along the Helmand River. Some even claim that Iran is supporting the Taliban to sabotage these hydroelectric power and irrigation projects in Afghanistan.

A second potential threat on the horizon is the resurgence of terror inside Pakistan, if Islamabad is pressed too hard to take coercive action against Afghan militants in its territory. Islamabad has provided an enabling environment for the Afghan Taliban in its border regions with Afghanistan to prevent India from gaining a foothold on its northwestern flank. But the insurgency is autonomous from Pakistani control and has diversified ties beyond Pakistan to include the once hostile Iran.

In 2015, the Pakistani government used pressure tactics to bring the Afghan Taliban to the negotiation table as part of exploratory talks that also included the Afghan and U.S. governments, only for elements of the Afghan government to sabotage the process. The next year, the United States killed Afghan Taliban leader Mullah Akhtar Mansour in a drone strike when he reentered Pakistan from Iran.

Islamabad now appears reticent to assume a prominent role in the Afghan reconciliation process. Given the strength of the Afghan Taliban on the battlefield—they control or contest roughly 40 percent of the country—there is little incentive for the group to resume exploratory talks with Kabul. If Pakistan adopts a hard approach toward the Afghan Taliban, the insurgent group could aid anti-state jihadists inside Pakistan or strengthen cooperation with Iran. Down the road, if the Kabul government fractures or reconciles with the Afghan Taliban, they could partner against Pakistan.

This is plausible given that the political leadership in Afghanistan is largely composed of ex-jihadi leaders. Unlike the anti-Soviet jihad, the current war in Afghanistan is not being fought between “godless” Communists and Islamists. Afghanistan’s intelligence agency, the National Directorate of Security (NDS), has demonstrated its capability in sponsoring jihadist groups against the Pakistani state. It has not only supported the Hakimullah Mehsud faction of the Tehrik-e-Taliban Pakistan (TTP), via his right-hand man Latif Mehsud, it has also provided refuge to leaders of other TTP factions, including Faqir Muhammad, Maulvi Fazlullah and Omar Khalid Khorasani. The NDS also hosted Pakistani Taliban commanders who would then go on to form the ISIS network in Afghanistan. And, in conjunction with the Central Intelligence Agency, the NDS has supported a Taliban splinter group.

One final threat is that of civil conflict reemerging between power brokers invested in the current regime in Afghanistan. In 2014, Afghanistan averted a civil war as a result of a power-sharing deal between the two presidential race finalists, Ashraf Ghani and Abdullah Abdullah, negotiated by then-U.S. Secretary of State John Kerry. Ghani, who serves as president, has not kept his end of the bargain with Abdullah, who was designated as chief executive officer. Not only has Abdullah been sidelined, but Ghani could effectively replace him with a rival, Atta Noor, a northern strongman. Both Abdullah and Atta are from the Jamiat-e Islami party.

Ghani’s relations with Atta have been complicated by the Kabul government’s peace deal with Gulbuddin Hekmatyar, an insurgent leader who was a dominant commander during the anti-Soviet jihad and subsequent civil war. Hekmatyar triumphantly returned to Kabul last month with a massive armed convoy. In his address before an audience that included Ghani, Abdullah and former Afghan president Hamid Karzai, Hekmatyar audaciously challenged the legitimacy of the Ghani-Abdullah power-sharing deal and called for a strong central government. Non-Pashtuns in Afghanistan, including those in the Atta-led Jamiat-e Islami party, instead favor decentralization and a parliamentary system.

The academic-technocrat President Ashraf Ghani has initiated a game of political musical chairs. But given that he, unlike Hekmatyar and other major power brokers, has no organic base, he may be the one who ends up without a seat after the next realignment. Hekmatyar, prone to political betrayal, could challenge Ghani by mobilizing support among former allies who have proliferated the corridors of power after the U.S. invasion. Pashtuns who long for a strong, effective leader may also rally around him. This would undoubtedly result in Afghanistan’s non-Pashtuns banding together in reaction.

Rather than build trust and institutionalizing political norms in a divided country, Ghani is keen on consolidating power. But by firing dozens of civilian and military officials, Ghani has developed an exaggerated sense of his control beyond Kabul, all the while earning many more enemies who could bandwagon against him. Political instability in Kabul is a prerequisite for peace with the Taliban, who are unlikely to seek a deal with a sinking ship.

The most prudent path for the Trump administration in Afghanistan would involve a combined political-military-diplomatic approach to provide space for a renewal of peace talks between the Afghan Taliban and the Kabul government and an eventual U.S. withdrawal.

Additional coalition forces should be deployed to deny the Afghan Taliban control over Kabul and the provincial capitals over the next two fighting seasons. The Trump administration should also swiftly appoint a U.S. ambassador to Afghanistan empowered to use both carrots and sticks to ensure that the unity government survives, electoral reforms are passed, and parliamentary elections are held in 2018, followed by presidential elections in 2019.

It is also critical that the State Department and the International Security Assistance Force work to build cooperation between Afghanistan and Pakistan over their shared border. The two countries now frequently exchange mortar fire. Recently, Afghan forces attacked Pakistani census workers and the security team assigned to them in Balochistan, killing nine civilians. Previous attempts by Pakistan to install biometric systems on its side of the Chaman-Spin Boldak crossing have been resisted by Afghan forces. In 2007, several thousand Afghans attacked and destroyed the biometric system installed in Chaman.

Finally, while the reconciliation process must be Afghan-led, it is important that regional power brokers be included in a multilateral dialogue process, to achieve a negotiated settlement to the war. Such a process must not only include Pakistan, but Iran and Russia as well. If left out, they could play the role of spoiler. The last thing the Trump administration would want to do is further escalate the level of violence in Afghanistan and fall into a long-term occupation of a landlocked country that is also one of the world’s most corrupt and poor.