One of an American commander in chief’s most solemn duties is to preside over the nation’s Memorial Day honors at... 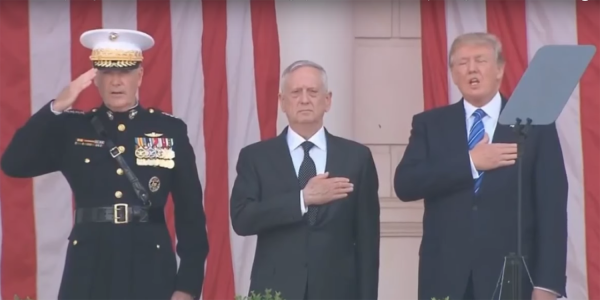 One of an American commander in chief’s most solemn duties is to preside over the nation’s Memorial Day honors at Arlington National Cemetery. There’s a speech; a wreath-laying; and, of course, a rousing rendition of the national anthem as the gathering comes to attention — one of the first honors a young service member learns to render. How did president Trump do in his second major encounter with Gold Star families?

What's going on there? PATRIOTISM, right?

This guy likes it:

President Trump is so filled with patriotism that he sings along to the National Anthem. His love of country is truly refreshing.#MAGA 🇺🇸 pic.twitter.com/IvOEBjWwXB

That's one piping hot take! Hard to tell if this guy likes it, though:

Be polite, be professional, but have a plan to kill everybody you meet.Screenshot

What do you think was on Maddis' mind when Trump was fidgeting and singing during a memorial day service?

Let's accept on face that the president — who likes “people who weren't captured,” tells Gold Star families he's “made a lot of sacrifices,” calls safe sex in the 1990s “my personal Vietnam,” and blames “the generals” for battle casualties — just swayed along to the Star-Spangled Banner at Arlington, beating a rhythm with the fingers on his chest, warbling the words out of patriotism. Selfless, altruistic patriotism. What other explanation could there be, anyway?

"NSC officials have strategically included #Trump's name in 'as many paragraphs as we can because he keeps reading if he's mentioned'" https://t.co/5ZCtuAZevI

“Leaders have been told to hold normally windy remarks to just two to four minutes to keep Trump’s attention” https://t.co/R74qd7lOQZ

Trump appears to shove Montenegro PM so he could be in front of NATO group https://t.co/CJYJJaPahY pic.twitter.com/53sIskTiBM

The hits keep on coming. pic.twitter.com/tdFXc1NGdt

In fairness to Trump, he did a lot of other stuff at Arlington, too, like laying the wreath at the Unknowns and assisting Tea Party Dot Org in selling its #1 Rated All Natural Smart Pill: