We Don’t Need A Military Parade. We Need Mummers

If you hear a dull thud roughly every two seconds, that’s the sound of your favorite Pentagon correspondent banging his... 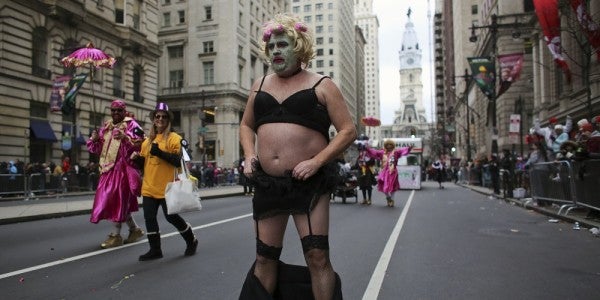 If you hear a dull thud roughly every two seconds, that’s the sound of your favorite Pentagon correspondent banging his head against the desk every time someone utters the word “parade.”

Ever since President Donald Trump announced his desire to hold a military parade in Washington, D.C., we in the media have been salivating like Pavlov’s dog every time we hear mention of the processions. (Presumably, Pavlov owned a Basset hound, as they drool a lot).

Defense Secretary James Mattis initially dismissed reports that the parade would cost an estimated $92 million, telling reporters on August 17: “Whoever told you that is probably smoking something that is legal in my state but not most states.” That same day, the president tweeted that he had canceled the parade because officials in Washington, D.C., had quoted the White House a “ridiculously high” price for the event, a claim defense officials later contradicted.

Regardless of how much the parade actually cost and who quoted what figure to whom, we can agree that the proposed parade has done more to divide than unite us. That’s why the time has come for all sides to stop arguing, strap on ostrich feathers and strut down Pennsylvania Avenue while playing banjos and trombones — because what this country really needs is a National Mummers Day Parade to heal our great divide.

Right now, you are probably saying: “Jeff, you are drunk – or you popped Ambien and now you’re in that zombie state where one babbles like a psychotic while actually sleeping.” Amazingly, this reporter’s editors said the same thing, but there is actually some method to your humble narrator’s madness, so bear with me.

The Mummers Parade is a South Philadelphia tradition that began more than 100 years ago, when working-class residents donned extravagant costumes, got piss drunk, and took over the City of Brotherly Love.

“Indeed it’s a collection of blue and white collar folk, deliberately preparing to creatively and colorfully strut like peacocks in order to ring in the New Year,” a military officer who comes from a proud family of Mummers told Task & Purpose. “There are three divisions: The Comics (mostly drunk clown-like folk); the string bands (serious part-time musicians), and the fancy brigades (big floats on wheels gives short performances). All this would still probably be less expensive than the planned parade.”

This is precisely the type of spirit that our beloved country needs right now. The president’s critics complained the proposed military parade would look to authoritarian. U.S. troops grumbled about having to train long hours to march in step in their dress uniform.

But who would object to the idyllic scene of longshoremen dancing from Capitol Hill to the White House – including a few stranglers too inebriated to play their banjos, who take turns urinating on the sides of Capitol office buildings – all while children watch with growing awe!

Generations of Mummers have worn costumes with sequins and feathers to strut on New Year’s Day, said Murray Dubin, author of South Philadelphia: Mummers, Memories, and the Melrose Diner. Their costumes resemble what you might see at a Chinese New Year parade or at Carnival in Brazil.

Although Mummers clubs used to be made up exclusively of working class Philadelphians, they now include doctors, lawyers, and other white-collar professionals, Dubin told T&P.; Some clubs hire dance consultants to teach members complicated routines, which they perform all over the world.

“Europeans don’t know what to make of them and love it,” Dubin said. “The music is happy. It’s hard to stand still when you’re at a Mummers parade because you want to dance or ‘strut,’ which is what Mummers do. I am sure that the president of the United States with his orange-like hair would just love all the colors.”

So the ball is in now President Trump’s court. We don’t need to drive tanks through Washington, D.C., to prove that this nation is strong. We need colorful costumes to show that America is more than just a collection of red states and blue states. And we need to strut with increasing confidence towards a future that promises a better tomorrow and a crushing hangover. If the Mummers have no shame, then neither should our blessed country.