Trump Says He’s A Master Negotiator. He’ll Need Every Ounce Of It With North Korea.

In the days after the Sept. 11 terrorist attacks, I led a Combat Reconnaissance Aircrew in an intelligence collection mission... 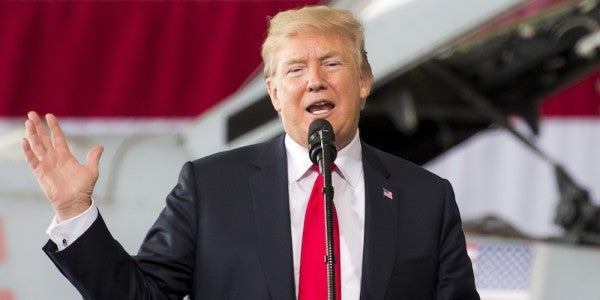 In the days after the Sept. 11 terrorist attacks, I led a Combat Reconnaissance Aircrew in an intelligence collection mission against North Korea. Before takeoff, I briefed my crew. “Keep your guard up,” I said. “We are facing an enemy that is still at war with the United States. They may think America is vulnerable right now, but that is why we are here. Treat every decision like your life depends on it.”

Today, America finds itself playing a game of nuclear brinksmanship with that same rogue regime. But Trump’s latest overture, however impulsive, might be our best opening in decades to walk back from the brink. In the 1960s, Lyndon Johnson and the DC establishment believed that China was our greatest foreign nuclear threat and war was inevitable. But it was Richard Nixon, the hawk, the rule-breaker, who saw this as an opportunity to open China to the world. President Donald Trump’s approach to governing mirrors Richard Nixon’s in this respect—and it’s time for Democrats to take note.

This is a risky decision. However, both South Korea and Japan have praised the President for his actions. Trump’s strategy of maximum appeasement is not one that I agree with. He is willing to grant North Korea a presidential visit, a multinational summit, overlook human rights violations, and presumably take reunification off the table and begin normalizing relations.

One thing is clear—this is a bold move that must lead to historic results.

President Trump must come home with a peace treaty that ends the Korean War and denuclearizes North Korea. Anything less will weaken America’s negotiating position and bring us closer to war. Therefore, he must succeed where Barack Obama, Hillary Clinton, Bill Clinton, Madeleine Albright, and countless other Democrats, Republicans, lifelong diplomats, and Korean political experts have failed. This is Trump’s moment to shine.

I served nine years as a Navy pilot, leading combat reconnaissance missions against North Korea. I know the costs of war. When it comes to North Korea, diplomacy is our best option and I applaud Trump for seeking a diplomatic solution. A master negotiator, it’s time for Trump to follow through on his promises to end our conflict with North Korea and we should hold him accountable for the outcome of this summit. I pray for him to succeed. I pray that he treats every decision, like my aircrew did on that mission off North Korea, as if lives depend on it.

Because in a game of nuclear brinksmanship, all of our lives may depend on it.

Ken Harbaugh is a former Navy pilot and disaster-responder. He flew reconnaissance missions in the Middle East and off of North Korea. Ken is the past President of Team Rubicon Global, a disaster relief organization that has helped train over 50,000 veterans to deploy in emergency response teams around the world. Together with his wife, Ken is the author of Here Be Dragons: A Parent’s Guide to Rediscovering Purpose, Adventure, and the Unfathomable Joy of the Journey, a book about raising brave and service-minded children. His writing has appeared in The New York Times, The Atlantic, and the Yale Journal of International Law. Ken is running for Congress to represent Ohio’s 7 th District.