I’m about to suggest something that would’ve been unthinkable to me as an E-3: Put yourself in the admiral’s shoes. … Continued 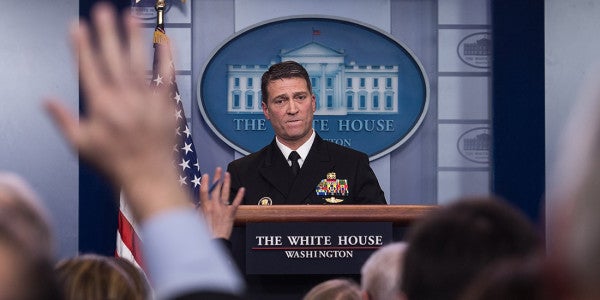 I’m about to suggest something that would’ve been unthinkable to me as an E-3: Put yourself in the admiral’s shoes.

You’re 23 years into a terrific career as a naval physician. For 12 of that, you’ve been the president’s doctor, administering checkups to three very different POTUSes — high-stakes business, sure, but you’ve been doing it longer than most service members do anything.

You’ve got a star on your shoulder, and you’ve just been selected to collect a second one… along with a nice bump to $14,268.30 in base monthly pay — which would also add a welcome boost to your already-rich retirement pension, whenever you feel like actually retiring. You’re a spry 50, so no need to worry about that just now.

But then a president asks you to do a daunting job you have no hard experience for: joining his Cabinet to run the Department of Veterans Affairs, the nation’s second-largest publicly funded institution. You’ll face a tough Senate confirmation. If confirmed, you’ll enter a snake’s nest of competing interests and ponderous bureaucracies, where your standing with the POTUS who hired you is in doubt from day to day.

Also, you’ll have to forgo that second star and retire from the only organization that’s employed you since med school. Like, now.

Such is the dilemma that Rear Adm. (lower half) Ronny Jackson, U.S. Navy, faces this week, as he prepares for Senate hearings about his nomination to run VA.

Jackson, a highly respected physician, first garnered headlines when he declared after President Donald Trump’s first physical that the portly POTUS “might live to be 200 years old… He has incredibly good genes, and it’s just the way God made him.” Whatever else may have transpired between Jackson and Trump since then, the boss evidently has the impression that Jackson’s got the right stuff to run 1,250 hospitals and clinics serving 9 million veterans across the U.S.

We should have such problems, you say: Take the extra star and the $171,000 admiral’s salary, or get out with an annual retirement of more than $50,000 to take a prestigious six-figure job working directly for the president of the United States?

Of course, there’s a lot more to it than money. Here are three reasons Jackson isn’t living the dream, so much as facing a nightmare:

His choice isn’t really a choice.

You’re an active duty military officer, and the president asked you point blank to do a thing that is neither illegal nor immoral. Could you really say no? Perhaps, but most officers wouldn’t, even if they hated the proposal. And though he’s all in, it’s not at all clear where Jackson really stands on his job offer; White House sources tell the Washington Post that the admiral “initially questioned whether, as a career Navy officer with limited managerial experience, he’s an optimal candidate to lead an agency of more than 360,000 employees.”

He’s being set up for failure.

Lately, Jackson’s been expressing enthusiasm about the job Trump offered him. “I’ve been able to rise to the level of an admiral, a flag officer in the Navy. I didn’t just stumble into that,” he told a hometown paper when asked what qualified him to run VA. “I think I’ve got what it takes.” That’s undoubtedly true! But far more politically savvy hospital administrators and CEO types — like David Shulkin and Robert McDonald — have been smashed by the daily grind of nervous veterans’ groups, rattled civil servants, and strident political lobbyists who cloy the VA secretary on a daily basis. The uniform provided Jackson a modicum of safety: Tell your truth and take your orders. (Not that it did Lt. Gen. H.R. McMaster any good.) Now you’re a civilian, and you going to have to bring bad news the president’s way — with a lot more at stake than another star.

He’s probably not gonna make it that far.

Nominating a sitting flag officer to run VA is largely unprecedented — Gen. Omar Bradley did it after World War II, until pro-privatization vets’ groups pushed him out in 1946 — and nominating a flag officer with a promotion pending before the Senate has caused a bunch of procedural problems that the Trump administration doesn’t seem to care about, leaving “lawmakers flummoxed about how to proceed,” one Senate aide suggested to the Washington Post. “There’s some question here whether [Jackson’s] flag officer nomination will move forward given his VA nomination. It’s all TBD, because he can’t serve in both positions concurrently, so it wouldn’t make sense for the Senate to move the nominations concurrently.” Senators are already expected to squeeze Jackson hard, on television, on his qualifications and preparations for a Cabinet post. The pending promotion just gives them another reason to question whether the VA post is the best use of Jackson’s talents — and whether the White House that tapped him has its crap together.

In the end, this grunt’s dream — which prestigious six-figure gig to take? — is a career officer’s nightmare: Jackson could avoid an iffy nomination and a thankless job while collecting a $25,000-a-year promotion… but that would require him to say “No, sir” to a president. So far, Jackson’s doing what you’d expect a career officer to do: trying to polish this turd. For his sake and the sake of vets all over America, here’s hoping that shit will keep a shine for a while.