The US Military Is Unprepared For The Future Of War. Here’s How To Repair And Rebuild It

At his 1993 Confirmation as Director of the CIA, James Woolsey observed that “we have slain a large [Soviet] dragon, but we … Continued 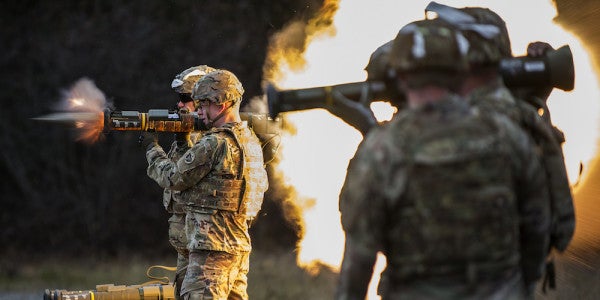 At his 1993 Confirmation as Director of the CIA, James Woolsey observed that “we have slain a large [Soviet] dragon, but we live now in a jungle with a bewildering variety of poisonous snakes.” His predictions have borne out across the three theaters most pivotal to America’s interests. A resurgent Russia, metastasizing terror threat, and rising Iranian influence sow discontent throughout Europe and the greater Middle East. Despite a much-touted “pivot” to Asia under the Obama administration, the regional-security situation is bleak. Notwithstanding skyrocketing tensions on the Korean Peninsula, China is reorganizing its military for aggressive actions and, in the last four years alone, has constructed more ships than exist in the entire French Navy.

By their very definition, global powers do not pivot: the United States cannot flit from region to region and expect to maintain the liberal international order which underpins our economic security. The next fifteen years will see this system, built through three titanic struggles over the course of the 20th century, thrive once again or start to wither. If the United States is to remain the steward of global democracy and free enterprise, then it must repair and rebuild its military forces which undergird its national power immediately, as a new AEI report argues.

To understand why, consider the inadequate state of the benchmark used to determine the Pentagon’s mix of forces—and ultimately, its budget. The United States entered the twenty-first century with a “two-war” force-planning tool, but this definition remained perennially vague. Simultaneous conflict in Iraq and Afghanistan exposed the limits of any such concept based on our inherent biases erroneously assuming that the United States gets to choose where and how the nation fights in advance. Even this flawed benchmark faded to something less than two major conflicts in the wake of the Budget Control Act, sequestration and the shuttering of hundreds of American bases abroad. This American withdrawal has coincided with a concurrent rise in global disorder, and the United States’ overzealous concentration on counterterrorism at the expense of preparing for a major military contingency exacerbates the threat posed by adversary states.

To cope, scholars at the American Enterprise Institute asserted that the United States must adopt a new “three-theater strategy.” The armed forces must generate the capacity to return forward in meaningful strength across Europe, Asia and the Middle East to adequately buttress American interests. Our emphasis on theaters, not wars, highlighted the plethora of uses for military forces outside of hostilities, from maintaining deterrence to conducting presence operations and providing humanitarian relief.

Too often since the turn of the century, the Pentagon has acted less like a Department of Defense and more like a Department of War in its force planning by ignoring military realities beyond immediate battlefield needs. To illustrate, consider the sorry state of American military modernization. Most of the military means the United States possess have hardly changed in the quarter-century since Woolsey’s confirmation in 1993. The Pentagon has vacillated between investments in immediate needs for the wars of today and high-risk gambles on disruptive technologies for the conflicts of the far future. From 9/11 to the imposition of sequestration, the services collectively spent $75 billion on modernization programs that fielded little to nothing and deferred a further $370 billion of planned modernization spending on new equipment. Coupled with the subsequent—and ruinous—Budget Control Act defense-spending caps, the result is a military that is both undermanned, outgunned and overcommitted, often fielding weapons older than the service members operating them.

Democratic and Republican lawmakers alike have acknowledged the dangers of the barbell status quo, and an overdue defense buildup is in the works thanks to strong leadership within Congress. Nevertheless, the lack of an official defense program in detail beyond President Obama’s last five-year outline introduces considerable uncertainty about the strategic direction of the Armed Forces. The dangers of the geopolitical situation demand immediate, dramatic and sustained efforts to support a force designed to deter and defeat adversaries across three sprawling regions—each with unique needs and service demands.

The plan outlined in Repair and Rebuild accomplishes this through tailored solutions designed to shore up a more balanced “capacity of capabilities” to operate in three places simultaneously while reversing the creep toward spending 2 percent of gross domestic product on defense.

Forty thousand additional Army troops would secure the eastern border of NATO, principally by supporting the reintroduction of three permanently deployed Armored Cavalry Regiments in theater. Based east of Germany, these forces would combine armored, artillery, cyber and air-defense assets to construct a robust force capable of serving as more than a tripwire. In addition to meeting Russian probing attempts with force if necessary, the varied composition and permanent forward basing of these forces would exponentially increase opportunities for exercises with Eastern European partners to further bolster their domestic military competency.

AEI’s recommendations would de-escalate tensions on the Korean Peninsula by dramatically reducing the credibility of North Korean first strike. Repair and Rebuild accomplish this by spending $17 billion above the last five-year defense program to make up for a decade of underfunding for Missile Defense Agency programs. By maintaining ground-based interceptor production at twelve units per year while sustaining upgrades to the program, outfitting fifteen additional destroyers with ballistic-missile defense technology, financing a new space-based sensor layer using demonstrated technologies, and expanding the Army’s Patriot force by 22 percent, the Pentagon would possess enough missile-defense resources to confidently defend against tactical and strategic missile threats.

Overall, the blueprint bolsters capacity through the procurement of an average of fourteen ships per year, which nearly doubles the rate of F-35 procurement, and increases active Army and Marine Corps end strength by sixty thousand. It restores readiness by offering the services chiefs a fund totaling $136 billion between fiscal years 2018 and 2022 for this explicit purpose. This plan supports the long-term vitality of the force by selectively accelerating research and experimentation through a variety of investments, from next-generation bombers to alternatives to GPS and restored space capabilities. And it immediately boosts funding for the neglected combat logistics and mobility forces so vital to maintaining America’s sustained presence abroad.

Of course, an investment strategy meant to hedge risk in three theaters and across three time horizons (the present, the immediate future, and the 2030s) will certainly not be cheap: AEI’s plan would increase base defense funding to $679 billion in 2018 and add a total of $533 billion above President Obama’s final spending plans through 2022. This is much less expensive, however, than the risks assumed if America’s global leadership is allowed to wane and the credibility of deterrence falters. In addition, this plan would rejuvenate American science and industry and contribute a relatively trivial sum to the national debt compared to that generated by ponderous entitlement spending, which is expected to comprise 85 percent of discretionary spending between 2018 and 2027. If Congress is to provide for the common defense—not just of the United States but the international system that generations of its citizens have sacrificed so much to build—then the time is at hand to both repair and rebuild America’s military.

Mackenzie Eaglen is a resident fellow at the AEI Marilyn Ware Center for Security Studies. She worked previously in the House, Senate, Office of the Secretary of Defense, and the Joint Staff.