Although much of America’s attention has focused on finding the causal factors behind Monday’s collision between the USS John S.... 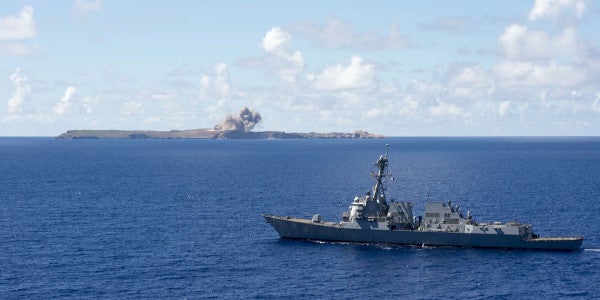 Although much of America’s attention has focused on finding the causal factors behind Monday’s collision between the USS John S. McCain (DDG-56) and a Liberian-flagged oil tanker off the coast of Singapore, we should not ignore the strategic impacts, either. They’re big and worrisome.

The U.S. 7th Fleet, stationed in Japan, possesses eight Arleigh Burke-class destroyers, including the McCain and the also-disabled USS Fitzgerald, assigned to Destroyer Squadron 15. This ship class is equipped the Aegis Ballistic Missile Defense system, which enables warships to intercept short to intermediate-range missiles — the type of missiles that an aggressor like North Korea might fire at U.S. ground bases in the Pacific. Indeed, when North Korea launched a test missile back in February, both the USS Stethem and the USS McCampbell — sister ships to McCain in DESRON 15 — were in the region.

Ships, including DDGs from DESRON 15, ported at U.S. Naval Base Guam to participate in the Multi-Sail 2016 exercise.Navy/Maj. Jeff Landis, USMC (Ret.)

The Aegis defense system works as part of a broader U.S. missile defense architecture comprised of space and land-based sensors. For example, destroyers can be positioned around the Korean peninsula to detect ballistic missile launches; those same ships can also be outfitted with SM-3 interceptors that are capable of destroying ballistic missiles during their midcourse phase of flight — that is, when they’re in space.

Ballistic missile defense is not as simple as positioning a couple of DDGs around a contested region, though. Although all eight of the ships in Destroyer Squadron 15 are equipped with the Aegis defense system, not every ship is always outfitted with interceptors. Because destroyers are intended for both offensive and defensive capabilities, deploying them strictly as ballistic counter-measures would limit the overall offensive abilities of their parent carrier strike groups.

Aren’t there other BMD-capable ships in the U.S. Navy? Overall, 33 destroyers and 5 cruisers—including one stationed in Japan—are BMD capable. However, shifting assets to cover gaps in BMD defense means the U.S. either loses forward-deployed BMD coverage elsewhere, such as Europe, or incurs the costs of sending additional vessels to sea.

Similar to ground-based infantry surges, the Navy can only temporarily support increased deployment tempos before resourcing and personnel burnout become issues. Moreover, peacetime naval expeditionary forces are designed to address a wide range of contingencies. The visible tools of U.S. foreign policy, ships must deter aggression, project power, and respond to a variety of crises. Although reassigning an individual destroyer the mission of BMD to cover gaps is not irrational, it is not without opportunity costs.

Even if the United States ate the cost of repositioning other ballistic missile defense destroyers, such a move might be interpreted as aggression by other navies. Since 2015, China’s navy has regularly dispatched military vessels to shadow U.S. warships accused of trespassing in Chinese territorial waters. Deterring and defending against a North Korean first strike would be compelling reasons to divert additional BMD destroyers into the 7th Fleet area of responsibility. But China could respond in a manner that furthers regional tension.

With both the McCain and Fitzgerald undergoing repairs, the 7th Fleet has lost a considerable portion of its available ballistic missile defense ships. Although the U.S. Army has other ground-based interception abilities in the region, comprehensive missile defense relies on overlapping layers of weapons platforms. As of current testing, SM-3 missiles have an 80% intercept rate.

The McCain and Fitzgerald will both eventually return to the sea, but their absence is a pertinent reminder of the second and third-order effects of crippling underway mishaps in an already delicate region of the Western Pacific.

Aaron Barruga is a former Special Forces noncommissioned officer with deployments to Iraq, Afghanistan, and the Pacific Theater of Operations. He is the Tactical Field Editor for Ballistic Magazine.