Bad things happen to veterans every day. But to hear some people, anything bad that happens to a veteran is... 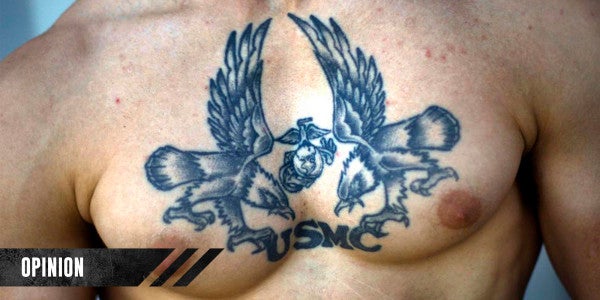 Bad things happen to veterans every day. But to hear some people, anything bad that happens to a veteran is extra super special bad.

Recently, this issue came into the news when the wife of a Marine veteran was deported. That’s a damn shame. Our national leadership should have passed comprehensive immigration reform years ago. No one should have to go through the ordeal of deportation after being here 20 years and building a family with an American citizen.

But the fact that her husband is a Marine veteran does not make a bit of difference as to how unjust this dilemma is or how sad it makes one feel. If this woman was married to a convenience store clerk, her family’s grief would be exactly the same.

“This shouldn’t happen to people who’ve served their country!”

How would that work, exactly? Should there be a different set of rules for veterans? Some kind of VIP lawbreaker punch card saying “Veteran: ten free passes, transferable to family members?” Is the government supposed to enforce immigration laws in a draconian manner unless you are married to a veteran, in which case it’s fine?

Under that system, would every veteran get this special dispensation, or just combat vets? Would you have to serve for a long time, or are you still a “hero” deserving of sweet deals if you got a general discharge a few months into your enlistment? If any vet rates it just for raising his or her right hand, why not police and firemen? Why not teachers? Why not that nice lady in your neighborhood who’s always been really helpful? She’s probably done at least as much for society as half the vetflakes wearing moto t-shirts saying “Veteran: someone who wrote a blank check made payable to the USA, for an amount up to and including their life.”

If you judge the degree of a tragedy based solely on who is experiencing it, you’re missing the point. Either some feature of our society is unjust, in which case we should do our best to prevent it from happening to anyone, or it’s not. In the case described, either you believe undocumented immigrants all need to be deported, regardless of family status, or you don’t.

This isn’t about veterans. It’s about whether the law is applied evenly. If you think veterans should get special dispensation, that’s fine, but aren’t there other categories of people who might also deserve help?

That’s not to discount the value of such innovations as veterans courts. Veterans have unique problems that should be addressed by those trained to deal with them. That’s not the same as saying that veterans should get a better or worse deal than other lawbreakers.

This attitude does not just apply to the legal system, but to other misfortunes as well. It’s often said that no veteran should be homeless. I totally agree — no one should be homeless. “But those other homeless people have made bad choices that made them homeless!” you might say. Sure, they probably did — and that homeless veteran probably made a few bad calls as well. Whether that homeless person is a veteran or not doesn’t really change much. If a couple bad decisions can put a person on the street, then perhaps we need to look at society generally–not just when it involves a vet.

Society has already decided to take the effects of military service into account by giving veterans certain benefits not given to others in similar circumstances. Whereas most people are only a paycheck or two away from landing on the street, a vet has a few more resources to tap into before hitting bottom. For example, most vets have a least the Post 9/11 GI Bill. If you can’t get a job, go to school, learn something that will get you a job, and get paid BAH while you do it.

If not the GI Bill, vets are afforded myriad federal, state, local, and private employment assistance services. If they’re service-disabled, as is often the case for those vets people are most concerned about, there are programs like the VA’s Vocational Rehabilitation and Employment services to fill in the gap. Then there are benefits from the standard Disability Compensation all the way to a veteran pension for older vets. If everything else fails, there are several housing vouchers and temporary assistance programs just for vets.

The military and the VA aren’t perfect, but you can’t say the country isn’t at least trying to give veterans their due. The 2019 budget request for the VA is $186.2 billion, and 2020's request will probably exceed $200 billion. While the VA still has problems, it has made progress since the 2014 scandal. For example, its medical care meets or exceeds the quality of comparable non-VA medical facilities.

If that isn’t enough, then what, exactly, would you propose instead? A free house and employment for life for every veteran? A lot of people would join for the wrong reasons if a life of leisure was the payoff on the back end. One can say meaningless things like “We shouldn’t spend money on when vets are still homeless,” but unless you have something more specific to offer than “Stop wasting money on stupid shit!” “The VA’s fucked up!” or “Veterans deserve everything we can give!” it’s just posturing and self-righteousness.

Yes, sometimes unfortunate vets fall through the cracks, and that’s a tragedy. Those cracks exist for everyone, vet and civilian alike. When you see something in the paper about how some horrible misfortune has befallen a vet, you should feel bad about it. But you should also feel bad if that same thing happened to a regular civilian. Most of them have lived good lives and had something go sideways, too, whether by their own actions, bad luck, or a combination thereof, just like vets. They’re all people, deserving of help and consideration — and, more importantly, the same metrics of empathy. Being a vet doesn’t make one uniquely righteous, just someone who potentially has a different set of problems.

The military and the VA can always do better jobs of making sure vets get off on the right foot. Making sure that veterans get access to all the resources they’re entitled to is tremendously important. But the idea that veterans should be immune from the misfortunes that routinely befall other citizens perpetuates the damaged vet narrative. That has hurt veterans’ well-being more than nearly anything the military or the VA has done wrong.

But veterans are citizens first. If you got the paycheck and benefits guaranteed when you signed your contract, then no one owes you anything more. If it’s wrong for something to happen to a vet, it’s wrong to happen to anyone. When looking at trying to fix a tragedy, we need to look at whether it’s due to being a vet or just being.