War and the military have long been favorite subjects for Hollywood movie producers. Well-done war movies can really capture the … Continued 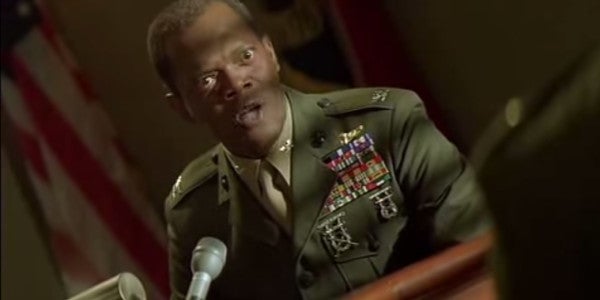 War and the military have long been favorite subjects for Hollywood movie producers. Well-done war movies can really capture the spirit and complexities of warfare and military service (think Saving Private Ryan).

But the military is complex and nuanced and there are a million tiny details. When movie producers — many of whom have no military background — attempt to capture that nuance, it often results in mistakes that are really obvious to people in the military.

The mistakes are so obvious and glaring, there’s even a popular myth that movie studios are required by law to get certain aspects of the uniform wrong in order to prevent people from accurately impersonating members of the military. Our friends at Ranger Up recently wrote a good piece dispelling that dumb theory.

Related: 10 movie quotes you always wanted to say in combat »

Regardless, vets and service members get frustrated when they go to see their livelihoods on the silver screen and the movie just gets it completely wrong. A recent discussion thread on RallyPoint even asked, “What ONE incorrectly depicted thing pisses you off most about military movies?”

RallyPoint is a great social networking platform for the military community. We’ve picked out some of the best answers to demonstrate what really grinds the gears of vets when movies screw it up.

1. Skylining. In war movies, it’s pretty common to have that dramatic long shot of soldiers silhouetted among the ridgeline, walking a patrol. This is a huge tactical faux-pas, as it would make the patrol very obvious to anyone merely looking at the skyline.

“Skyline” is even a military slang term for making something obvious. And (shameless plug) the name of Task & Purpose’s news aggregator, where we point out the top stories you need to know.

2. Radio chatter. Few things seem more quintessentially military than ending a communication over the radio with “over.” But real military radio etiquette is a matter of official protocol, not something you can fake.

I remember playing Army as a kid and doing it with my walkie talkies. Unfortunately, Hollywood does about as good of a job getting it right as I did when I ran around my neighborhood with a cap gun.

Perhaps the best example is “over and out,” a terrible conflation of two different real terms in voice procedure, and they’re mutually exclusive from one another.

3. Endless ammo and hand grenades that level buildings. One of the most enticing parts of seeing a war movie is the awesome action scenes. But for many combat veterans, it pains them to see an actor roll a fragmentation grenade into a house, only to see a fireball the size of a city block take out the building.

And firefights involving M4 carbines on full automatic that never run out of ammunition don’t help the cause. But hey, Michael Bay made a career out of that, right?

To be fair, this isn’t specific to war movies. Think of all the car chases have we seen end with the car hitting a dumpster, then explode into a blast of hellfire, and the dumpster explodes, too.

4. Getting the medals and uniform wrong. Dress uniforms are so precise and detailed that real service members occasionally get things wrong. What medals an actor wears in a movie makes little difference to the majority of the audience, but to the military and veterans community, it really sticks out.

Little details like tucking in your lapels on your Marine service alpha uniform, or huge things like wearing the wrong uniform for that respective branch, all together go a long way in distinguishing movies that seek to honor military service from those that are just cheap imitations of it (I’m looking at you, John Cena in The Marine).

The ability of movie studios to portray the uniform correctly is even legally protected, so if movie producers get it wrong, they have no excuse.

U.S. Code Title 10, Subtitle A, Part II, Chapter 45, S772 outlines proper wear and use of the U.S. military uniform. It reads: “While portraying a member of the Army, Navy, Air Force, or Marine Corps, an actor in a theatrical or motion-picture production may wear the uniform of that armed force if the portrayal does not tend to discredit that armed force.”

Check out the full discussion thread in RallyPoint here. What bothers you when you see it in movies? Let us know in the comments.