The miniseries adaptation of Joseph Heller's iconic 1961 novel reminds us what it felt like to take war personally. 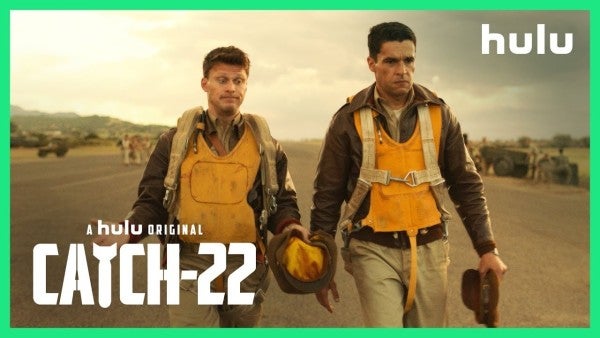 Catch-22 is not a heroic war story. But nearly six decades after Joseph Heller’s legendary 1961 novel was first published, it remains a poignant and timeless satire of wartime military service.

Catch-22 recently picked up a screen adaptation on Hulu in the form of a six-part miniseries directed by George Clooney, Ellen Kuras, and Grant Heslov, with each director overseeing two episodes. Ahead of the series premiere on May 17, Task & Purpose had a chance to screen Hulu’s Catch-22.

Watching the show, I was reminded of a specific passage from Heller’s original novel, which I read sometime in 2011 between my first and second deployment to Afghanistan. After a mission, the story’s unwilling protagonist, Capt. John Yossarian, a B-25 bombardier (played by Christopher Abbott in the show) tells his friend and part-time foil Clevinger (Pico Alexander) that the Germans they’re bombing are trying to kill him:

“They’re trying to kill me,” Yossarian told him calmly.

“No one’s trying to kill you,” Clevinger cried.

“Then why are they shooting at me?” Yossarian asked.

“They’re shooting at everyone,” Clevinger answered. “They’re trying to kill everyone.”

“And what difference does that make?”

When I read that I burst into a fit of nervous laughter and hoped nobody would ask what was so funny. In the U.S. military, putting one’s own self-interest before others is rarely acceptable, and for good reason: No one wants to serve alongside those who think of themselves before their brothers and sisters in arms.

But Yossarian, I realized, was on to something: trying to kill someone is personal, even in war — and you tend to take that shit personally if you’re on the receiving end.

Before I read that passage, I’d never seen that sentiment expressed openly. And while that scene didn’t make it into Hulu’s Catch-22 in its entirety, the show reminded me what it felt like to take war personally. This is probably the series’ greatest achievement in terms of how it portrays the wartime experience to a broad audience.

Well, that and its no-holds-barred mockery of the top brass.

For those who haven’t read the book or seen the 1970 film adaptation starring Alan Arkin, Catch-22 follows Yossarian during the height of World War II in Europe as he does everything in his power to avoid being a hero. But it’s not just the enemy that’s out to get Yossarian: it’s also his command, and in particular his commanding officer Col. Cathcart (Kyle Chandler), who repeatedly raises the required number of missions that have to be flown before the soldiers can rotate home. Every time Yossarian gets close, the number goes up.

And there’s the titular Catch-22. In the show, when Yossarian asks Doc Daneeka (played by director Heslov himself) to ground him for insanity, the good doctor explains that, “anybody who wants to get out of combat duty isn’t really crazy. Catch-22 specifies that a concern for one’s own safety in the face of danger, real and immediate, is the process of a rational mind.”

Yossarian can do nothing but marvel at this masterstroke of military bureaucracy: “That’s some catch, that Catch-22,” he says in the first episode.

Hulu’s miniseries goes out of its way to portray and then exaggerate the insanity and hypocrisy of war, and the little acts of rebellion that occur when soldiers believe their commanders are just as likely to get them killed as enemy flak or fighters. In one instance, the night before a dangerous daylight bombing raid on a German-held city, Yossarian sneaks into the command tent and moves a line of red string on a map up a few inches, signifying that everything below the marker now belongs to the Allies.

The next day, the camp is filled with joy. They no longer need to embark on the mission. Why? Overnight, Allied forces took control of the area they were going to bomb. How? Nobody asks. All they know is that a piece of string moved.

The series, like the book, has a rolling cast of characters, too few of whom survive the war, but each is a source of amusement, and often, disdain. Major Major (Lewis Pullman) is promoted to major because it’s simply easier than trying to remember that a man named Major Major isn’t actually a major; there’s Clevinger, whose heartfelt belief in the mission makes him blind to the madness all around him; and of course, we have Clooney as Scheisskopf, a general who believes that a column of soldiers marching neatly with crisp and clean uniforms is the key to winning the war.

The show, like the book, is satire, so it’s important to take all of its mockery and cynicism with a grain of salt. The characters on screen are caricatures of heroic archetypes, and we’re immediately immersed in their flaws, their naivety, insanity, cruelty, and fear.

But while Yossarian’s desperate attempts to get out of combat duty may seem cowardly, it’s hard to blame him for trying to stay out of harm’s way. After all, they — the enemy and his command — are trying to kill him. It’d be hard not to take that personally.