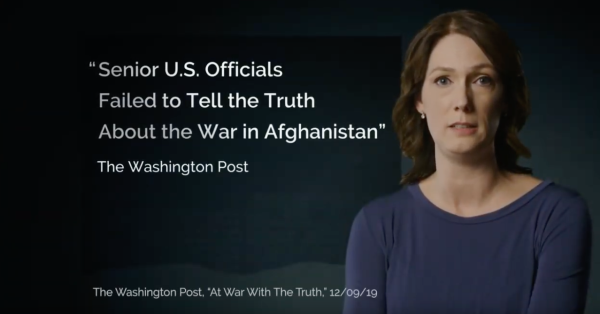 “When will it end?” asks Laura Hechel, a U.S. Army veteran. “Over 60% of veterans like me think it's time to get out of Afghanistan,” says Adam Miller, a Marine veteran.

Those two voices were among five unveiled Thursday in a 30-second television ad that will air in Michigan, Wisconsin, and Pennsylvania, urging voters to demand their lawmakers put an end to “endless wars.” As part of that effort, the first order of business for the sponsor of the ad, Concerned Veterans of America, is to get America out of Afghanistan.

“We would like to see a full withdrawal of U.S. forces from Afghanistan as soon as possible,” said Nate Anderson, an Army Green Beret and executive director of CVA, a conservative veterans' group.

“The reality for us is that leaving our forces there only puts them at further risk in a country where we don't have a strategic objective that we have not already met,” Anderson said, recalling the death of Osama bin Laden, punishing the Taliban for harboring al Qaeda, and largely uprooting the terror group from the country. “All those things happened,” he said.

And yet, 18 years, 3 months, and 9 days after Operation Enduring Freedom officially launched, the war continues to grind on, albeit under a different name. This past weekend, two American service members were killed and two others were wounded after their vehicle was struck by an improvised explosive device. Their deaths were the first in the new year.

In addition to the human cost — more than 2,400 American service members have died in Afghanistan, with tens of thousands more wounded — the U.S. government has spent roughly $2 trillion on the war, now the longest in American history. Meanwhile, secret documents published by The Washington Post in December showed top U.S. officials had repeatedly lied to the American public about the war in Afghanistan, which many believed was unwinnable.

“Candidate Trump campaigned heavily on the need to end our endless wars,” Anderson said. “I think his gut is right on this issue, but the establishment is pushing back hard. That's why we're taking action now.”

The issue is personal for Anderson, who served five years on active-duty with Army Special Forces, deploying twice to Afghanistan as a communications sergeant. The five other veterans in the ad, also CVA staffers, served in the Air Force, Army, and Marine Corps.

“When you're on the ground as an operator or an infantryman, you want to do your part in the mission. You want to demonstrate success in whatever mission that you are part of. We certainly did our best to do that,” said Anderson, but “it felt like we were running in place. … that's demoralizing.”

The Taliban and the United States have again started peace talks meant to end the war, though their outcome is far from certain. President Trump called off negotiations in September after a suicide attack killed an American soldier and 11 others, according to The New York Times. While CVA supports peace talks, Anderson said the group would prefer U.S. troops come home immediately, with or without a deal.

Still, critics say an immediate withdrawal could result in a Taliban takeover of the country, risking Afghanistan once again becoming a safe haven for terrorists. That is not a view shared by Anderson.

“I think the response to that is to consider the alternative. If we continue with the strategy of the status quo, then we need to decide as a society if the trillions of dollars we spent has been worth it. Or the loss of life, 2,400 troops killed in Afghanistan,” Anderson said. “Is continuing to pay that price gaining us anything in terms of security or American interests? That's what we ought to ask ourselves.”

You can watch the ad below: