Some of the allegations are spelled out in an email to a state lawmaker written by Maj. Elliot Potter, a Tampa-based officer in the Florida National Guard's Judge Advocate General Corps. 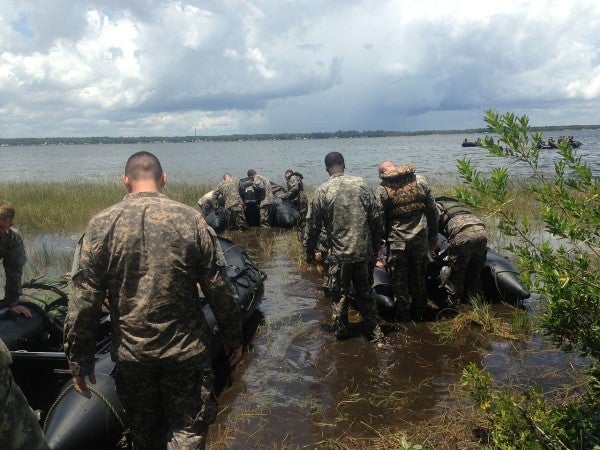 But the search comes while the guard — some 12,000 soldiers and airmen who deploy to combat zones and help at home in natural disasters — is facing ongoing investigations into allegations of sexual misconduct and coverups that date back a decade, the Tampa Bay Times has learned.

Among the allegations: that an officer joked he would hang a sign-up sheet outside the office of a female contractor so people could sign up for sexual favors from her in 15-minute increments.

Some of the allegations are spelled out in an email to a state lawmaker written by Maj. Elliot Potter, a Tampa-based officer in the Florida National Guard's Judge Advocate General Corps. Potter researched the allegations and forwarded them to his superiors. A copy of his email was obtained by the Times.

One man Potter accuses in a coverup is the guard's No. 2 in command, Brig. Gen. Mike Canzoneri, who is among a group of officers eligible to replace Calhoun.

According to Potter, Canzoneri and another officer “have actively concealed evidence of sexual misconduct and other violence committed against soldiers of the Florida National Guard.”

DeSantis, a former attorney with the Navy Judge Advocate General, said through a spokeswoman that he could not comment on an ongoing investigation. Canzoneri also declined to comment.

As of this week, DeSantis had not announced Calhoun's replacement.

Potter sent his email to state Sen. Lauren Book, a Broward County Democrat. Book told the governor in a Jan. 16 letter that she was “inclined to believe” Potter. Investigations are underway at both the state and federal level, said Book spokeswoman Claire VanSusteren.

In a statement to the Times earlier this month, Calhoun, the Florida National Guard leader, declined comment on specifics of any investigation, but said, “we are deeply troubled by these allegations.”

“We expect all of our members to demonstrate our values,” Calhoun said, “including honor, integrity and respect for self and others — and will continue to take necessary steps to ensure we are held to the highest standards so that we are worthy of the faith and trust the public places in us.”

Among the people whose complaints fueled the investigations is Shira Callahan, a 46-year-old former civilian contractor for the guard who has filed sworn statements with the guard's Inspector General's Office. Callahan alleges a pattern of sexual misconduct and other wrongdoing by guard soldiers and leaders.

She said in an October 2017 sworn statement that Canzoneri came up to her during a break in a 2011 conference and “slowly ran his hand from one side of my bare shoulder to the other.”

She also said Canzoneri made sexual gestures to a female bartender during the same conference and ended a two-year affair he had with a female soldier then transferred the soldier after she refused to have sex with his friends.

What's more, Callahan accused Canzoneri of covering up for another officer she named in her complaints — Lt. Col. Scott L. Taylor.

As a result of Callahan's allegations, Taylor was found to have “created an intimidating, hostile, or offensive work environment” for her, according to a September 2017 letter from Army Col. Leslie F. Caballero, inspector general with the Florida National Guard.

Caballero called it “conduct that brings discredit to the Florida National Guard.”

Those findings, signed off on by Calhoun, also included recommendations for changes in guard policies. They include ensuring that everyone considered for key positions is thoroughly screened and that personnel pass along information to commanders about “problem soldiers.”

Six months after Caballero's letter, on May 1, Taylor was named division chief at the Florida National Guard Joint Force Headquarters — the latest in a series of rank and job promotions despite complaints against him from Callahan and others.

In another of those complaints, former Sgt. Maj. Alan Rizzo — who acknowledged he and Taylor had a history of “bad blood” — said he was “extremely concerned about the close personal relationship between” Taylor and Canzoneri.

Callahan said she cannot understand Taylor's rise in the ranks.

She sees parallels between allegations against the Florida National Guard and the fear of coming forward expressed earlier this month by Arizona Sen. Martha McSally. A pioneering combat pilot, McSally told a Senate hearing that she never reported she was raped by a superior officer when she served in the Air Force because she didn't trust the system.

Said Callahan, “Had she reported her assault, I have no doubt she would have been re-victimized all over again. Leadership may say what is expected in broad strokes … but their day-to-day actions and attitudes demonstrate a reluctance to bring about real change towards a systemic problem.”

Taylor, in a phone interview, denied the allegations against him and said he does not have a close relationship with Canzoneri.

He said he has been targeted by a small group of former guard personnel whom he had disciplined. They're out to ruin his reputation through the military's complaints process, he said, filing more than 200 complaints against him.

“These individuals,” Taylor said, “have weaponized the process.”

He said he has statements from 10 witnesses rebutting the allegations against him but did not provide the statements. He later stopped returning messages from the Times.

It was in his role as a judge advocate general attorney that Potter received complaints against Canzoneri.

He undertook a review and later learned that it overlapped with allegations against Taylor. The allegations come from people who all are friends, Callahan said. They include her, two former Florida Army National Guard soldiers, and the wife of one of the soldiers.

Callahan described the incident involving the sexual sign-up sheet during a recorded interview in June with Army Lt. Col. Adam Calderon. Calderon had been directed by Maj. Gen. Calhoun to investigate Taylor.

As Taylor stood outside Callahan's office one day, she said, he told a group of soldiers that he planned to post the sheet on her door “with 15-minute increments so that the entire battalion” could get sexual favors from her.

“But it came with the caveat that he couldn't just stop it there,” she said during the interview, “that the number one spot was reserved for him …”

She told Calderon about her communications with Potter regarding Potter's research into Canzoneri, saying the lawyer “was not interested in anything having to deal with Taylor at first until he realized that you could not have one issue without the other.”

Potter, she said, submitted the results of his review “up the chain” to the Defense Department's Office of Inspector General.

“I believe her to be truthful,” Finch said. “She has no reason to lie, she has nothing to gain. I have a lot of respect for her and her courage.”

Callahan's first request for action was to the guard's inspector general, filed in March 2015. She said Taylor sexually harassed her in June 2011, and she reported incidents alleged to have involved Taylor with other people, among them: reports from two female soldiers that Taylor solicited sex from them via email in August 2012; sexual harassment of a male soldier in a shower in September 2012; and a physical assault against a female Army non-commissioned officer.

Callahan said in an interview that the complaints about email solicitations came to her in role as family support assistant to the guard. The male soldier filed a separate action request over the shower incident. The non-commissioned officer denied in an interview with the Times that Taylor assaulted her, saying they were just horsing around.

The status of investigations into the Florida National Guard has been unclear during the first months of 2019.

On Feb. 7, the state Department of Military Affairs told Sen. Book that a three-week review had turned up no evidence of wrongdoing by Canzoneri or by a second officer accused of a coverup — Maj. Terrence Gorman. Gorman is the department's deputy general counsel. The department provides management oversight of the guard.

She reiterated her earlier complaints that Taylor had sexually harassed her and “generally harassed” others in her unit — and added that Gorman had advised her not to record or report the harassment “as it would 'blackball' me (Callahan) within the battalion.”

Asked by Potter if she believed Gorman was attempting to “protect the alleged perpetrator,” Callahan answered, “Yes. Absolutely.”

Meantime, unsatisfied with the response from the Department of Military Affairs, Book asked how the department had reached its conclusions clearing Canzoneri and Gorman. The answer she received: An investigation is still ongoing.