Titan of tanks: Why Lima, Ohio is ground zero in the battle over defense spending

In 2019, the JSMC is widely known as the last remaining tank manufacturer in the country. It's the only facility that has produced the M1 Abrams, the Army's main battle tank since it debuted in 1980. 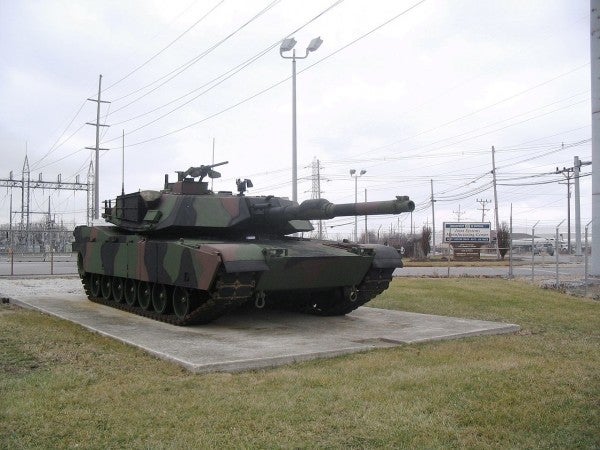 LIMA, Ohio — David Berger was sworn in as mayor of this one-time industrial boomtown on Dec. 5, 1989. A month later, he was hit with his first dose of bureaucratic reality.

It had been decades since businesses and people in Lima were coming instead of going. But in January, 1990, then-Defense Secretary Dick Cheney upped the ante. He revealed during a visit here plans to close the Lima Army Tank Plant, news that set Mr. Berger into action and foreshadowed much of what would happen with the plant over the next three decades.

Since it opened in 1941, the plant's work force has risen and fallen with the tides of defense spending and the military's needs overseas. Mr. Berger's first brush with the Pentagon led to his earliest battles to secure the city's manufacturing base. The wars have never stopped coming.

“It's been defensive, no question,” Mr. Berger, 64, said last week from his office overlooking the slow revitalization of Lima's downtown. Across the street, an historic former bank is being converted into apartments — the kind of development that signals bigger and better changes on the horizon.

One of the changes has been a push under President Trump to boost defense spending, which directly impacts Lima's military crown jewel, putting it on less precarious footing after the city braced for yet another closure less than 10 years ago. Mr. Trump's 2020 defense spending request includes more than $2.3 billion to produce 317 military vehicles and speed up production in Lima, the largest city in a county that overwhelming supported the President in 2016.

The White House announced plans for Mr. Trump to visit the plant on Wednesday, using the nation's last tank-making facility as the backdrop for his pitch to increase defense spending by 5 percent — a proposal certain to encounter pushback in the Democrat-controlled House.

Mr. Trump will tour the plant and deliver remarks in the afternoon before heading to a private fund-raiser in Canton.

Behind Mr. Berger, now Lima's longest-serving mayor, hangs a poster declaring the city's vision statement: “We must make the City of Lima THE place to live and work in Northwest Ohio. Every decision, every effort, every attitude determines Lima's future.”

Much of what Mr. Berger — one of the few elected Democrats in a red county — has done in office has been focused on the future and trying to prevent what is often unpreventable.

“We spend a lot of time defending our manufacturing base, so I have a lot of sympathy for what's going on in Lordstown right now,” said Mr. Berger, who won't be at the plant for the President's tour, citing a previously set meeting. The last president to visit was George W. Bush in 2003.

“We went through decades of those kinds of closures and if nothing replaces it, they'll be devastated for a long time. It's not something you easily absorb,” he said.

A set of crises

While the tank plant has never closed, production was drastically scaled back in the 1990s and again beginning in the mid-2000s. Those fluctuations have had a ripple effect on the community. During Mr. Berger's first term in office, two other defense-related factories closed, costing the city 8,800 jobs and nearly $300 million annually, he said.

In recent years, Lima's economy has rebounded from rock bottom — though with 37,000 residents, it has shed a third of its population since 1970.

“As we're looking at our industrial base, we've re-emerged from a set of crises around all of these facilities, and we're now in the position where we've truly got the strongest economy we've had in manufacturing in over 40 years,” Mr. Berger said, citing the Ford Motor Co. Engine Plant, Husky Lima Refinery, and Proctor & Gamble as some of its major employers.

He also points to hundreds of jobs with good pay and benefits within 10 miles of Lima listed on the state's job board, OhioMeansJobs.

At the center of the area's hiring blitz is the tank plant, renamed the Joint Systems Manufacturing Center in the early 2000s to project versatility ahead of the Pentagon's 2005 round of Base Realignment and Closure (the process by which the U.S. Department of Defense evaluates which military installations should stay open).

“Renaming the facility became one of the strategies for dealing with the BRAC,” said Mr. Berger, who around that time founded Task Force Lima, a group of community leaders dedicated to supporting the plant. “You had to prove jointness. You had to prove that a facility served multiple services — so we decided we had to put it in the name. 'Joint Systems' was an attempt to highlight that it's not just a tank plant. They make multiple vehicles and multiple components.”

In 2019, the JSMC is widely known as the last remaining tank manufacturer in the country. It's the only facility that has produced the M1 Abrams, the Army's main battle tank since it debuted in 1980.

“Every Abrams tank in Army inventory started its life in Lima, Ohio. No exceptions,” said the plant director's Hank Kennedy.

In addition to the Abrams, the JSMC — a facility owed by the Pentagon and operated by Michigan-based government contractor General Dynamics — makes the Stryker armored transportation vehicle and the Namer, a vehicle for the Israeli army that accounts for 20 percent of the plant's output.

While components of the Stryker and Namer are built from scratch in Lima, a brand new Abrams tank hasn't rolled off the line since 1996. Instead, mothballed Abrams are delivered from defense storage, stripped down, and refashioned in the latest configuration. Right now that's the 70-ton Abrams M1A2 SEPv3.

In Washington, critics have argued the Abrams isn't what's needed for modern warfare. They say the tanks have gotten too heavy and haven't added new features to justify the cost of continuously restoring battle-worn vehicles that arrive in Lima as corroded steel hulls.

“We're going to spend several million dollars upgrading a tank without adding really any new capability,” said Dan Grazier, a defense researcher with the Project on Government Oversight and a former Marine Corps tank officer. “It's still going to do exactly what the Abrams has done since its inception, it's just getting more expensive. It's still going to shoot the exact same distance.”

'It goes up and down'

To bring the Abrams and other vehicles to life, General Dynamics employs some 600 workers and has set a target for another 350, which would bring employment to its highest level in nearly a decade. Welders, engineers, and machine operators are all in demand.

“I've been here when there were 3,804 employees and when we had 281,” said George Jeffries, a 63-year-old quality engineer from Celina. Like others of his generation at the plant, he recites with precision how long he's worked there — 36 years and seven months. He's staring down a retirement that begins in a few years.

“It has to be a good job or else I wouldn't have stayed here. It allowed me to put three kids through college, eat, and live indoors,” Mr. Jeffries said.

“The defense industry does have swings,” he added. “It goes up and down. It's a good thing for the city that the local mayor has lobbied to keep us open during the slow times.”

Greg Geboyls of Maumee, a retired troubleshooter who leads the foundation overseeing the plant's Veterans Freedom Flag Monument, said vets and people on the front lines of battle are always at the forefront of the job. Some 30 percent of JSMC workers are veterans.

“What we do for the country is the bottom line,” the 69-year-old said. “We've had Gulf War soldiers come right down the assembly line to shake our hands.”

Putting together a battle tank is no small feat. It takes five months to produce a single Abrams. The plant currently completes eight of them a month. A few years ago, only one was coming off the line just to keep it warm. With the hiring of hundreds more workers, General Dynamics expects to get up to 34 a month.

Those who have lobbied to keep the JSMC operation during funding lows argue that closing it would cost more down the road when the government inevitably needs to restart production on the latest Abrams model.

“Once you lose a knowledge base you can try to re-create it, but it's going to be expensive and a trial to get there,” said Brian Hahn, a plant official with the Defense Contract Management Agency.

Even Mr. Grazier with the Project on Government Oversight agrees: “This isn't World War II where we were able to retool auto manufacturers to build the military vehicles that we needed. It doesn't quite work like that anymore. We do need specialized facilities like the tank plant there in Ohio to be able to do these kinds of things.”

Mr. Berger's primary tactic for the JSMC has been mobilization. He started Task Force Lima to unite local stakeholders. He's lobbied state and federal lawmakers. Rather than go to Washington, he invites people to Lima so they can see the plant for themselves.

Recently, he's been encouraged by Republican Gov. Mike DeWine, who appointed a cabinet member for military affairs and is considering reopening a state office in Washington.

“For the most part, it fell on deaf ears in the [John] Kasich administration,” Mr. Berger said.

Republican Rob Portman was serving his first term in the Senate when U.S. Army officials explicitly told Congress they didn't want anymore of the current Abrams model, and would rather the money be used on research and development until the 2017 roll-out of the SEPv3. Lawmakers from both parties still secured millions to keep the Abrams line running.

“I got some heat during that time,” Mr. Portman said, “from the government waste groups and so on. There was national media criticism. But I stuck to my guns and I'm really glad that I did … If we had done what they wanted, we would be spending so much to get back on our feet.”

Even though it doesn't top the list of the city's biggest employers, the JSMC put Lima on the map and created its mythology as the nation's tank-making capital.

“Who would ever think that a weapons system that is world renowned would be built in a small Midwestern community in northwest Ohio?” Mr. Berger asked.