Marine Corps Fitness Tests Are Getting A Lot Harder. Here’s What You Need To Know

Editor’s Note: This article by Gina Harkins originally appeared on Military.com, the premier source of information for the military and veteran community. Marines will face … Continued 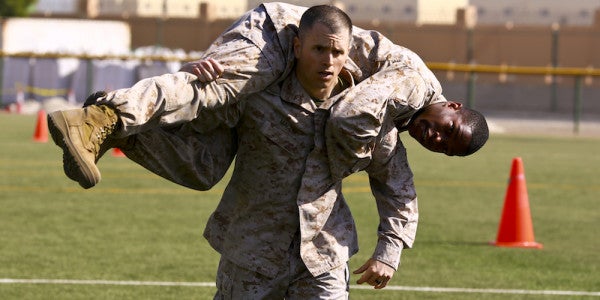 Marines will face several new standards next year that will make it harder to pass their physical and combat fitness tests.

The effort is meant to up the standards for all Marines, who will be pushed to strive for higher scores and better athleticism across the board, said Col. Stephen Armes, director of the Marine Corps' Force Fitness Division.

“I think, as with any program, you have to modify it and adapt it,” Armes told Military.com. “If you continue doing the same thing year in and year out, you're not going to get any better.”

The changes are based on data from the last two seasons of fitness test results as well as a push from Commandant Gen. Robert Neller to ensure all fitness requirements are “reasonable, fair and challenging,” Armes said.

*Getting ready for your PFT/CFT? T&P readers can get an exclusive additional 10% off Bodybuilding.com's signature stacks here. Use code TASKPURPOSE10*

Details on the upcoming changes were released Monday in aservice-wide administrative message. Here's a look at what's on tap for every Marine.

Starting Jan. 1, almost all female Marines will have to perform at least three pull-ups on their PFT.

Two years after the end of the flexed-arm hang, more women are opting to do pull-ups on their PFT, Armes said. But the number of reps of the upper-body strength exercise they must perform to pass the event is about to increase.

Female Marines ages 26 to 30 are going to see the toughest increase, with the minimum required jumping from one to four. Most women in the Marine Corps — those ages 21 to 25; 31 to 35; and 36 to 40 — will need to increase the minimum number of pull-ups from one to three.

Any female Marine age 41 or above will need two pull-ups to pass the minimum standard. The only female Marines whose standards won't change are the youngest — aged 17 to 20.

“You grow, from a muscular perspective, into your 20s,” he said. “A 25-year-old will be stronger than when you're 17. They have more time to develop, especially in a structured program like the Marine Corps.”

Most female Marines will also need to perform more pull-ups to earn maximum points on that event of the PFT. In the past, women needed between three and 10 pull-ups to max out, depending on age. Now that will jump from four to 12 pull-ups.

About 30 percent of female Marines opted for pushups in place of pull-ups on their 2018 PFTs, but that number is on the decline from 35 percent in 2017. More than 1,000 female Marines also cranked out 20 pull-ups when taking their PFTs this year, Armes said, which is on par with the number some men need to earn full marks.

“Once we did away with the flexed-arm hang and introduced pull-ups for the females, they're just showing that they're getting stronger overall … and they're quickly closing that gap,” he said.

Marines taking the CFT will no longer get a five-minute reprieve between their movement-to-contact, ammunition-can lifts and maneuver-under-fire events.

Effective July 1, Marines will have only three minutes to recover between those events while taking the CFT.

“Going back to the commandant's desire to make something reasonable, fair and challenging, five minutes is a long time, and he thought by making it three minutes was definitely going to make it more challenging for the Marines,” Armes said. “That's ultimately his aim, is to continue to challenge the Marines and continue to raise that bar for what they're trying to shoot for.”

That change — along with the other PFT and CFT changes Marines will see next year — is likely to cause a dip in scores on both fitness tests, he added. But over time, Marines adapt, and they've consistently shown that they rise to meet new physical standards, Armes said.

Since the CFT is meant to ensure Marines are ready for combat, a shorter recovery time is something they could experience downrange too.

“In combat, things happen rapidly,” Armes said. “You don't get a set time to recover. You might get a Marine across the danger zone and then they might have to do something like lift ammo cans. They're going to be doing one thing after another in combat.”

No Marine is going to be able to do the bare minimum on all six PFT and CFT events and expect to pass the tests anymore.

Starting Jan. 1, Marines will need a minimum combined score of 150 points to pass the PFT. Similarly, they'll need 150 points on the CFT to pass that test starting July 1.

“Ideally, Marines will look at the maximums across all events and they'll go after ,” Armes said. “If they go after the maximums, they're not going to have any problems.”

Currently, less than 1 percent of Marines taking the PFT across all age groups score less than a 150, he said. For the CFT, it's even lower. “But the big takeaway is that they cannot score a minimum on all three events and pass.”

The timing for all of these changes is right, Armes said. It's been about two years since the last PFT/CFT overhauls, and the Marine Corps now has force fitness instructors developing tailored PT plans for units and squadrons across the service.

No Marine should be training just to pass the PFT or CFT, he said, but to improve their overall fitness and nutrition so they perform as best they can on and off the battlefield.

“Like with any athlete, you continue to put the body through more calculated stress, and those stressors — if given the proper recovery — will make the athlete stronger,” he said. “This is one way to get after that.

“Marines now know that they're going to have to push themselves harder,” he added.