Taking a vacation on the cheap is tough, no matter who you are, but for military personnel often stuck planning … Continued 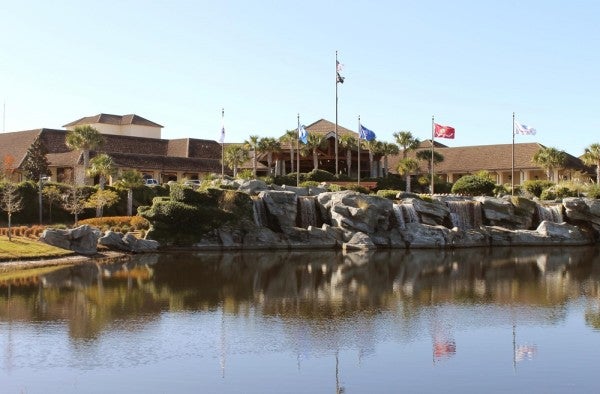 Taking a vacation on the cheap is tough, no matter who you are, but for military personnel often stuck planning a trip at the last minute (because leave dates weren’t released until two weeks before, naturally) it can break the bank.

Fortunately, there’s at least one place where troops and their families can lounge in style without blowing all their hard-earned cash — and it helps that it’s located at “the happiest place on earth.”

Shades of Green, is a sprawling resort at Walt Disney World in Orlando, Florida owned by the Department of Defense. Named for the rolling greens surrounding the the campus, Shades of Green features lodge-style clubhouses, heated pools, restaurants, water slides, a sports bar, a video arcade, a fitness facility, and two PGA championship golf courses — all built to facilitate some decent R&R; within the military community, reports Stars and Stripes.

“Disney is a place where dreams come true,” Shades of Green manager Edward Fagan told Stars and Stripes. “It’s the number-one family tourist destination in the world. In its midst we have a beautiful resort. Every member of the military owns this resort. This is something that is provided by the U.S. military as a thank you for your service.”

But what sets it apart from other resorts is that it’s designed with the goal of giving military families a place to relax and rest without going broke. In recent years the cost of a one-day adult ticket for Walt Disney World has skyrocketed 51% to $107 per person, according to the Los Angeles Times,not including additional cost of meals, housing, and transportation fees, which could easily add up to a several hundred dollars a day per person.

Meanwhile, Shades of Green charges $109 for a standard room for E-1s to E-6s and cadets, parking for $7 a day, and free transportation to the parks. It even has an AAFES exchange so you can snag some tax-free snacks and drinks while you’re there.

The resort has always had strong ties with the military. It was founded in 1994 when the Army’s Morale, Welfare and Recreation department leased the golf resort from Disney, making it the only armed forces recreation center in the United States.

For those heading back to the states after a long stint out at sea, or operations abroad — or if you just want to get away from your platoon sergeant for a few days — there’s hope for a relaxing getaway in a community you know and love. Just don’t expect it to be a complete escape from high-and-tights and lifers; after all, it is a private military resort, and nothing will ruin a day in paradise faster than getting “devil-dogged” or hearing the words “hey there, warfighter” because you decided not to shave. It might be a good idea to limit the war stories too — they’re a lot less impressive when everyone within earshot also has one.