'The Last Full Measure' ​is as much a story of battlefield bravery, as it is one of bureaucratic bullshit, and red tape. 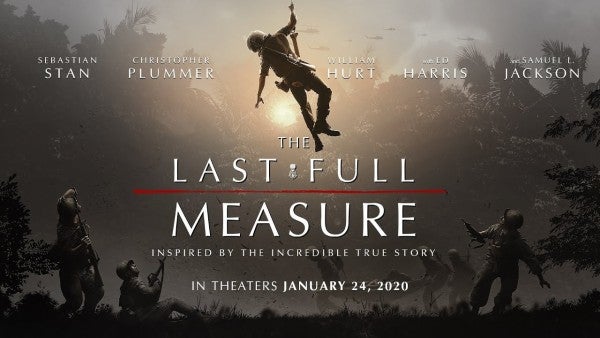 Todd Robinson’s upcoming Vietnam War drama, The Last Full Measure, is a story of two battles: One takes place during an ambush in the jungles of Vietnam in 1966, while the other unfolds more than three decades later as the survivors fight to see one pararescueman’s valor posthumously recognized.

On April 11, 1966, Airman 1st Class William H. Pitsenbarger (played by Jeremy Irvine) responded to a call to evacuate casualties belonging to a company with the Army’s 1st Infantry Division near Cam My during a deadly ambush, the result of a search and destroy mission dubbed Operation Abilene.

In the ensuing battle, the unit suffered more than 80 percent casualties as their perimeter was breached. Despite the dangers on the ground, Pitsenbarger refused to leave the soldiers trapped in the jungle and waved off the medevac chopper, choosing to fight, and ultimately die, alongside men he’d never met before that day.

Decades later, those men fought to see Pitsenbarger’s Air Force Cross upgraded to the Medal of Honor. On Dec. 8, 2000, they won, when Pitsenbarger was posthumously awarded the nation’s highest decoration for valor.

The Last Full Measure painstakingly chronicles that long desperate struggle, and the details of the battle are told in flashbacks by the soldiers who survived the ambush, played by a star-studded cast that includes Samuel L. Jackson, Ed Harris, and William Hurt.

After Operation Abilene, some of the men involved moved on with their lives, or tried to, and the film touches on the many ways they struggled with their grief, trauma, and in the case of some, feelings of guilt. For the characters in The Last Full Measure, seeing Pitsenbarger awarded the Medal of Honor might be the one decent thing they pull out of that war, remarks Jackson’s character, Lt. Billy Takoda, one of the soldier’s whose life Pitsenbarger saved.

At the start, Huffman — the person who ultimately becomes Pitsenbarger’s champion in Washington — wants nothing to do with the airman’s story, the medal, or the Vietnam veterans who want to see his sacrifice recognized. For Huffman, it’s a burdensome assignment, just one more box to check before he can move on to brighter and better career prospects. Not surprising then that Pentagon bureaucrats and Washington political operators are regarded with skepticism throughout the movie.

When Takoda first meets Huffman, the Army vet grills the overdressed and out-of-his-depth government flack about his intentions, calls him an FNG (fucking new guy) and tosses Huffman’s recorder into the nearby river where he’s fishing with his grandkids.

In one of the movie’s later moments, The Last Full Measure offers an explanation for why Pitsenbarger’s award languished for so long. The theory? Pitsenbarger’s Medal of Honor citation was downgraded to a service cross, not because his actions didn’t meet the standard associated with the nation’s highest award for valor, but because his rank didn’t.

“The conjecture among the Mud Soldiers and Bien Hoa Eagles is that Pitsenbarger was passed over because he was enlisted,” Robinson, who wrote and directed The Last Full Measure, told Task & Purpose.

“As for the events in the film, Pitsenbarger’s upgrade was clearly ignored for decades and items had been lost — whether that was deliberate is up for discussion but we feel we captured the spirit of the issues at hand either way,” he said. “Some of these questions are simply impossible to answer with 100% certainty as no one really knows.”

The cynicism in The Last Full Measure is overt, but to be entirely honest, it feels warranted. While watching the film, I couldn’t help but think back to recent stories of battlefield bravery, like that of Army Sgt. 1st Class Alwyn Cashe, who ran into a burning Bradley three times in Iraq to pull out his wounded men — a feat of heroism that cost him his life, and inspired an ongoing campaign to see Cashe awarded the Medal of Honor.

There’s no shortage of op-eds by current and former service members who see the military’s awards process as slow and cumbersome at best, and biased or broken at worst, and it’s refreshing to see that criticism reflected in a major war movie. And sure, like plenty of military dramas, The Last Full Measure has some sappy moments, but on the whole, it’s a damn good film.