Acting Defense Secretary Pat Shanahan showed up to Afghanistan on Monday wearing an outfit befitting the most evil of Bond villains. 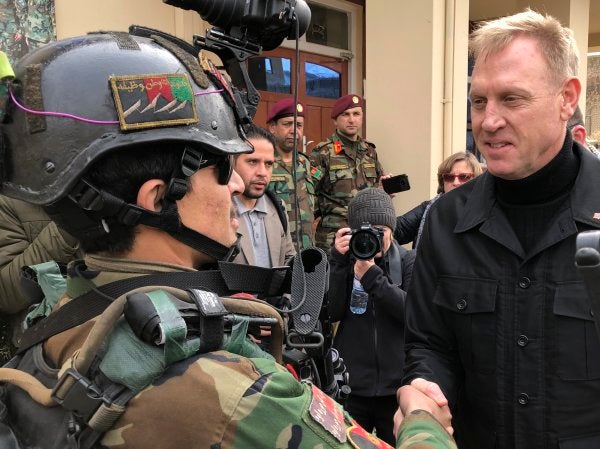 Acting Defense Secretary Pat Shanahan showed up to Afghanistan on Monday wearing an outfit befitting the most evil of Bond villains.

Here’s how the Task & Purpose team reacted to this amazing outfit:

jared [9:21 AM] Shanahan Arrives In Afghanistan Ready For A Cocktail Party

jared [9:22 AM] he looks like alec baldwin in the hunt for red october

Shanahan’s Afghanistan outfit: better than Kushner’s body armor, but not by much

jameswhuclark [9:22 AM] Shanahan has a plan to defeat ISIS/Taliban and it involves sharks with frigg’n lazer beams (edited)

Paul Szoldra [9:23 AM] The acting Defense Secretary just showed up to Afghanistan dressed like Dr. Evil

Officially, Shanahan is “meeting with President Ashraf Ghani to discuss a broad range of defense issues” and mingling with coalition troops still fighting in the 17-year-old war, according to a Pentagon statement.

But unofficially, he could be preparing to knock off Dr. Evil or his favorite henchman, Number 2, for worldwide domination, or he may even be preparing to conduct his own all-black-ops alongside Gen. Austin Miller, who, it should be noted, is a
former member of Delta Force.

Still, given the dark ensemble, our one hope is that Shanahan will at a minimum entertain the troops with a rendition of a
Johnny Cash classic.

There’s also a good detention facility at Bagram he can rock, in case he wants to take the
Folsom Prison route.

I rest my case.