The reflective belt: an icon of the Global War On Terror

How can such a small thing bring about so much anger? 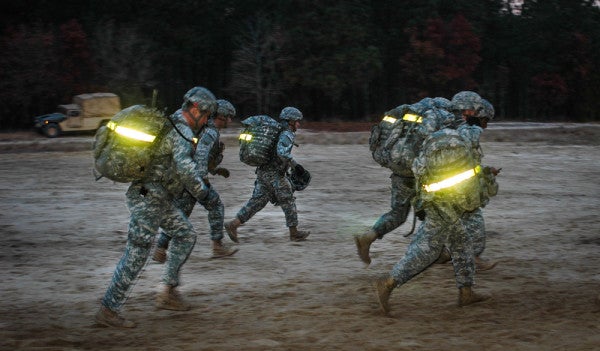 Past conflicts have had iconic symbols associated with them. For World War II, it is the flag raising on Iwo Jima. Vietnam has the UH-1 Huey helicopter. When people ask me what will be the symbol for the Global War on Terrorism, I reply with an obvious option: the reflective belt. From Balad, Iraq, to Bagram, Afghanistan, the reflective belt has shone the way for forces of freedom, justice, and the American way. It is not an overstatement to say that it is the most hated item in the entire U.S. military’s inventory. Why then is it always present? And how can such a small thing bring so much anger?

Like most things, the reflective belt was borne out of an actual need. Sometime in the 1990s, leaders realized that troops liked to conduct physical training in off-duty hours. Since most of these times fell before dawn or after dusk, troops would be running in the darkness, often on busy roads. In order to prevent many of the accidents that were occurring on bases, someone (no one knows who) ordered that troops wear thin belts of reflective material so motorists could see them. This common-sense approach started it all. Military bases across the nation started requiring troops to wear reflective belts. After all, they were light, could be stored in a pocket, and were not as cumbersome as a vest. The “Belt, High Visibility,” as it is called in the Army, became a part of life.

Soldiers with the 4th Brigade Combat Team “Currahee”, 101st Airborne Division (Air Assault), participating in the Soldier, NCO of the quarter and Audie Murphy board, begin the run portion of the Army Physical Fitness Test, at forward operating base Salerno, Afghanistan, July 14, 2013.U.S. Army photo by Sgt. Justin A. Moeller

As much as anything can go viral, the reflective belt went viral, not unlike a disease. Each branch of service came out with their own specific belt. Different colors began to appear besides the normal fluorescent yellow: pink, blue, and green. Its rise coincided with the Global War on Terror, and as advancing American troops swarmed into Iraq and Afghanistan, they brought the reflective belt with them. First only used at night on large operating bases for safety, reflective belts were rarely seen in war zones from 2001–2004. Then, around 2005, something broke down. That something was common sense.

Reflective belts began to be required everywhere in Iraq and Afghanistan. During physical training, walking anywhere at night, when operating all terrain vehicles, or even to get into the chow hall. Granted, this was restricted to major forward operating bases rather than small outposts whose residents still realized that a shiny object made little tactical sense. Because it was a uniform item, reflective belts became the purview of the senior enlisted soldier, the first sergeant. As the sergeant major protects his grass, so the first sergeant would bawl you out for not wearing a reflective belt. It quickly became a thing of mockery and derision by troops.

Still, the required wear of the reflective belt continued, almost as though some evil genie was controlling the process. The evil genie’s proteges were what we in the Army call “good idea fairies.” They did not disappoint. Some bases put out color-coded requirements for the wear of the reflective belt; not only would reflective belts be worn, but they would be color coded to match the individual’s rank. During the height of the Global War on Terror, reflective-belt use hit its nadir. It became required wear for entrance into a dining facility, even though dining facilities were well lit and significantly free of vehicles. Each branch of service adopted its own specific colors for reflective belts, adding to the bureaucratic mess that the Global War on Terror was rapidly devolving into. Some units even decided that colors wouldn’t cut it: they needed their troops to wear their rank and their unit crest on their reflective belts. It was truly a breathtaking time in military history.

While the years of 2003–2014 were the pinnacle for the reflective belt, its downfall coincided with that of the Global War on Terror. The Air Force crossed over into common sense in 2014 and launched the demise of the belt across the military. The Marine Corps base in Quantico, Virginia, recently dropped the requirement for wear of the reflective belt during midday physical activity, a striking achievement. Only in the Army does the regime of the reflective belt hold strong, the symbol of safety and risk aversion. The belt is so hated that it is routinely the target for the satiric barbs cast by Doctrine Man! and The Duffel Blog.

Although the mysterious power of the reflective belt has greatly weakened, its memory still lives on, from a display in an Air Force Museum to the collective memory of hundreds of thousands of veterans. Where the poncho liner is universally loved, the reflective belt is scorned and hated. It is a symbol of decisions by committee and the larger risk aversion that seemed to take hold during the Global War on Terror. The reflective belt is so strong in the American military’s psyche that the conflicts in Iraq and Afghanistan may as well be referred to as “The Reflective Belt Wars.”

As it stands today, the U.S. is still involved in conflicts throughout the Middle East. It’s a dangerous world. Don’t forget your reflective belt.