The Youngest And Oldest Living Marine Medal Of Honor Recipients Met, And This Epic Photo Is The Result

The Medal of Honor Convention is currently taking place in Annapolis, Md., and it has brought together the youngest and … Continued 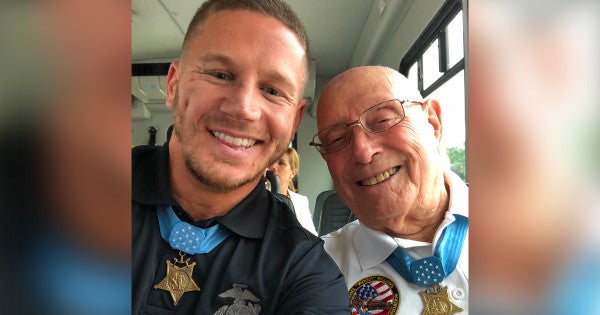 The Medal of Honor Convention is currently taking place in Annapolis, Md., and it has brought together the youngest and oldest living Marine recipients of our nation's highest award for battlefield heroism in a photograph of epic proportions.

In a post on Twitter on Thursday, retired Marine Cpl. Kyle Carpenter, 28, said that he was “beyond humbled and honored” upon meeting with retired Marine Chief Warrant Officer-4 Hershel “Woody” Williams, 94, at the conference.

“As the youngest living recipient I can only hope to one day live up to his legacy,” Carpenter added.

Beyond humbled and honored by this moment. Hershel “Woody” Williams is the oldest living Marine Corps Medal of Honor recipient. He charged the beaches of Iwo Jima during WW2. As the youngest living recipient I can only hope to one day live up to his legacy. #MOHConvention pic.twitter.com/tR6rx4BWA0

Born Oct. 2, 1923, Williams was awarded the Medal of Honor for his actions during World War II at the Battle of Iwo Jima. On Feb. 23, 1945, then-Cpl. Williams, a demolition sergeant, repeatedly charged alone toward concrete pillboxes where the Japanese were firing machine guns in order to “wipe out one position after another” with explosive charges and flamethrowers.

“On one occasion, he daringly mounted a pillbox to insert the nozzle of his flamethrower through the air vent, killing the occupants and silencing the gun; on another he grimly charged enemy riflemen who attempted to stop him with bayonets and destroyed them with a burst of flame from his weapon,” his citation reads.

Carpenter, born on Oct. 19, 1989, was awarded the Medal of Honor for his heroism during the Battle of Marjah on Nov. 21, 2010, in which he threw himself on an enemy grenade that had landed on a rooftop security post, saving the life of a fellow Marine.

Carpenter nearly died from the grenade shrapnel, which tore into his face and body. He lost his right eye and many of his teeth, and has undergone dozens of surgeries since.

When asked whether he would have done anything differently during an interview with this reporter in 2014, he jokingly replied, “I mean I would grab that and kick it right back.'

“But besides that … I wouldn't change anything,” he added. “We're both alive and we're here and I'm fully appreciating my second chance.”