Getting a grip with the company’s most beloved knife. 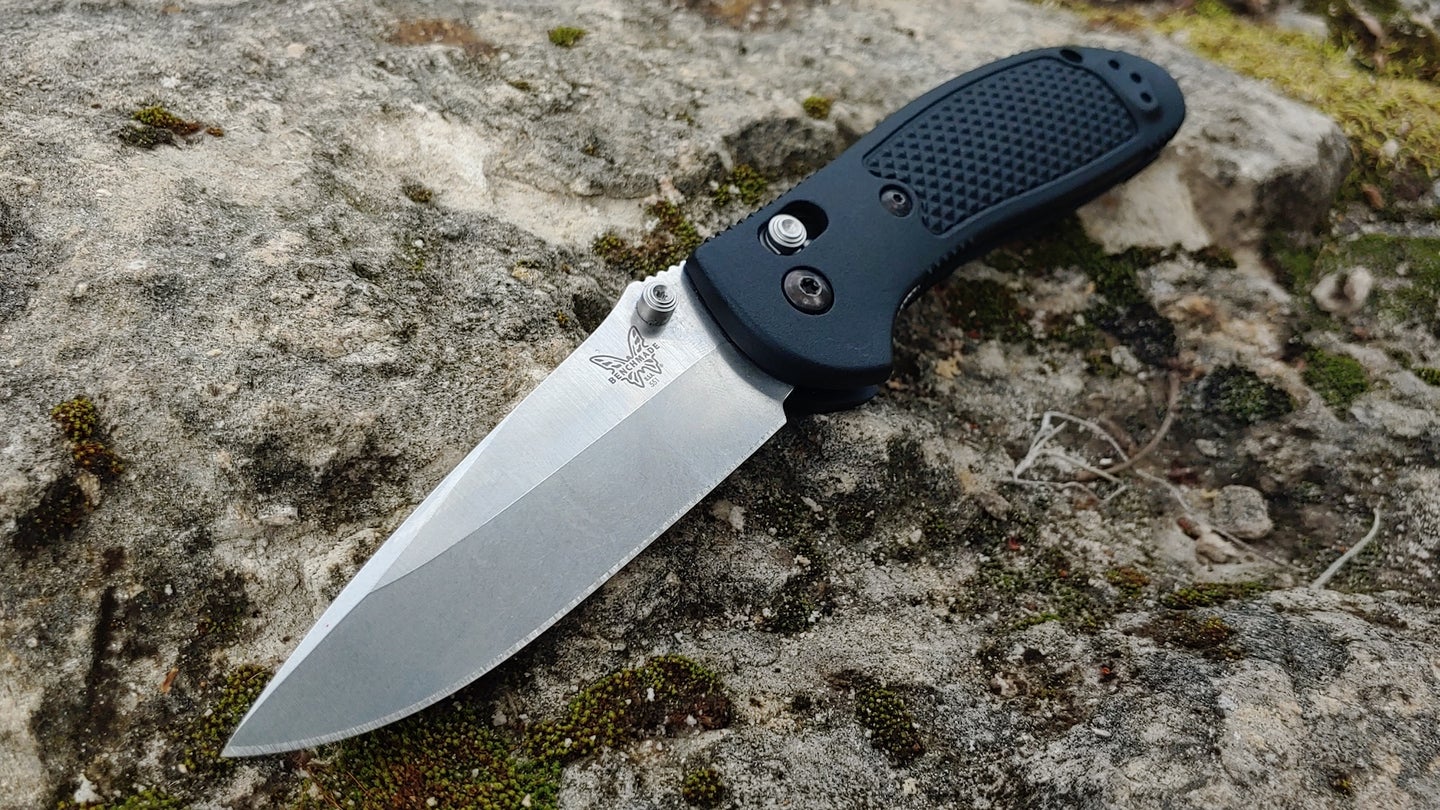 Benchmade is often considered a standard-bearer for the knife industry. Not only do they produce premium quality knives of all kinds of shapes and sizes for all sorts of different roles, but they are an American knifemaker who doesn’t just import blades from overseas: they craft their knives in Oregon City, Oregon, and make the American worker proud. Not to be too moto, but I love seeing an American company put out high-quality products.

If Benchmade is the standard-bearer for knife companies, then the Benchmade Griptilian is most certainly the standard-bearer of their knives — at least, when it comes to folding blades. The Griptilian has been kicking around long enough for me to buy it a drink, and Benchmade has released dozens of variations in the intervening years. Different blade types, different handle colors, finishes, and of course, the custom shop option opens it up even more. I’ve got my mitts on the standard Griptilian, the standard-sized model, with the satin clip point blade and black handle.

I know what you’re thinking: at first glance, it’s not a fancy knife. It’s not as eye-catching as the Infidel, or the SOC-P, or even as eye-catching as competitor’s offerings. It’s just a plain knife without much pizazz to it. That’s certainly true, but as my wife tells me when I ask her about my beard, it’s the inside that counts.

The Griptilian works because it’s a very capable and very strong knife. As the sum of its parts, it forms a knife that anyone can use for almost any task. The Griptilian is at home in the woods, on deployment, in urban sprawl, or warehouse, or any clime and place where you can take a knife. It’s a pocket knife, but it’s a premium pocket knife. It’s a no expense spared blade that performs at a higher level than most of its competition. Sure, the Infidel and SOC-P are cool, but the Griptilian is far more useful.

A combination of its features and size ensures the Griptillian is legal almost anywhere in the United States, which is a big plus because knife laws are wonkier than gun laws in most states. If the standard is too big, take a peek at the Mini Griptilian.

Benchmade ships the Griptilian in a simple blue cardboard box reminiscent of the boxes new smartphones come in. The knife comes complete with a little baggy made from the same cloth you clean glasses with. Not sure why, but hey, I always got classes to clean.

The Griptilian comes in two sizes, standard and mini. With the standard model, we get a 3.45-inch blade topped with a clip point tip. This plain blade features no serration, but serrated options are available. I prefer a plane blade for a longer cutting edge and an easier to sharpen experience. With the blade in the open position, the Griptilian measures out to 8.07 inches. Closed, the knife gives you a compact 4.62-inch design. The Benchmade is surprisingly light for its size. It weighs only 3.88 ounces. Comparatively, another high-quality knife, the Spyderco Gayle Bradley 2, weighs 4.4 ounces, and I consider that an already lightweight knife.

Benchmade trimmed weight by using Valox as the handle material. It’s super lightweight and admittedly feels cheap. The difference between feels cheap and is cheap should be noted, and I’m not at all unsatisfied with the function and quality of the grip. They are heavily textured for a good grip on all four sides with a variety of texture patterns. The preinstalled pocket clip is reversible, and the knife features an ambidextrous layout. Open studs on either side make flicking the blade open easy. The Axis locking system allows for a quick pinch to unlock the blade and return it to the handle. A nice feature for those who live wrong-handed.

The blade’s satin finish is nice without being tacky. It’s reflective but not shiny and obnoxious. I like it, and that’s not a surprise as I usually like the ‘stainless’ look. Black finishes are, of course, available. Mel Pardue designed this knife, and I wasn’t familiar with the man. I dug into it, and he has been making knives for over 40 years. Pardue teamed up with Benchmade, and the fruits of their partnership seem to be finally made knives.

How we tested the Benchmade Griptilian

The Benchmade Griptilian became my EDC knife for roughly a month as I parsed out slices and some dices to the world around me. As my EDC knife, it was upon called to open Amazon boxes, cut 550 cords, free Barbies from the clutches of those security ties, and interact with the great outdoors a hefty amount. I also used it for more interesting tasks: I’ve stripped wire, made feather sticks, sharpened sticks to spears to roast marshmallows, and cut through some rather thick rope when cleaning my shed.

The insanely sharp blade sleeves through everything. Holy crap, does Benchmade send their knives out nice and sharp, and I appreciate that. The blade is made from S30V, a premium steel designed for premium knives. Griptilians come in both 154 CM, and S30V and both are great choices. S30V provides users with a very long-lasting blade. Sure it might be rougher, but that edge seems to last forever. It’s not the easiest to sharpen, but you’ll get it there. I resharpened mine only for testing purposes and got it back up to snuff without breaking a sweat. It’s not necessary since you can send it to Benchmade, and they’ll sharpen it right up for you.

The clip point blade makes it versatile and provides it a nice point and sufficient belly for good cutting potential. The belly glides through vegetables like tomatoes and turns chicken breast into sliced meat without difficulty. The swedge is quite aggressive for a small knife and reinforces the tip making it plenty of punch for penetrating tasks. I slammed the knife into a tree several times, and the tip remains in perfect shape.

As my pocket knife of choice, the Griptilian is deployed a few times a day. I loved feeling the blade slide out of the handle and flip open. It does so with a satisfying chunk and locks into place every time you flick it. Flicking it open requires nothing more than a quick hit with the thumb and blade glides outward and into place with ease. The Benchmade Axis lock provides a consistent and very sturdy lock up. When locked, the blade has zero detectable wiggle forwards and backward or side to side.

When you name a knife Griptilian, you expect that grip would satisfy. It most certainly does. The various texturing points provide a very nice grip for the bare hand. I live in Florida, and it’s July, so as you’d imagine, I’m sweaty all the time. Yet, even my sweaty hands didn’t slip the grip.

On the spine of the knife, we have a combination of grip created by the polymer handle, a textured metal insert, and blade jimping. This forms a perfect thumb rest that allows you to steer the knife as you work. The grip texture creates some minor discomfort as you work and does dig in and create hotspots when doing long-term or hard work. That being said, what else do you expect it to do?

The Benchmade Griptilian does pocket knives right. To me, the stand-out feature is the deployment and Axis lock-up system. The way the blade glides from the handle is an enjoyable experience. The Axis lock keeps the blade in place and unmoving as you work. I trust it. Plus, I can open and close the knife with a single hand and flick of the wrist.

The ambidextrous controls are a nice touch for lefties and for when your right hand is busy doing something else. The blade design and steel choice form a versatile design for EDC-type tasks and beyond. The S30V steel holds an edge for a very long time and is nice tough steel for a working knife.

The Griptilian delivers top-notch ergonomics. The controls are ambidextrous but also easy to reach and use. The shape of the grip fills the hand and provides a cornerless, poke-free experience. However, you will quickly learn why the Griptilian is called the Griptilian: that texture clings to your hand and stays put.

The handle of the Griptilian uses a closed-back design, which makes it a bit of a pain to clean the knife. Pillar-style construction makes it much easier to get all that pocket gunk, dirt, and debris out of the knife’s grips.

The Griptilian is also roughly half an inch thick, and you’ll notice the knife in your pocket. It’s far from svelte compared to other similar quality knives. While I won’t complain about the aggressive texture hurting my tender hands, I will say it very quickly began to rub the corner of my pant’s pocket and caused small abrasions in it.

The Benchmade Griptilian is a damn fine pocket knife. It’s comfortable to wield and lightweight in the pocket. The Griptilian opens swiftly and only needs a single hand to do so. The texturing keeps the blade in hand, and that blade cuts like a dream. It’s not a cheap knife, but it’s certainly a buy-once cry-once affair.

FAQs about the Benchmade Griptilian

Q: How much does the Benchmade Griptilian cost?

A: The Benchmade Griptilian MSRPs at just over $121 on Amazon.

Q: My Benchmade Griptilian looks different than yours! Why?

A: Benchmade has made the Griptilian in a ton of colors, blade styles, and more. Different models have come and gone, so it’s not unusual for your Griptilian to be different than mine.

A: One is not necessarily better than the other. 154CM holds a fine edge longer, but S30V holds an edge longer overall. 154CM is easier to sharpen if that’s a concern.

Q: Can I change the cheap feeling grips?

A: Benchmade offers a G-10 grip for a hundred bucks more if Valorex turns you off. However, if you’ve already hit that buy it now button, a company called Flytanium makes Titanium, and Carbon fiber scales you can install.