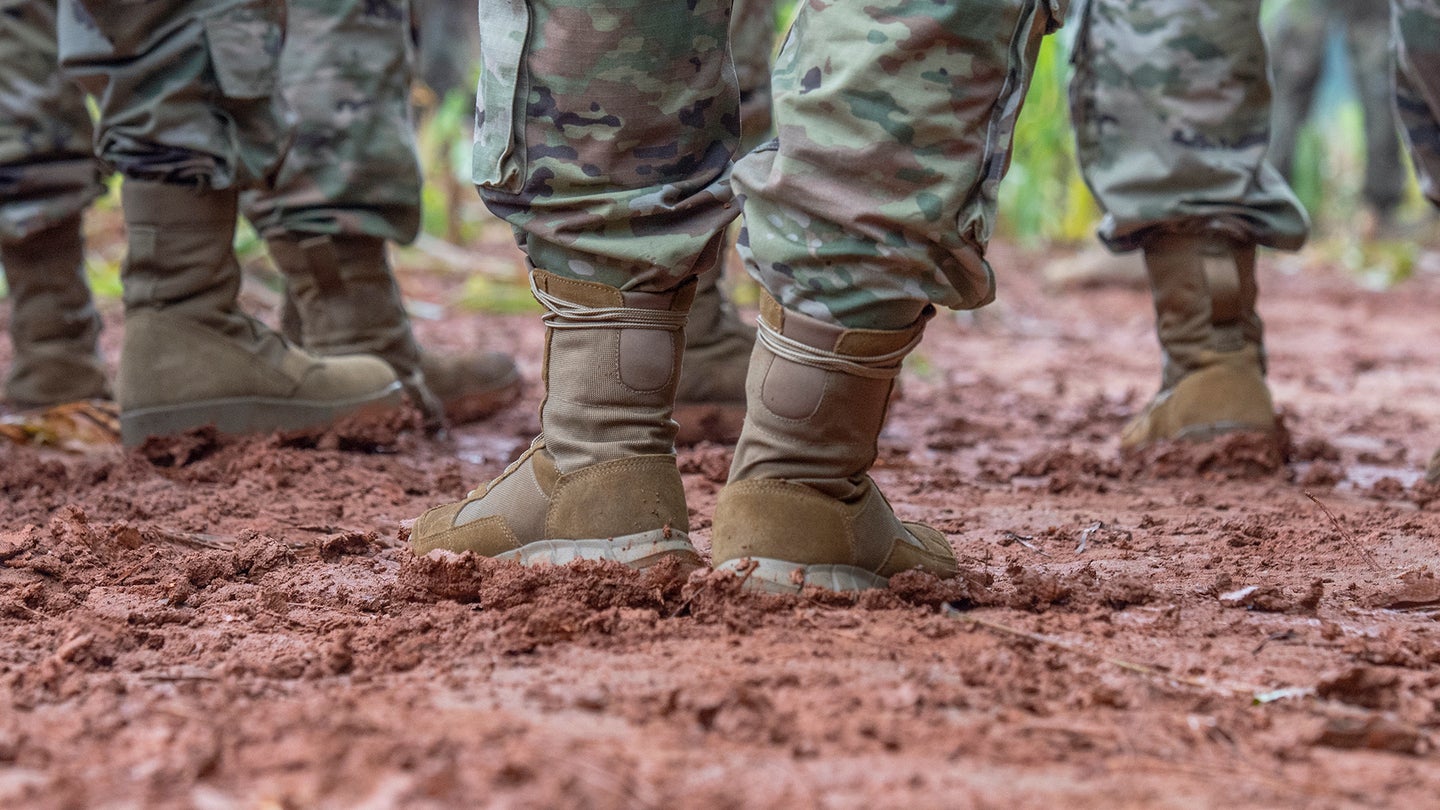 The best combat boots for any ruck or run

Of all the uniform items you use on a daily basis, your combat boots might have the most significant impact on your ability to do your job. If you’ve ever gutted out a ruck march or hump with blisters and shin splints, you know what I’m talking about. The same goes for everyone who’s completed an entire field exercise with soaking wet feet, or lugged heavy combat boots through unit PT.

I bet I had at least four pairs of combat boots in rotation at any given time. I had my everyday boots that just had to look good and be comfortable. My trusty Bates Lites came out for the CFT and any kind of boots-and-utes PT. Deployment called for the rugged, but rather ugly, RAT boots. Finally, I had inspection boots that only came out of my closet for inspections and ceremonies. Mind you this was in the earthly paradise that is southern California. If I had to deal with rain and snow, I would have had even more. Each pair had its own set of advantages and capabilities. As much as it sucks to buy uniform items you rarely wear, I do think having several pairs of boots is a winning strategy. It would suck to trash your only pair of combat boots doing PT on the one morning the CO decides to get to know you.

Do yourself a favor and wear appropriate combat boots. What that means for you might change from day to day, so you should probably invest in a few different styles. This list has boots for hot weather, cold weather, running, heavy equipment operation, and the color requirements for every branch of service. Read on to find your next pair.

The Danner Tachyon is a killer do-it-all combat boot, and it’s great to see it available in more than one color. This hot-weather boot slots in nicely between lightweight running boots and heavy-duty boots like Danner’s Rat boot, making it a great choice for everyday use. It’s comfortable enough for normal garrison life and supportive enough to survive in the field. Textile panels increase ventilation and reduce weight, while eyelets let water drain to get your feet dry quickly. The curved sole allows for more natural movement than traditional raised-heel designs. An elastic strap provides extra ankle support without making the boot bulky. Choose from a range of normal and wide sizes in coyote brown or polishable black.

Oakley makes all kinds of tactical gear, and they have your feet covered with the Light Assault 2 combat boot. As you might expect, this boot is aimed directly at athletic performance. Each component seems like it was chosen with mobility and weight reduction in mind, so don’t be surprised if this boot feels more like a running shoe than a combat boot. The upper uses nylon panels wherever possible to keep air moving and keep the weight down. The shock-absorbing sole is ready to knock out mile after mile at the quickest pace you can muster. Better yet, Oakley made this boot surprisingly affordable. Like other running boots, don’t expect the same level of performance with a heavy load on your back. These are built for speed, after all.

Steel-toe boots make up a relatively small subset of combat boots; thankfully, there are still great options like the Belleville C300 ST. This rugged boot uses a thick cowhide and nylon upper to keep it in the fight for years to come. The thick, well-cushioned midsole helps to keep your feet comfortable, even if you spend all day walking on concrete and asphalt. The Vanguard outsole comes from the same company that provides durable, slip-resistant soles to all kinds of bootmakers. The protective steel toe satisfies both ASTM F2412-18 and F2413-18 standards. These boots tend to be fairly warm, so they’re best suited for cooler climates. According to many people who wear these boots, it’s a good idea to size down when ordering and expect a short break-in period.

Marines love the Bates Lights for living up to their name and providing a quality combat boot that doesn’t make running the O-course any more of a torture session than it has to be. These boots use a flexible, lightweight upper that blends the comfort of a running shoe with the support of a combat boot. Speed laces make tying and untying a breeze, and the breathable upper keeps temperatures down. The cushioned sole is perfect for running but will break down quickly if you try to use these boots on a hump. The material is also much softer than what you’ll find on most combat boots, so jagged terrain will also accelerate wear. Keep them fresh for PT and your annual CFT, though, and you’ll be golden.

The Air Force puts its people in a bit of a pickle with that odd, sage green color choice, but Rocky offers a boot that satisfies Uncle Sam’s fashion choices and your need for high-quality footwear. The leather and nylon upper is built to last, even in harsh conditions. A layer of Gore-Tex keeps water out, and 3M insulation keeps warmth in. Extra reinforcement adds stability in the ankle area. Rocky outsourced the sole to Vibram, resulting in the same kind of grippy tread that has proven success on all kinds of military and civilian boots. This is an ideal option for anyone who spends a lot of time on their feet in a cooler climate. For summers in the southern United States, you’ll want something with more ventilation.

I’m not sure how comfortable I am with the idea of asking service members to cough up more than $300 for a pair of combat boots, but the Danner Rivot is here for you big spenders. This modern take on the combat boot uses technology taken from civilian hiking boots to perform better than traditional combat boots that feel more like a work boot. The breathable mesh liner allows more airflow than your average jungle boot and wicks moisture away to keep your feet dry. Webbing made from 1,000-denier nylon adds support where it’s needed most without adding unnecessary weight. Rough-out leather keeps this boot tough. The Vibram sole is durable and shock-absorbing, with a tread pattern that’s designed to provide grip in any direction. Is it just me, or do the other combat boots suddenly seem old-fashioned?

Did you honestly not see this coming? Making fun of you guys might get old someday, but not today.

Related: The best tactical boots to keep you grounded in any situation

Why should you trust us

I’ve worn my share of combat boots, from slogging through the Quigley and hazing myself on a frozen endurance course to pounding Afghan sand, and I can confirm that having the right boot for the job makes a huge difference. As with all my gear guides, I take pride in weeding out the imitators and finding products that are worth your time and hard-earned money. Whether you need eye-pro or tips on land nav, I have you covered.

The most common types of combat boots

Look past the endless array of shapes and colors, and you’ll see that combat boots can be neatly divided into a few categories based on their intended use. A few features separate combat boots for climate, activity, and protection. You almost certainly need more than one, and you might own one of each by the time you’re done serving.

Basic combat boots are sometimes referred to as either jungle boots or moon boots, depending on what type of climate they’re built for. It’s a good idea to own one of each in good condition at all times.

Jungle boots are thinner, lighter, and uninsulated. They feature large synthetic panels to create airflow and allow your feet to stay cool in warm environments. Open metal eyelets in the arch areas allow water to drain out, should you need to cross a body of water.

Moon boots are designed for cold weather. Instead of textiles, they use leather and insulation to keep your body heat inside. Thicker soles raise your feet off the ground to protect you from the cold.

Once the U.S. military started emphasizing functional fitness, exercising in combat boots became standard practice across branches. Unfortunately, most combat boots are lousy to run in.

Running boots are designed for speed. They weigh very little compared to traditional combat boots and feature soles designed for running rather than rucking. If you want to improve your CFT or O-course time, these are sure to help.

Because they place a premium on lightness, running combat boots don’t hold up well under heavy loads. Wearing them on a field exercise with heavy gear can easily pack out the soles and leave your feet aching. I recommend saving these for PT and timed events.

Most of you probably don’t need steel-toe boots, but some of you need them to do your job. Having adequate protection for your feet is critical to staying mission-ready and preserving your long-term health.

Uniform regs dictate that you can’t just roll into work with a pair of Chippewas on your feet (no matter how awesome they are), so you need to find a protective pair of combat boots like the ones on this list.

Much like running boots, these are job-specific and shouldn’t be worn for other activities like field exercises or PT. Keep them in the shop, where they belong.

What to look for when buying combat boots

All of the major combat boot manufacturers build quality products, but not every boot can do what you need it to do. Each branch of the military has requirements a pair of boots must meet to satisfy uniform regulations. Don’t waste your money on something you aren’t even allowed to wear.

You’ll also want to consider your environment. If you’re stationed in a hot, humid climate, prioritize ventilation and those little eyelets that let water escape instead of marinating your feet until you have to limp to medical. If you encounter cold weather on a regular basis, stay warm with insulated boots. Remember that combat boots look very similar, so it’s important to read the fine print.

The advantages of owning combat boots

The obvious advantage of owning combat boots is not being out of regs and getting your ass chewed every day until you get permanently assigned to the sergeant major’s hot seat. Aside from that, a decent pair of combat boots can make all the difference in your comfort and performance.

Combat boots are designed for specific environments. Some keep you cool and dry in tropical climates, some keep you warm in cold climates. Others protect your feet with steel toes. All should allow you to do your job without blisters, hot spots, and stress fractures caused by poor fit and insufficient support.

Your first goal should be to accurately determine your size. Any time you switch brands, consult the manufacturer’s sizing chart to make sure you set your feet up for success. Once you’ve done that, use this guide to find service-appropriate combat boots that can get the job done for you.

How we chose our top picks

The Task & Purpose team has plenty of collective experience with combat boots, but there’s always more to learn. Since none of us have worn all the options out there, I turned to the people who have––thousands of customers who shared their real-world experiences in the form of ratings and reviews. By putting our knowledge and expertise together, I’m confident you can find what you need on this list.