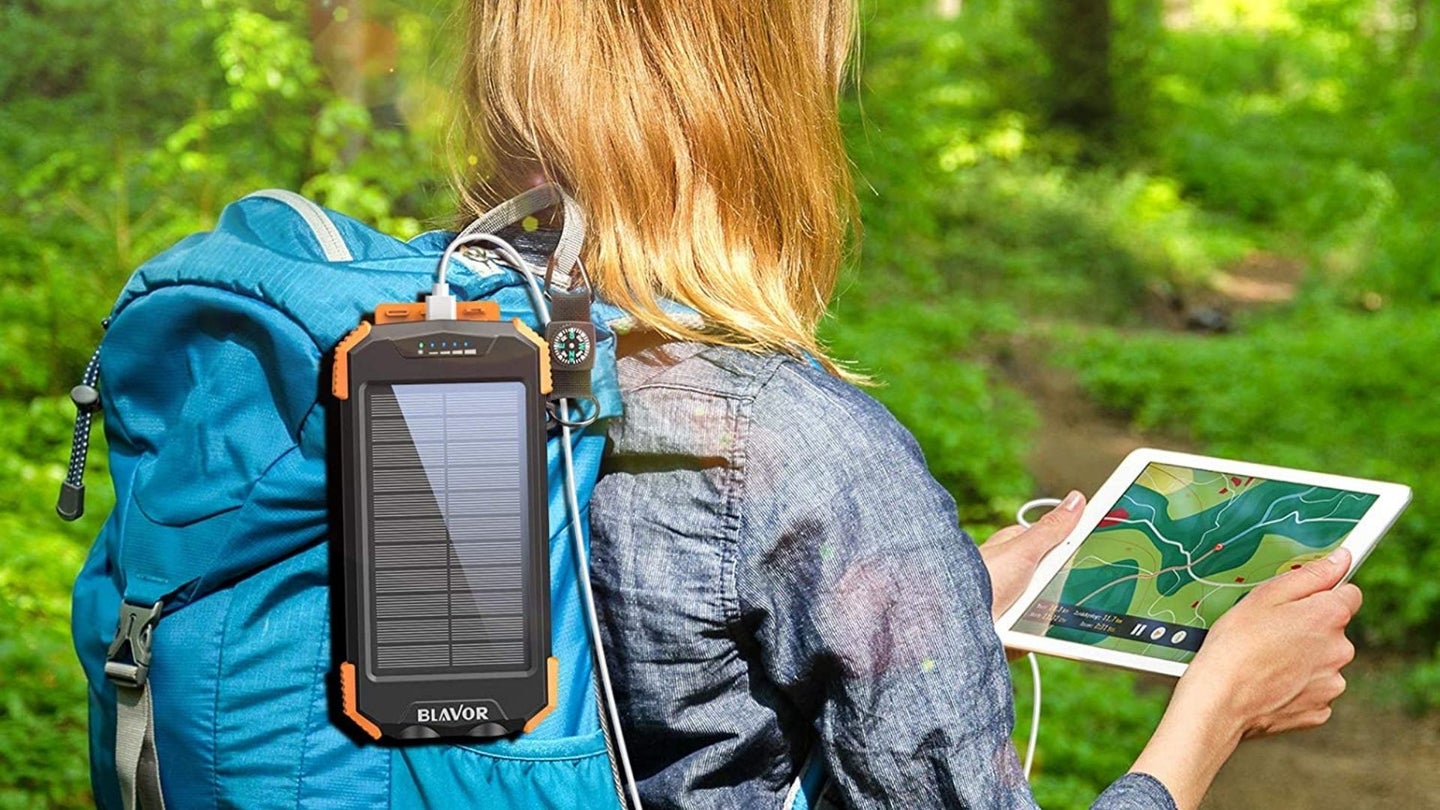 Thanks to cell phones, we can now walk around with the cumulative knowledge of humanity in the palm of our hand. The problem is that, once you venture out from the world of wall outlets and 12-volt car outlets, our phones have a very limited lifespan. If you plan on camping, hiking, or doing serious off-grid travel, stopping to charge your phone may not be an option. To keep all those apps, maps, and your camera handy, you’d better pick up a solar charger. These handy devices take up very little room, and can keep your phone and other devices charged anywhere there’s sunlight.

Take a look at our list of go-to solar phone chargers and keep those electronics charged with the power of the sun itself.

If you’ve been following us very long, you know we’re fans of the GoerTek solar bank. This versatile solar phone charger strikes a great balance between price and functionality to bring you features you’ll love without breaking the bank. As the solar panel stores energy, you can keep tabs on the internal battery’s power level with a series of LED indicators showing its status in 25 percent increments. A fifth LED provides positive confirmation that the solar panel is actively working. For a quick refill, purchase a wall adapter separately. The internal power bank is powerful enough to recharge an iPhone more than seven times. Three USB ports let you power up multiple devices simultaneously. The rugged case is durable enough for camping and survival situations, and there’s even a 36-LED flashlight with three intensity settings.

This Blavor solar phone charger is budget-friendly and more than capable of keeping your phone charged throughout the day. The relatively small battery can still recharge your iPhone three times. This solar backup is waterproof and built to take a few knocks without missing a beat. Five LED indicators let you check on the battery’s power level at a glance. Charging options include two USB ports and one type-C port. We like that this phone charger’s flashlight is mounted on the end so it can be carried like a traditional flashlight. In addition to a carabiner for hands-free operation, you’ll get a tiny compass for navigating in a pinch. This isn’t the highest-performing option on our list, but we’re always happy to see great alternatives that punch above their price.

The BigBlue foldable solar phone charger is the big dog on our list. Its four panels each measure more than 11 inches long and six inches wide. Fortunately, they fold up to make the whole thing a little easier to store when not in use. In addition to being larger than the alternatives, this solar charger is also very efficient, resulting in reduced charging times. Its solar panels are also coated with a protective film to ward off the elements. That doesn’t make this product waterproof, but it is tough enough for outdoor use. Charge multiple devices at once with the three USB ports. Keep in mind that this does not include a battery, so you’ll need to charge devices during the day. As fast as this solar charger works, that shouldn’t be much of a problem.

This solar phone charger from Tekplunze boasts the most powerful battery backup on our list. With all that capacity, you’re better off charging the battery at home and then using the solar panel as a backup due to slow recharge times. Use the two USB ports and one type-C port to charge up to three devices at once. This charger is also capable of wireless charging; just place your compatible device on top of it and skip the cables altogether. The adventure-ready exterior housing is shock-absorbing, waterproof, and comes with a carabiner so you can attach this to the outside of your pack to recharge on the trail. The built-in flashlight isn’t the most powerful on this list, but it does come with an automatic SOS mode for emergency situations.

For extra charging power in a more urban environment, you’re going to need something like the Hiluckey solar power bank. This workhorse isn’t much larger than the rugged camping solar chargers we found, yet it manages to pack in four collapsible solar panels to quickly fill its battery with solar energy. At full capacity, it can charge your phone up to 10 times. That power reserve is easy to restore because this charger’s solar array refills its own battery up to six times faster than the competition. Each of the two USB ports automatically identifies any device you plug in, and adapts power delivery to yield the fastest charging time. A built-in flashlight features an SOS mode to signal for help in an emergency. If you’re willing to trade outdoorsy features to get more performance, this is the option for you.

Related: 7 ways to upgrade your campsite

There are plenty of quality solar phone chargers on the market, and the primary differences are in charging speed, battery capacity, and extra features. To get the fastest charging speed, look for options with a fold-out solar array rather than a single panel. Internal batteries let you store energy on the go, while some require your device to be plugged in while the charger has exposure to direct sunlight. Keep in mind that some options can also be plugged in for fast charging when a wall or car outlet is available. Added value can be found in options that include things like battery level indicators, waterproof housings, and built-in flashlights.

Having renewable power on the go is a game-changer. Backup batteries extend device usage significantly, but solar options let you continue to acquire electricity as long as you have sunlight. Even in the most remote conditions, you can charge things like your phone, GoPro, and GPS all day for sustainable use. Solar phone chargers can also prove invaluable during emergency situations. When help may not arrive for hours or days, it’s reassuring to know that your connection to the outside world doesn’t depend on electrical infrastructure or your car’s battery.

Solar phone chargers are very affordable. Entry-level options can be found for less than $35 and keep you charged up on the move. For about $45, you’ll buy into decreased charging times, enhanced battery capacity, and a range of bonus features. The most powerful portable solar chargers will only run you a little more than $50. These premium items prioritize charging speed and power output, but do not have a backup battery. They should be used to charge your devices directly in real time. They’re also larger than many alternatives, so it’s important to think about how you plan to use your solar phone charger and pick one that meets your individual needs.

Related: 9 of the best camping and survival hatchets money can buy