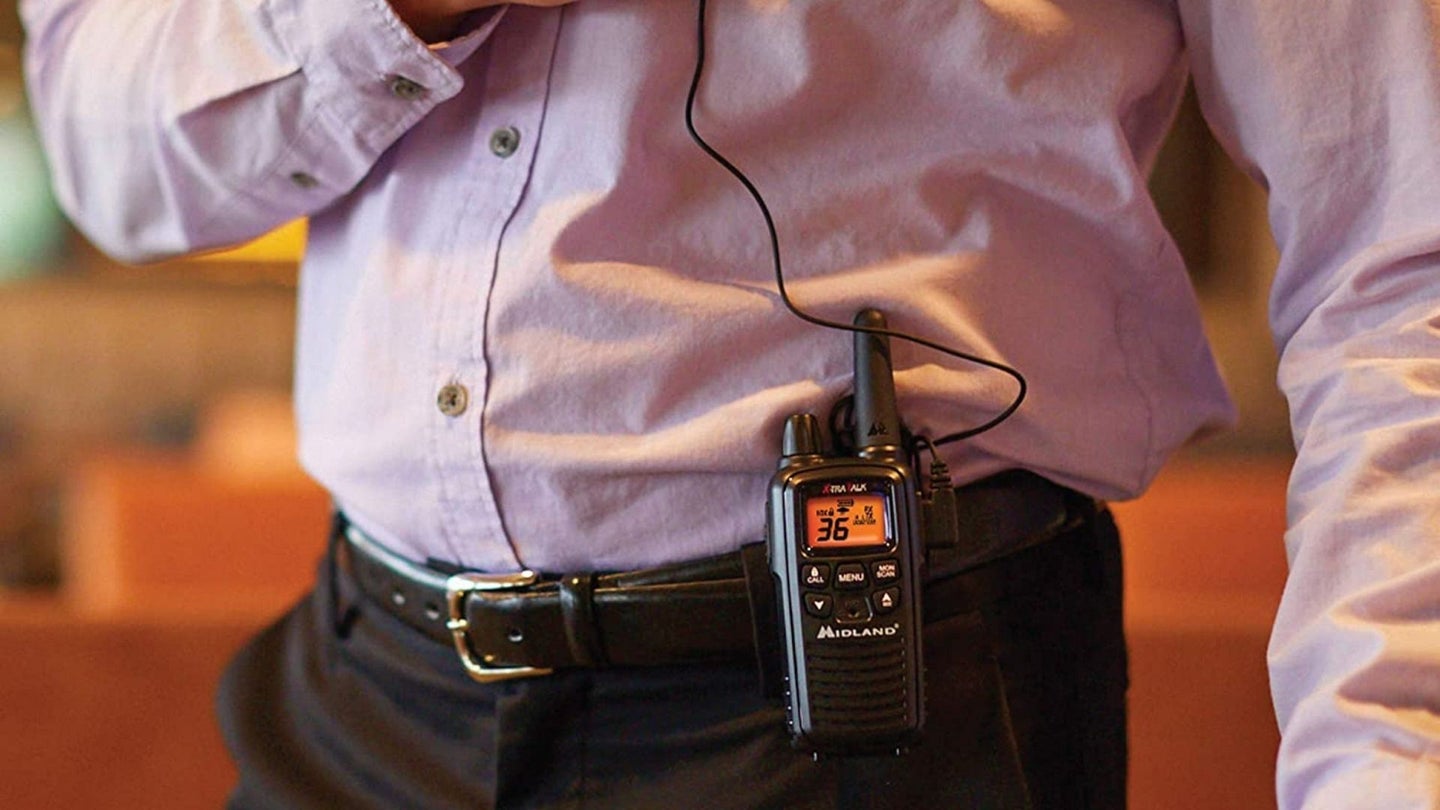 These quality two-way radios will help you stay in touch with your team.

Communication is key, especially when it comes to survival situations. You could be exploring new terrain, tracking down a target, or just be well out of cell range. Whatever the circumstances, two-way radios ensure that you can always touch base with your crew. Of course, not all radios are made alike. When it comes to maintaining a tactical advantage, you need something that’s durable, with a powerful battery and a broad range. While most two-way radios look similar, finding something that can work in the most strenuous settings is both an art and a science. Just imagine how long The Longest Day could have been had U.S. troops not been using quality tech.

So, to save you time and make it easier to choose the best two-way radios around, we’ve detailed the leading options. Check out this breakdown for everything you need to know about this critical tech.

The Cobra MR Handheld Floating VHF Radio is a solid approach, especially if you are planning on using the radio over the long term. It features a handheld design and a tough exterior that is designed to survive getting dropped in water (it even floats). The radio itself features prominent dials and a rigid antenna, giving the six-watt VHF system a wide range. Connected is a backlit LCD screen that displays the radio station, volume, and other helpful metrics. By incorporating a noise-cancelling microphone, you don’t have to worry about background noise when talking. Controlled via intuitive buttons on the side, this radio makes it easy to use in an emergency. Paired with the ability to access American, Canadian, and international bandwidths (as well as the NOAA weather station), this radio gives you a real tactical edge. [Buy]

If you are looking at getting the next generation into the importance of radio communication, the Motorola T100 Talkabout Radio is a worthy place to start. Yes, it has a simple design, but that is what makes it so useful. It weighs only a quarter-pound and comes in a set of two. Accessing 22 channels, this radio is designed to relay communication between all types of FRS and GMRS radios. With bold blue color, it’s difficult to lose; and, thanks to the reasonable range, you can move around while you speak. The push-button controls pair with the crisp LCD screen, giving less-experienced radio users a chance to learn the specifics. The moderately sized antenna and standard structure make this a fantastic jumping-off point for radio enthusiasts. Plus, since it is priced to not break the bank, it works best as an investment in the future. [Buy]

Need something compact that can work in a survival situation? Check out the Retevis RT19 Walkie Talkie for Adults, a two-pack of radios that can work in all environments. It features a temperature-resistant, 1,300 mAh battery that lasts upwards of 14 hours on a single charge. Compatible with any other RT22 radio that’s within range, this radio is equipped with five communication channels. Able to access 22 separate channels, the sturdy antenna is able to get clear and crisp audio. Meeting all FCC criteria for this kind of tech, the rugged design lets you use it securely and ethically. Connecting to a belt clip and including earpieces for stealth, this radio set makes an ideal outdoors companion. [Buy]

Heavy-duty by design, the Pxton Walkie Talkies Rechargeable Long-Range Radios make a solid addition to any survival kit. The UHF radio system is compatible with frequencies between 400 and 470 megahertz, letting you communicate back and forth with ease. It connects to 16 channels and can be programmed for quicker results. The VOX control works together with the scanner to let you speak clearly and without interruption. Equipped with earpieces and clips for hands-free use, this two-pack of radios is great in an emergency. The five-watt system reaches as far as three miles in open spaces. With a battery that can operate up to 12 hours with ongoing use and 96 hours without, it is an essential addition to any bug-out bag. [Buy]

Particularly for those who tend to explore parts unknown — places without cell service — the Midland Long-Range FRS Two-Way Radio is a must-have piece of equipment. It comes with three radios, each able to work completely noiseless. The system is equipped to reach 36 channels, including the NOAA weather alert station. Adhering to privacy standards, you can choose from thousands of frequencies to ensure your communication is secure. With a sleek black design, they are a subtle addition even when you use the belt clip. Water-resistant and tough, these radios are equipped to weather even the most intense situations. Recharging via AC, it is easy to get spare battery packs if you plan to make a lengthy trip. Built to last over the long-term, these tactical two-radios are excellent in demanding situations. [Buy]

Why should you trust us

I’ve been reviewing products for five years, focusing mainly on tactical gear, automotive supplies, and the financial sector. Using my three years’ experience as a news correspondent and my academic background in the sciences, I provide objective and accurate reviews that readers trust. My work is featured on The Drive, Car Bibles, Narcity Media. Some of my most recent pieces for Task and Purpose include reviews of emergency blankets, knife sharpeners, and machetes; which, like two-way radios, can help in a survival situation.

The most common types of two-way radios

Governed by the FCC (Federal Communications Commission), airwaves are sorted depending on the purpose of the radio. You wouldn’t want a stranger chirping in while you’re relaying specific or sensitive information, and by sticking to the proper radio types, you can avoid this. The right radio ensures that whether you are communicating military jargon, chewing the fat, or dealing with sensitive information, you are entirely secure.

Short for Family Radio Service and General Mobile Radio Service, these bandwidths are built for business, personal, and recreational use. An FRS radio has a wattage limit of two and the channels have a range of roughly a quarter-mile in normal situations. These radios give you access to 22 channels, with over half of them being low-power options that rely on a half-watt system. FRS radios are governed by Part 95 of FCC regulations.

At one point, GMRS radios were lumped together with FRS radios, but since 2017 this has changed. Nowadays, they are deemed separate. A GMRS radio requires a license, unlike its counterpart. It can access 30 channels overall, though only 22 of them can be reached with these models. They also stand out because the system uses power over two watts. Also governed by Part 95 of FCC rules, a household needs only one license.

Usually referred to as standard Ham radios, these are regulated by part 97 of FCC regulations. Accessible to those of all ages, these radios require a license to legally operate them. Depending on the level of that license, you can access different frequencies. It is by far the most powerful type of two-way radio, though it is also bulky and more administratively tedious.

These radios usually consist of a large central structure that links to an external antenna. Though you can find some mobile options, they are still far less convenient than other options. However, the function is more advanced. You can access UHF, VHF, and HF frequencies, giving you the chance to fiddle with morse, pictures, and video communications.

Designed for business and personal applications, these two-way radios often come at a higher price point than GMRS counterparts. There is no license needed to operate these devices, governed by part 95 of FCC regulations. The radios can also be used by those of any age and are common in the transportation industry.

These radios have access to 40 channels in AM settings and in Single SideBand mode. However, as a result of the fact that these channels are shared, it is not a desirable system for secure communications. In most cases, you will find these two-way radios in long-haul trucks because of the structure and range.

Features to look for in two-way radios

When assessing the merit of two-way radios, there are a few features to keep in mind. First, think about the type that you want. Consider how you plan to use the radio and identify the bandwidth you’ll get the most value out of. Figure out if you need a license or if you are already certified to operate that technology.

Next, look at the range. Directly related to the wattage, the distance the signal travels relies on the amount of power supplied. While FRS radios use a lower wattage, GMRS gives you a bit more wiggle room in terms of power. Once you’ve figured out the range, think about the number of channels you can access. Be sure that you can get to the NOAA system, especially if the radio is to be used in an emergency situation.

Finally, you’ll want to look at the actual radio structure. Think about how it charges and how long the battery life will last. Investigate whether it is reasonably durable and waterproof. Look at the LCD screen and the controls and be sure that you can easily use the device. Be sure that the radio is going to work correctly, has received FCC approval, and is reliable (like the models on this list).

Do you need a two-way radio?

Historically, two-way radio was more than a convenience — it was an essential part of communication. While cell phones and emails may have taken over, they rely on infrastructure like cell towers. If you are far off the beaten path, you might not get a signal, making two-way radios more of a necessity. Whether the power went out in your neighborhood or you are hiking up a mountain, staying in touch is pretty critical.

Sure, you could get a satellite phone, but those are way more expensive and tedious (especially if the radio is a backup supply). Two-way radios are cost-effective and sure to work regardless of the network around them. Convenient and user-friendly, the functions are intuitive; and, for most of them, you don’t need a license. The benefits don’t stop there, though.

How we chose our top picks

Since two-way radios are regulated, our first step in this piece was getting familiar with FCC guidelines. From there, we sought out reputable digital sources with information on the various types and features expected of two-way radios. We were then able to curate a shortlist of candidates before culling them based on criteria like durability, range, battery life, and ease of use. Finally, we investigated the top contenders one by one to determine if the technology has proven itself worthy. The result is a thorough cross-section of the best two-way radios on the market so that, whatever your budget or needs, you’re represented on this list.

Related: Create a lifeline with the best emergency radios