Review: the CRKT Pryma multitool is a solution in search of a problem 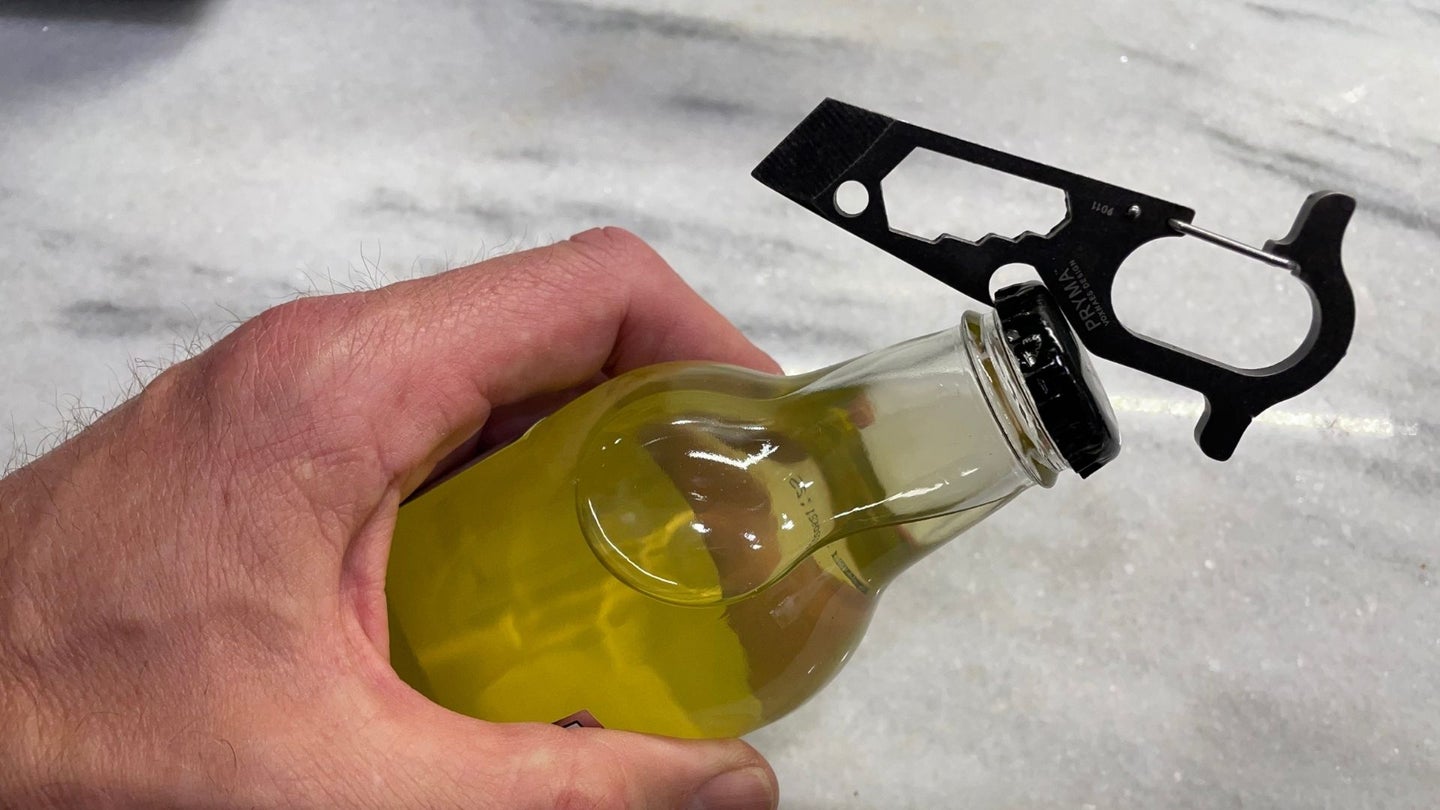 What is it? I do not know. Could thou use it to pick thy nose? Would she wield it to engage her foes? Nobody knows. Nobody knows.

It’s made of steel, that’s for sure. What’s its purpose? Is it pure? Oh what, pray tell, is it its allure? It’s inspiration is obscure!

I could use it to pop a beer. I would not use it to scratch an ear. Is it a knife designer’s joke? Because in my pocket it doth poke. Ouch!

The label says it is a multitool. Me thinks the marketer doth try to fool. Its utility boggles the mind, ya? The mystery of which I speak is the CRKT Pryma.

When the CRKT Pryma arrived via mail, I didn’t know what to make of it and felt like the first evolutionary biologist to witness a platypus. The device was attached with zip ties to an attractively branded piece of green cardstock encased in a plastic envelope. Ironically, the first thing I had to do to use this multitool was to find another tool, a knife, to cut the Pryma away from its backing. While I immediately recognized the morphology of the fishhook-shaped bottle opener, I had a much harder time divining the purposes of the other features built into the device. Referring to the packaging, I learned that the Pryma is intended to be a pry bar, bottle opener, multi-wrench, and glass breaker — an odd, random juxtaposition for certain. I sat with the Pryma for a bit, trying hard to be open-minded about its existence as an artifact in the material universe. I held it in my hand and closed my eyes to simply experience it on a tactile level. It felt sharp and edgy to my fingers. I asked myself, what need did the designer seek to fulfill? What problem was he trying to solve? What opportunities was he trying to create? What was I missing? Was there intentionality in the design, or was it drawn up after a few beers into a Friday happy hour? I was bound to find out.

The CRKT Pryma is a small device — 3 inches long, about ½ to 1.5 inches wide, and about ⅛-inch thick. On the narrow end, it has a beveled edge and 3/16-inch diameter keyring hole. Behind the tip is a zig-zagged cutout for ¼, 3/8, 5/16, and 7/16 inch nuts and a fish hook style bottle opener. Sitting atop the device is a small steel bead that barely protrudes from the surface. I was flummoxed by its purpose, so I read the directions. The schematic on the back of the packaging revealed this to be a glass breaker. The CRKT Pryma weighs a scant 25.5 grams (0.9 ounces) and is made from 3Cr13 stainless steel.

How we tested the CRKT Pryma

Test 1: Prybar. As the great and ancient Greek engineer, Archimedes, once said, “Give me a lever long enough and a fulcrum on which to place it, and I shall move the world.” Simple machines, like levers, are supposed to make work easier through the scientific principle of mechanical advantage. The effort, or input force, is applied to one end of the lever over a fulcrum to intensify the output force on the load. The further away the effort is from the fulcrum and the closer the load is to the fulcrum, the greater the mechanical advantage. Unfortunately for the Pryma, with a beam length of 2 ¾ inches I found very little utility for it other than opening paint cans — which it did with ease — or getting purchase under pull-tabs on cans. I realized that just about any flat-head screwdriver will do the same task while achieving greater mechanical advantage. Marines, however, might find it useful in port-o-let graffiti efforts as the hardened steel pointy tip will make quick work of any plastic door or wall.

Verdict: Flat head screwdriver: 1, CRKT Pryma: 0. Of note, the pry bar tip was useful in gouging through the packing tape on boxes, but took several passes. A knife would be more efficient.

Test 2: Bottle opener. One of the things I carry on my keychain at all times is an aluminum beer bottle opener I bought at a Speedway gas station in Ohio many years ago. So to test the Pryma in a scientific manner, I used my existing bottle opener as the control group and the CRKT Pryma as the experimental group in opening several bottles of Heinieken beer over the weekend. Did the Pryma successfully remove the caps? Yes, it did. Was it easier and more efficient to use than a keychain bottle opener? No, it was not.

Verdict: Gas station bottle opener: 1, CRKT Pryma: 0. We repeated this test several times per day over the weekend and validated each result. Consistently, the keychain bottle opener outperformed the CRKT Pryma. Beer me!

Test 3. Multi wrench. To test the multi wrench, I loosened and tightened some bolts on some of my mom’s dining room furniture. She wasn’t pleased. While the CRKT Pryma was able to turn a nut around a threaded bolt, the manipulation was awkward and hurt my fingers when loosening tightened bolts or cranking down hard on loose bolts to tighten them. Additionally, the pry bar tip frequently interfered with the rotation of the multi wrench in many instances. I’ve got to be honest. I believe in monkeywrenching, and if you’ve ever read Edward Abbey’s book The Monkey Wrench Gang, you’ll know why. And when I need to actually turn a nut to tighten a fastener, I’ll either use an appropriate Craftsman combination wrench or my trusty ratchet set. Like the lever, both work on the principle of mechanical advantage by positioning the input force far from the axis of rotation and output. The further the distance, the greater the achievable force. The CRKT Pryma, at most, can offer 2.5 inches of distance from the center of rotation and, to be frank, hurts the fingers when cranking down hard on nuts.

Verdict: Craftsman wrench: 1, CRKT Pryma: 0. Now could you toss the Pryma into a piece of an enemy force’s machinery to disable or break it? That’s an interesting question.

Test 4: Glass breaker. About the only reason I can conceive of carrying a glass breaker is to break open an automobile windshield in the case of an emergency. While home visiting relatives this weekend, I showed my family the CRKT Pryma and asked for someone to volunteer their vehicle to test the glass breaker. As you might expect, I had no takers. Unwilling to use my own vehicle and wanting to avoid any vandalism charges, I took the Pryma to my basement to test it on a piece of ceramic bathroom tile. I was pretty concerned about wrapping my fist around the sharp, pointy pry bar tip, but for you, dear readers, I will make sacrifices. With a pair of safety goggles on, I laid the tile on the concrete slab floor and administered three hard hammer fist strikes to the tile. While I was unable to crack the tile, I did (thankfully) avoid puncturing my palm on the pry bar tip.

One of the beautiful things about being human is our ability to learn vicariously from others, and there’s usually another human who is crazy enough to try what we cannot or will not do ourselves. A guy named southernprepper1 has a great video of the effectiveness of using different tools to break auto glass. While he did not test the CRKT Pryma, he did try two larger similar devices from another manufacturer. Check out his failures here. Considering that force is equal to mass multiplied by acceleration, I have serious doubts about the 25.52 gram Pryma’s ability to break auto glass from the outside or within.

This is tough. The progenitor of the CRKT Pryma, Jesper Voxnaes, is a knife-designing legend. I always try to be respectful of the intent of tool designers and give them the benefit of the doubt when evaluating their creations. I sat with the CRKT Pryma for a good long while, and just couldn’t find much to like about it. Check out Jesper Voxnaes own thoughts about the CRKT Pryma here starting at 11:21.

The pry bar isn’t long enough to pry most things that need prying. A good flathead screwdriver performs better. The bottle opener is substandard when compared to widely available keychain bottle openers. (The long end of the Pryma is on the wrong side of the bottle opener.) The multi wrench is difficult to manipulate and encounters frequent obstructions due to its positioning on the device. When clipped by the carabiner to my keychain, the pry bar tip frequently poked me in the thigh.

The CRKT Pryma is a hard pass for me. I’m sorry, Jesper. I really tried to like it.

Q. How much does the CRKT Pryma cost?

Q. Why did Jesper Voxnaes design the CRKT Pryma?

A. According to the manufacturer, he designed the Pryma to pick up where your EDC knife leaves off.

Q. What are the four advertised functions of the CRKT Pryma?

A. The CRKT Pryma is intended to be a pry bar, a bottle opener, a multi wrench, and a glass breaker.

Q. What is the finish on the CRKT Pryma?

A. The metal has a stonewashed finish.