Review: Is the CRKT Woods Chogan T-Hawk a novelty or necessity?

Does this tomahawk belong in your arsenal? 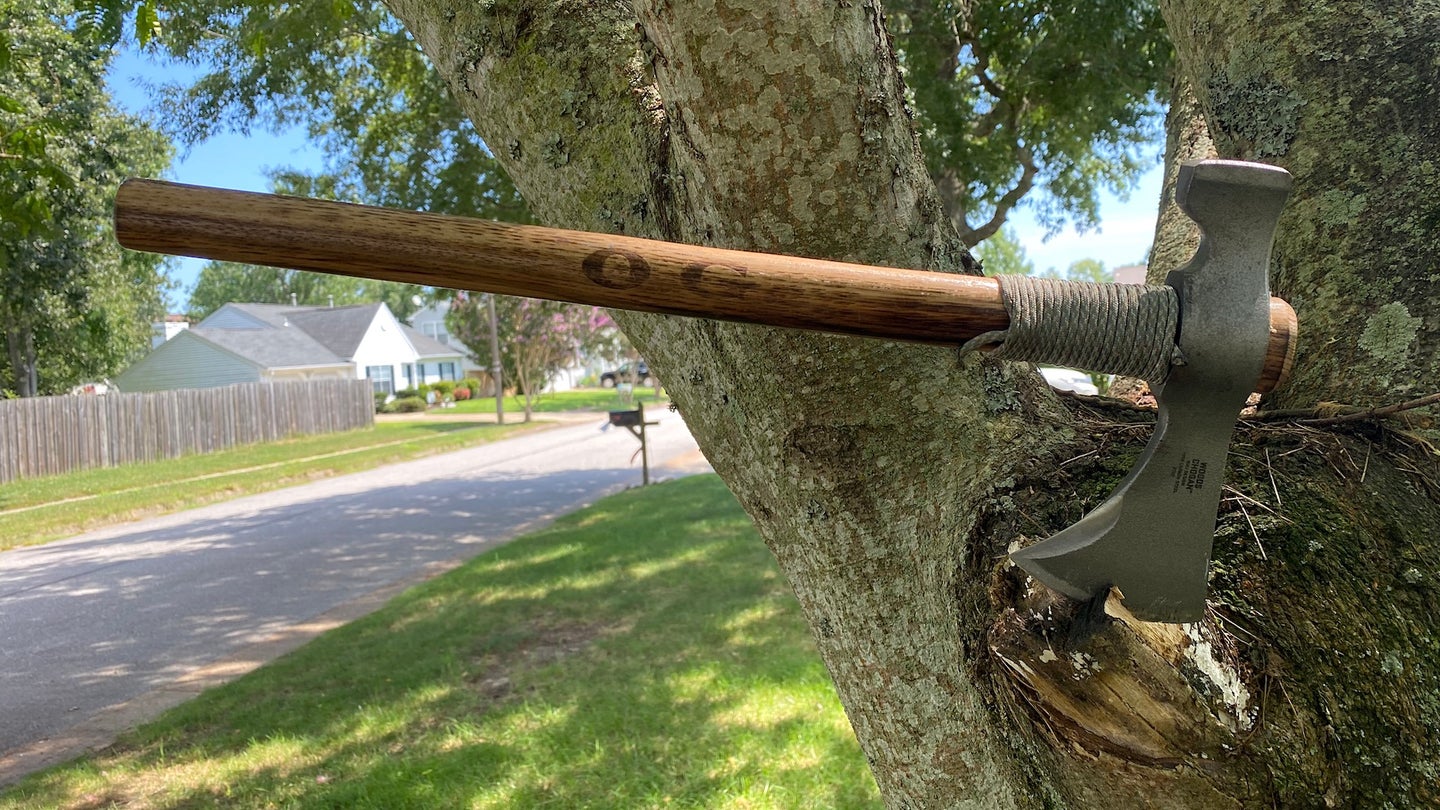 There are few items more essential to adventuring in the great outdoors than a versatile hand-axe, but tomahawks often make better gifts than additions to your outdoor kit. An explosive ordnance disposal dude gifted this CRKT Woods Chogan T-Hawk to me as a groomsman taking part in his wedding. He is a great friend, and I met him when he used to monkey wrench for a racing team in California. Besides consistently maintaining a more cool-dude status than me, he is also the world’s most righteous gift-giver. He went so far as to even laser-etch my nickname “Danimal” and the acronym “OG” into the Tennessee hickory handle. As far as groomsmen gifts go, this was way better than some memorialized shot glasses — kudos to a great friend and hardened warfighter.

I already had two axes in the quiver prior to being given the Woods Chogan T-Hawk. I owned the Hults Bruk Akka Forester’s Axe, which I use for large wood-splitting, and the Collins Hunter’s axe for smaller limbing endeavors. The Chogan is somewhat of an outlier compared to those traditional axes. For one, it’s a freaking tomahawk. Tomahawk history goes back to sharpened stones on sticks via the Native Powhatan tribes of Eastern Virginia. Jamestown settlers blew up their war party in the woods, and they traded up for stronger metal-forged versions. With organic Eastern Shore tobacco the cash crop of the day, many were fashioned with pipes opposite the axe head and the legend goes you were given the choice of war with the axe or peace with the pipe.

The CRKT Wood’s Chogan T-Hawl is fashioned with a straight conical shaft that tapers, meaning it increases in circumference towards the head in order to keep your axe in place—which is a necessity for tomahawk distinction to have a straight handle. It is a tomahawk by definition, and a tool advertised for camping and working outdoors — and at just around $50, this axe is in the middle of the spectrum for tomahawk quality. We decided to review this axe to find out whether this is really a good addition to your field kit or is it just a memorabilia piece sitting on my mantle reminding me of the time I chugged beer and escorted the bagpiper over to the wedding reception as he piped “Scotland the Brave.” Let’s find out, shall we?

I was drunk at a wedding when I unboxed his hawk, but we can talk about its current state. The fine Tennessee hickory handle measures 19 inches, and every shaft differs in color depending on the tree it was milled from, which is a unique characteristic trait for every war hawk. Mine has a dark auburn and black streak growing in intensity to the axe head, contrasting the golden tan colorings.

The tool head is eight inches in width, made of 1055 carbon steel with a cutting edge of 3.5 inches. The secondary bevel, or beard, measures two inches and requires a sharpening out of the box to aid in your next scalping party. My version has a brick-style hammerhead opposite the axe, but a combat style spike version is available to those looking to maim wrongdoers in their next close-combat encounter. The main cutting edge takes a hell of a sharp edge when sharpened, although many online have complained of the lack of a sharp edge upon receipt. However, I am not against taking a file to even a lowly gardener’s spade and have sharpened mine to a deadly edge.

To be classified as a tomahawk, the tool’s shaft must be straight and tapered and lack the curvature you see in a standard axe or hammer handle. These curved parts of the handle are referred to with terms like throat, back and belly and provide support through the swinging and striking when utilizing the tool. Additionally, a tomahawk is generally going to have another tool opposite the sharp axe head.

My friend got us a leather cutting edge sheath adorned with the date of the wedding and an outline of the state of Maine, because apparently, Mainers cannot help themselves to let you know how much better their state is than yours, even in their gifted leather products. The whole ensemble weighs two pounds, but it feels off-kilter due to the warhead at the end of the slim handle. In totality, it is a nice rounded out product that feels like it is worth more than the asking price, and war cries “I’m durable.”

How we tested the CRKT Woods Chogan T-Hawk

For the purposes of this review, I took this bad boy into the backyard for some yard maintenance I had been putting off. My first test was the very official “chop something down” test. There was a dead limb hanging off the large crape myrtle in my front yard. With my freshly sharpened tomahawk, I made fairly quick work of the dying limb. However, it did take considerably more strikes to cut down than my larger and heavier axes. If you had to cut down a large limb, look forward to many strikes and some blisters.

My second test was the feathering test, to look at the sharpness. Feathering is a technique where you slice a stick down in order to get yourself some nice kindling for a fire. This also shows the usefulness of the tomahawk to perform the cutting functions of a knife. The blade of the T-hawk performed well, and its sharpness showed as I was able to trim off some nice kindling that would have made for some great starter for a fire.

My third was the tent stake hammering test. I was shaking out my four-man Kelty Discovery tent anyway, so I grabbed the Woods Chogan to hammer down some stakes into the soft Virginia Beach dirt of my backyard. The hammer on the butt side of the axe accomplished the mission but requires some accuracy. After hammering in two stakes, I was ready to grab a mallet which undoubtedly would have been quicker and easier. I persisted and did stake in the tent and its rainfly. While not as easy to use as a mallet, you have to consider the tomahawk a multitool that lightens your pack by needing fewer tools.

What we like about the CRKT Woods Chogan T-Hawk

Sometimes, you can sacrifice functionality in order to score some points in the looks department, and the Woods Chogan is certainly cool-looking.  She turns heads, and that may be enough to add it to your arsenal. I have never fastened it to a belt, but Tecumseh would nod in approval if you boldly displayed Columbia River Knife and Tool’s tomahawk hip-side. Those upgrades can be purchased on Amazon for around $20.

This brings me to my next point: the T-Hawk is not that expensive. When compared to other tomahawks in the marketplace, you are looking at around a $50 item. The price has fluctuated on Amazon amid various sales over time, but for the standard price, you get a well-made wood splitter that maintains a sharp edge and can do a little hammering on the side for pretty cheap.

The tool is also remarkably light. I would not shy away from strapping it along for an overnight backpacking trip, and I always throw it into the truck when vehicle camping. Weight is definitely going to be a factor if you are choosing to bring the Woods Chogan along on an adventure, and at around two pounds this will not break your back or the bank.

Modern axes and hammers have ruined me, and the slim tapered shaft mentally screws with my hammer strikes. Upon driving some tent stakes home, I yearned for a little curvature in the handle that modern ergonomic engineering provides. Additionally, the T-Hawk has a relatively small hammer head where you would normally search for a mallet in tent-staking pursuits. It will get the job done, but precision is required.

It is very likely that your axe head over time may not stay at the end of the tapered shaft without a little help. The carbon steel heads wear down on the hickory handles and just do not stay in place after three or four uses. My axe requires a 550-cord lashing in order for the head to remain at the end of the shaft. This is probably due to the time I thought it would be a good idea to bushwhack large branches hanging in my neighbor’s yard from the large white oak in my own backyard.

The CRKT Woods Chogan T-Hawk performs aptly for its intended uses of small brush clearing and stake hammering. I did not test it on a live subject, but this axe would kill. However, I would not tackle large tree limbs with the Woods T-Hawk; leave that to the Paul Bunyans of the world. She is a great camp accomplice, but not the solution to big tree problems. Slicing up some campfire logs is fine, but anything larger, seek something heavier. That said, the Woods Chogan is a fine multipurpose field tool that should find its way into your next outdoor adventure.

Q. How much does CRKT’s Woods Chogan Tomahawk cost?

Q. Does CRKT make other tomahawks?

A. Yes, they also make an axe with a spike that can be sharpened, as well as the Nobo Tomahawk which lacks an extra tool and is just an axe.

Q. Are CRKT tomahawks made in the USA?

A. Partly. The handles are made in the USA from Tennessee hickory, and the whole design is by Ryan Johnson of RMJ Tactical in Tennessee. The heads however are pressed in Taiwan.