Review: the Gerber Quadrant is a swing and a miss at the casual knife owner

Gerber advertises the Quadrant as a 'fashion statement with a function.' The appearance isn’t even skin-deep. 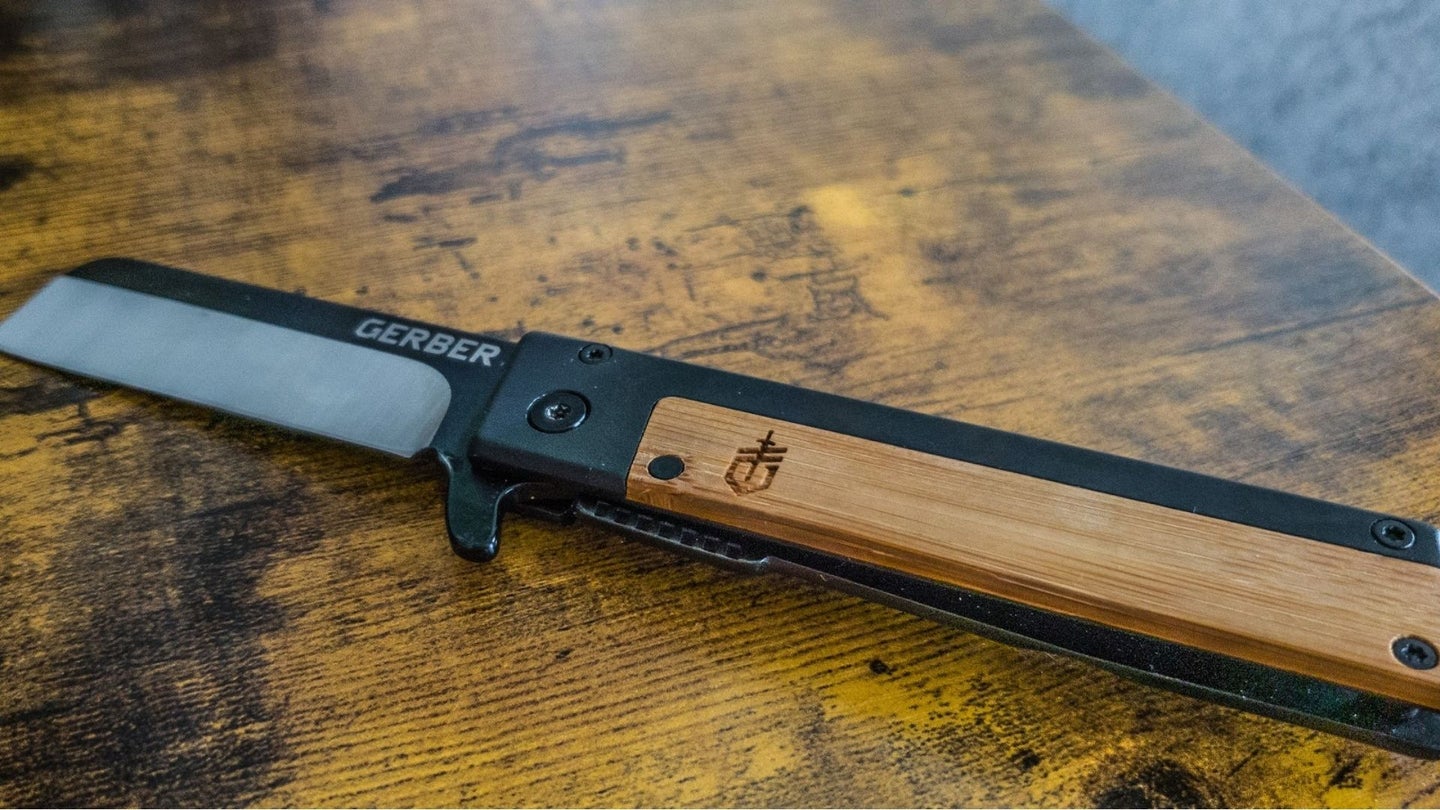 Gerber is one of those brands that’s become a synonym for their product, like Kleenex, Saran Wrap, or Kydex. A “Gerber” has simply come to refer to any multitool in the military vernacular, whether it’s actually made by Gerber or not. Gerber also sells knives, which include the very popular American-made LMF II fixed-blade knives, seen on the equipment of countless American service members. This leads to their claim of being the “largest supplier of knives and multitools to the United States armed forces,” which would explain the use of “Gerber ” as a catch-all for any multitool in a military context.

Unfortunately, Gerber’s quality control on the bulk of their catalog has fallen precipitously, especially at the low end. The better part of their product catalog is now made in China or various other countries, lacking the attention to detail and raw materials required to consistently provide a quality knife that can be relied upon. This lower end includes models like the Paralite, Remix, and the subject of today’s review, the Quadrant. The Quadrant advertises itself as a “fashion statement with a function,” targeting a more image-conscious purchasing base, and focusing on having a striking and unusual appearance. But unfortunately, the appearance isn’t even skin-deep.

As a disclosure, this knife was sent to me free of charge for the purposes of this review, and although that doesn’t affect my objectivity, I do value transparency and integrity.

The Quadrant comes in a simple paper-wrapped blister package, displaying the open knife through the transparent packaging. Additionally, this packaging features a hole in the plastic to allow you to feel the handle material and verify that it is, indeed, real wood. More on the hole later.

The knife itself features a sheepsfoot-style blade, opened via a flipper mechanism, and secured by a framelock. The lock side scale is made of painted metal, and the opposite side features plastic grips with an engraved bamboo panel, featuring the Gerber logo. The main bevel of the blade is plain stainless, with the spine and flat of the blade being painted black. Overall this gives the knife a very modern, urban appearance, which is most accurately described as being in line with the “techwear” style trend.

The appearance presented the first major issue with the knife, which was the cleanliness of the knife itself. I’d hypothesize that the hole in the package allowed dirt and other contaminants in, because the entire blade was coated with some sort of sticky substance. The second major issue followed shortly when I tried to clean the dirt off the knife with Ballistol, a mild solvent that I use on guns and knives regularly. This immediately began stripping the black paint off the knife blade, after which I quickly stopped.

The knife’s “flipper” opening action is stiff and anything but quick to open, requiring considerable wrist motion to fully open the knife on the first try. The factory edge was somewhat sharp, able to shave hair and slice paper with some difficulty. The pocket clip works, probably being the only aspect of this knife that is without any sort of severe shortcoming or quality issue. Overall, this knife utterly failed the “first impressions” stage of the evaluation.

How we tested the Gerber Quadrant

Out of the box, the knife succeeded in shaving hair and slicing paper across the bias, which are two easy metrics to test the factory edge. However, on the paper slicing test, the knife displayed considerable hitching as it passed through, indicating an inconsistent sharpening job. In an effort to correct the issue with the opening action being stiff and requiring considerable effort, I tried to disassemble the knife to clean and lubricate the washers. However, the pivot is a two-part counter-rotating set of Torx bits that prevent easy disassembly, effectively making this knife unserviceable by the user — or at least not worth the effort at the price point.

Frankly, this knife is difficult to use even for the casual everyday tasks that it was intended for. A flipper knife is supposed to be easy to deploy with one hand, which this is not. The lack of a prominent point on the tip of the blade can make it awkward to use for cutting open packages, which is my most common use for a pocket knife. The blade dulls quickly, and even though it’s easy to put an edge back on the blade with ordinary sharpening supplies, the fact that this is near-constant upkeep makes the knife more likely to turn on the user while cutting things like zip-ties , or to even require multiple cuts through materials like tape or sturdy plastic bags, as with the “does it open an MRE bag” test that I seem to subject every knife to. This is a knife more concerned with appearance than function, and the performance reflects accordingly.

The Gerber isn’t an outstandingly bad knife, especially at the price point, and it delivers on the advertised feature of having a striking appearance. The choice of bamboo wood is not only cost-effective but is also sustainable and pliable enough to not dry out and crack easily out of the box, which is a problem with lower-end knives. The sheepsfoot-style blade is also easy to sharpen, having only one angle on its perfectly straight edge. Finally, the choice of using a frame lock over a liner lock is an improvement to durability.

Nearly everything else. The knife doesn’t easily open, is designed to make user servicing difficult, came in the package dirty, and the paint came off of the blade under normal cleaning. Even the argument that the knife does what it needs to at the price point falls through when you consider that you can get much better knives for comparable prices from other companies, often on the same retail sites.

Unless you’re absolutely in love with the look of this knife, this is a pretty solid “avoid” from us. It doesn’t succeed even in the basic functions of a knife of its design, and for the low price that it charges, you can still get better options in this price range from CJRB, Kizer, Kershaw, or Artisan Cutlery.

The fact that a venerable name-brand like Gerber is getting its lunch eaten by low-end Chinese knife manufacturers is shocking when you consider that most Gerber offerings under $75 are made in China. Rather than patronizing a brand that sells Chinese knives under a recognizable brand that’s built on the backs of legitimately good knives of the past century, patronize businesses that don’t try to hide the fact that they’re imported, and that provide good materials at the price point.

FAQs about the Gerber Quadrant

Q. How much does the Gerber Gear Quadrant cost?

A. 7Cr17MoV, or 7Cr for short, is a Chinese stainless steel, meant for the low-end knife market. Its strength is that it has good wear resistance for the price, essentially being a copy of 440A.

A. Depends on the knife. Their American-made offerings generally have better materials and designs, but are priced in a higher bracket, usually over $100. For that price, you’re getting into the territory of brands like Benchmade or Spyderco. Anecdotally, Gerber also struggles with quality control with regard to the evenness of their edge grinds and the quality of their factory edges.

A. Not to my knowledge. However, Gerber baby food is generally of good quality and is good for your children’s health. The same could not be said for this Gerber knife.