Review: From the forges of Scandinavia to your favorite crags, the Petzl Spatha won’t let you down

This purpose-built knife will cut rope, webbing, and cordage with ease. 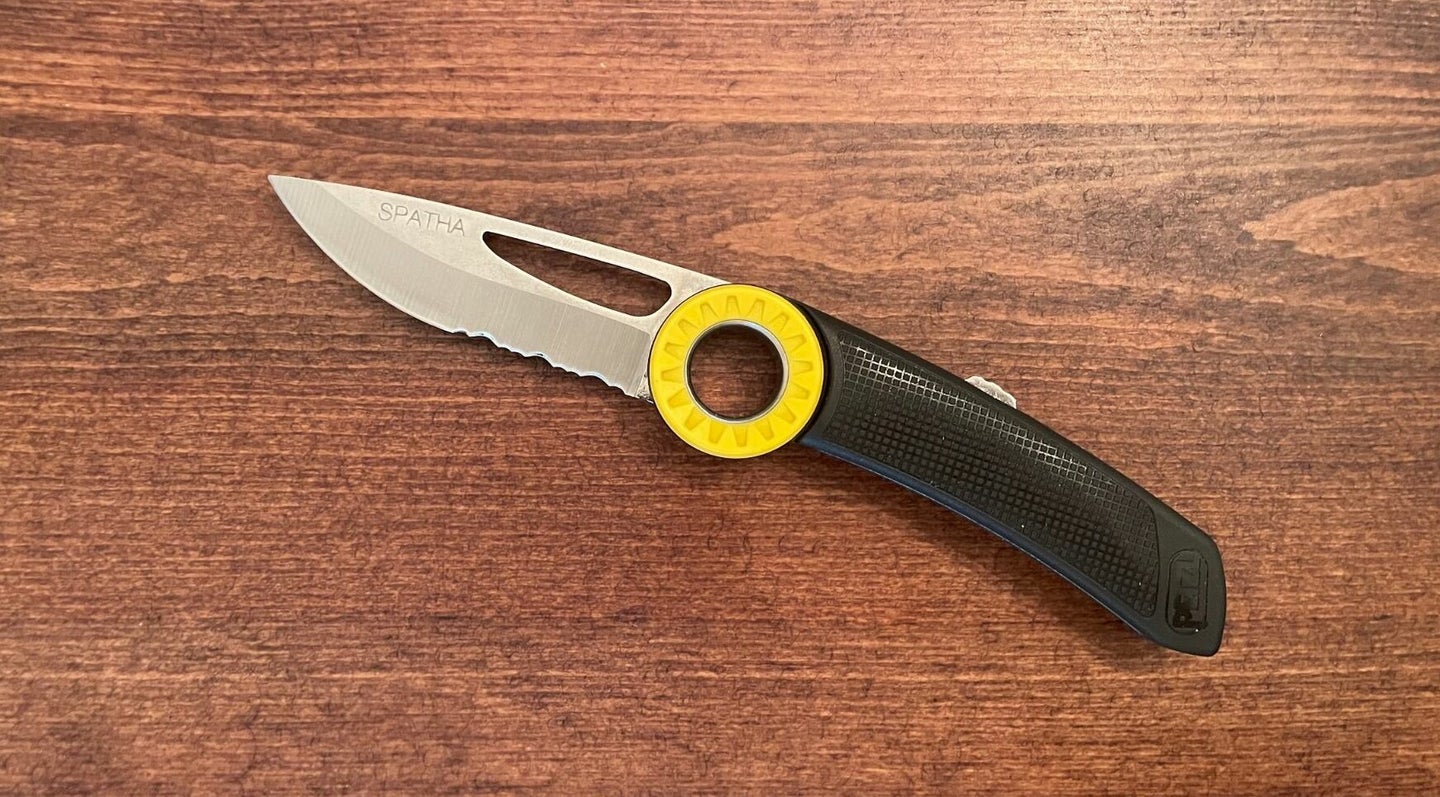 In the world of outdoor backcountry pursuits, there are three tribes that use ropes and rigging techniques regularly — climbers, cavers, and rappellers. To save time and ink, it is helpful to think of these three in Tolkien terms. The climbers, preferring sunshine, beautiful mountains and meadows, and canteens full of spring water, are the elves. The cavers, spending beautiful sunny days in the dark crawling on their bellies through the mud, the muck, and the mire that are the bowels of the Earth, are the dwarves. And the rappellers, who hike to the top of cliffs to avoid hard climbing, only to take the easy way down while telling themselves it’s an adventure, are the hobbits. The climbers and cavers generally eschew each other’s sports, and neither truly understand the odd rappellers. Yet, like the elves, dwarves, and hobbits, all use swords — well, knives actually. And, in this case, we’re talking about the legendary French caving equipment manufacturer Petzl’s ironically named knife, the Spatha.

In Latin, ‘spatha’ means sword, specifically the long, straight double-sided broadsword used by the legionnaires of the Roman Empire from the 1st through 6th centuries AD. The spatha was larger than the gladius all you gladiator history nerds are familiar with, and it is also the progenitor of the Viking sword. (For a wonderful primer on the gladius and spatha, check out Metatron’s analysis here.) Spatha were typically 20 to 40 inches in blade length with a 7-inch handle, so it’s pretty funny that Petzl would name their petite, 2 ⅞-inch bladed, ultralight climbing and caving knife after the big stabby and slashy daddies of yore.

My Petzl Spatha didn’t arrive in a Roman chariot. It wasn’t handed to me by a wing-footed messenger of the emperor. It arrived in a cardboard box via a laconic UPS delivery driver, and was simply affixed to a plain, white sheet of cardstock with minimal decoration or printing. I liked that it didn’t come in an ornate, over-packaged box like so many other knives I’ve purchased or received. These days, I’m trying to send as little waste to the landfill as possible and am hyperconscious about the global problem of single-use plastics polluting our oceans and coastlines. The Spatha did come with a small plastic fastener through the carabiner hole and had a plastic zip tie through the hole in the blade and around the body. The entire packaging setup, like the knife, has a very minimalist vibe.

How we tested the Petzl Spatha

The Petzl Spatha isn’t an everyday carry knife. It was designed for climbing, caving, canyoneering, and kayaking (or even sailing), and it’s primary purpose is to cut rope, cordage, and webbing. It doesn’t have a pocket clip and is intended to be carried attached to a carabiner through an oversized hole at the knife’s pivot point. It was born to live clipped to a climbing harness.

One of the first things I noticed about the Spatha was how light it was, weighing in at a barely noticeable 43 grams (1.5 ounces). Petzl eliminated metal liners from the handle which accounts for much of the saved weight, but at the cost of reduced rigidity in the handle. Additionally, the Spatha has a long teardrop-shaped hole at the top of the blade near the handle that both saves weight and assists with one-handed thumb opening.

The Spatha has a spine-lock that securely snaps into place and is easy to depress to close. This is an improvement on the first generation Spatha which had no locking mechanism.

The 2 ⅞-inch drop point blade is divided evenly with 1.5 inches of serration near the handle and plain-bladed to the tip for cutting away old rigging and more precisely cutting newer ropes, webbing, and cords.

The handles are made of textured nylon, are moderately grippy, and come in blue, black, and yellow. Near the base of the handle, Petzl drilled a small hole should you want to dummy cord it. This should be particularly of interest to Marines.

Perhaps the most interesting part of the knife design is the spin ring. When opening or closing the knife, the entire ring rotates with the blade. This is especially helpful when opening the knife with gloved hands. Ungloved, the blade can be opened fairly easily with one hand by pinching the top of the blade between one’s middle finger and thumb tips. The spin ring is lined with a flanged stainless steel cylinder to provide rigidity and enable the knife to be clipped to a carabiner.

To test the Spatha, I gathered some old climbing ropes and webbing and some new cordage from my basement to see how it would perform.

Test 1: Rope. I have a mess of old jute rope in my garden from last year, so I headed to the wayback to test the Spatha’s cutting ability. The serrated edge made quick work of multiple strands of fibrous rope. The Spatha cut cleanly and effortlessly — like a hot knife through butter.

Test 2: Webbing. I pulled some old, manky one-inch tubular climbing webbing out of a bin in my basement. This stuff was from the 1990s and I’m not sure why I kept it, but I feel safe to say it is representative of the old, tattered layers of webbing you’ll find at the top of most rappel stations at climbing crags. One of the kindest things a climber can do, next to replacing old bolts on sport routes (if you are qualified to do so), is to clear away the jumble of previous seasons’ webbing and replace it with a rap ring and one new, safe strand of strong webbing or cord. Jumbled rappel stations make it very difficult to check the anchor for safety and unnecessarily litter the crags. If you are not 100 percent confident in the existing rappel anchor, always add a new sling or cord that you trust. A good mountaineering rule to follow is: If you add a sling, remove a sling. For more on this, check out the Mountaineers.org advice on rappel and belay stations in the alpine here.

Test 3: Cordage. I tested the Spatha against some BlueWater 7mm accessory cord and an unbranded nylon-core cord I found lying around. The Spatha cut cleanly through both.

Test 4: Snacks. Interestingly, the Spatha had the hardest time cutting through Boar’s Head aged gouda — which was delicious.

Overall, there’s a lot to like about the Petzl Spatha as a value purchase. It’s the lightest 7-inch knife I’ve come across to date. In fact, it has the largest length to weight ratio I’ve found. This is important, because climbing protective gear consists of many hunks of metal in various configurations designed to be placed into cracks in the rock. The nuts, chocks, cams, carabiners, and belay devices all add up, so I appreciate any opportunity to save weight.

The spin ring greatly assists opening the knife with gloved hands and provides a great way to secure the knife to my climbing harness with a carabiner. The blade is held closed by friction alone, and I was unable to open it by shaking. This is a reasonable concern because you wouldn’t want an inadvertently open knife blade hanging out with the quickdraws, cordelettes, and prusiks on your climbing rack.

Petzl used good Scandanavian 12C27 steel in the blade. This is a Sandvik formula that provides superb sharpness, hardness, toughness, and corrosion resistance, and is the same steel they’ve used in ice drills and high-end ice skate blades. So I was pretty happy with the quality vs. cost. The serrated blade made pretty quick work cutting through cordage and webbing, and that’s a plus for clearing away old webbing from rapel stations.

My main observation about the Spatha is that the handle isn’t as ergonomic as it could be for larger hands. For a full-sized blade, I could only get my first three fingers around the handle. The grips have some texture, but the pattern isn’t as aggressive as I’d like. While the spin ring is wonderful for ease of opening with two hands when gloved, the Spatha isn’t as easy to open one-handed ungloved as other knives I’ve used. When climbing, it’s better to have a knife that you can easily operate with one hand.

While the entire knife feels solid when slicing, it’s also a bit flexy when sidewards pressure is applied to the blade. I dig the blade’s steel and edge, but the top of the blade near the handle could benefit from some jimping (grooves cut perpendicular to the blade) to prevent one’s thumb from sliding forward. The knife isn’t open-backed, so it’s harder to clean, which will be a concern to muddy-assed cavers.

Lastly, while the serrated section of the blade efficiently cuts through the webbing and cordage, just keep in mind that serrated blades are much harder to sharpen than plain blades.

For under thirty bucks, the Spatha is a buy. It’s super light, so just clip it to your climbing harness and forget about it until you need it. I still prefer the Spyderco Para Military 2 for EDC, but the Spatha is a good tool for what it’s designed to do. Now I’m thinking of checking out real Roman spathas…

FAQs about the Petzl Spatha

Q. How much does the Petzl Spatha cost?

Q. Does the knife stay closed?

A. Yes, for now. The design relies on friction to stay closed. Over repeated openings and closures, it is conceivable that this friction will be reduced. I’ve researched this, but have not found any instances of failure to stay closed.

Q. Lots of Appalachian Trail backpackers use it. How can you say it isn’t a good EDC knife?

A. The Spatha was purpose-built for cutting cordage. It’s a specialist, not a generalist. While it is light and up to the task it was designed for, there are better options for EDC in my opinion.

Q. How do you sharpen serrated knife blades?

A. Very carefully. Just kidding! Most people use a sharpening rod. Check out this video from Schrade here.