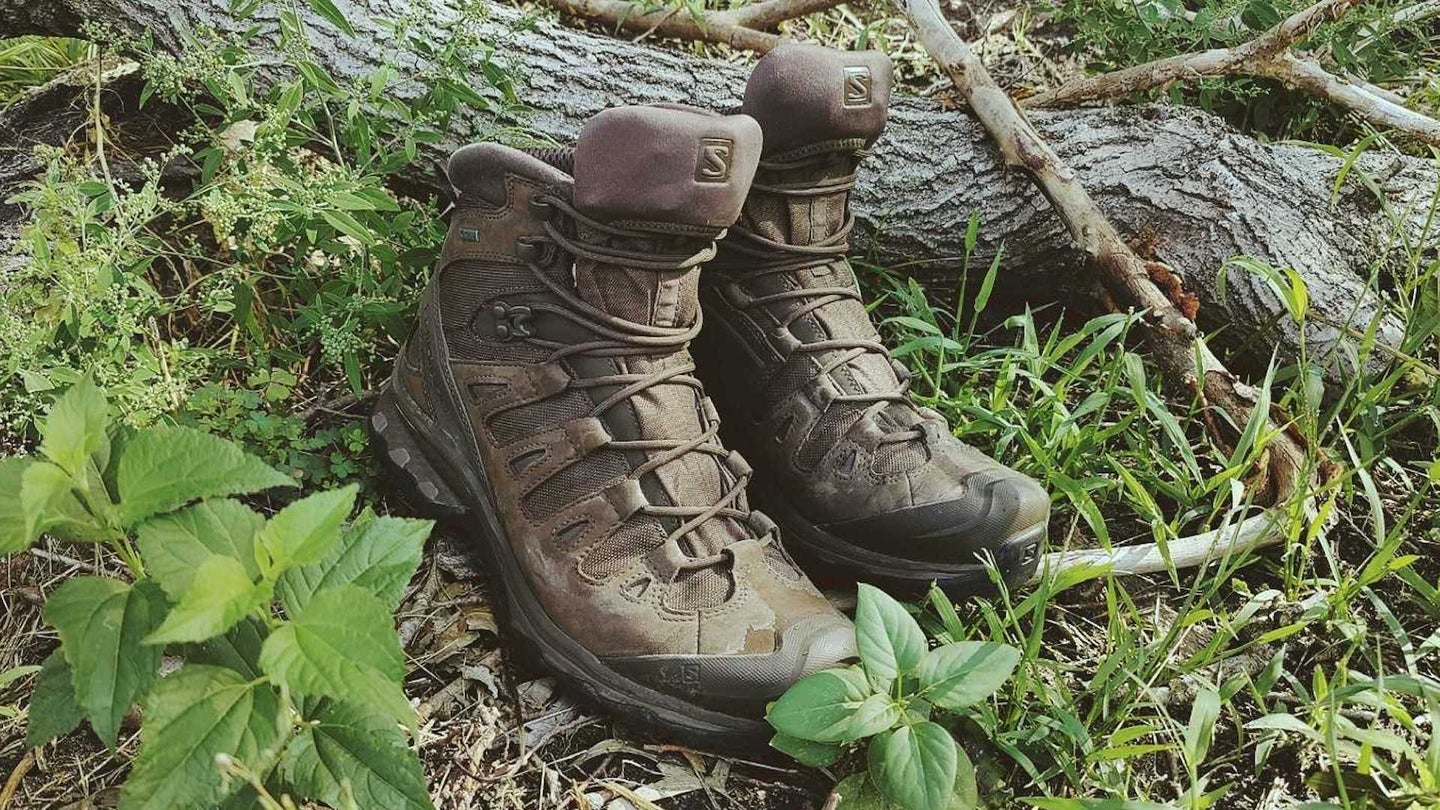 When you need to move fast on rough terrain, for hours, you need lightness, traction, stability, and dry feet. The Salomon Quest 4D GTX Forces 2 EN tactical shoes have you covered on all fronts, with water-resistant materials, aggressive tread on the outsole, and plenty of ankle support.

These are hiking and trail running boots that can tackle trails, brush, and mud. Built with leather uppers, a strong rubber outsole, and Gore-Tex, all sandwiching the Salomon 4D Chassis which provides stability, comfort, and a puncture-resistant sole, these boots are made to last. Lace locks allow you to tighten the foot and ankle sections to different levels, and the heel strap and double-stitched materials ensure a strong boot that should stand the test of time. The SensiFit technology used in the construction ensures there are no hotspots from the inside of the boots on your feet, keeping blisters to a minimum.

With an MSRP of $230, the Salomon Quest 4D GTX Forces 2 EN tactical shoes come at the higher-end price range for U.S. service members and veterans who may be more used to the standard military boot. While more expensive than my beloved Garmont T8 Bifidas, I’ve found myself preferring the Salomon boots every time I needed supportive footwear. These boots are simply better than the heavy, thick-soled boots of years past. Let’s find out why they may be your next boots of choice.

The boots arrived in an unmarked box containing the Salomon box, which is minimalistic at best. The motto “Time to Play” is emblazoned on a brown flip-top cardboard box. Opening the simple box reveals a single sheet of packing material, in which lies the Salomon Quest 4D GTX Forces 2 EN tactical shoes. The lack of fanfare made for a simple opening. One set of tags on the boots, easily removed, and stuffed paper in the toe box, as well as a cardboard tube in the ankle sections, were the extent of the packing material.

I was pleasantly surprised at the weight of the boots themselves upon first lifting them out, having only used heavier combat and winter boots before. At a total weight of 22.5 ounces, or about 640 grams (for those of you not using freedom units), these are light compared to some heavy-duty boots, but heavy for trail boots, according to the internet. I’ve never owned a pair of boots both this light and this rugged before, so I am happy with the weight.

On the first day of testing and wear, I put the boots on simply to test how they fit out of the box. I have a wide foot, but with these boots not having a wide option, I was concerned about the toe box, where most of my issues with normally sized boots arise. I did find them to be a bit tight on the sides of the toe and ball region of my feet, even with some walking.

The solution to this was simple: Soak them in water for an hour. When the leather gets soaked through, it allows more give in the material. I needed to submerge the boots and soak them from the inside, as the water repellant applied from the factory was working too well, and the boots were actually floating in the bathtub for the entirety of the soak. Flipping them over at the half-hour mark allowed both sides of the toe to get wet from the inside. I then put on a pair of crew socks, with a pair of wool socks over top, before getting the Salomons on.

While lacing up the boots, the locking feature allows for different lacing tightnesses for the foot and the ankle and adding more function to the design. These boots utilize a round lace, which doesn’t cause any pressure points on the foot and ankle because of the well-padded tongue.

My three-year-old daughter and I then set out for the local state park trails. Getting to the park meant a drive, and given that I often wear boots while driving around Iowa, I paid extra attention to how it felt to press on the pedals, how much I could feel while doing so, and whether my feet would get caught up on the pedal edges. These boots weren’t tennis shoes, but I didn’t once catch the edge of the sole on the pedal I wasn’t trying to press, even when I tested this later on in my manual transmission car. I also could feel the pedals fairly well, relative to a thicker boot like the Garmont T8 Bifida, which insulates the feet from the pedals to a degree.

Moving on into the trail section, we went down a steep dirt hill with fairly packed soil, and these boots had good traction, biting into the ground as we went along. I carried a pack, maybe 25 pounds, with the things required for a little one, like spare clothes, rain gear and sweatshirts, binoculars and a medical kit, plus water and food, and with some sections requiring I carry her, these boots held me tight to the ground. I felt very sure-footed wearing these, even on the inclines. As it turns out, Iowa isn’t all flat; that would be Kansas you’re thinking of.

We stopped at the end of the trail to eat lunch, and I realized that my feet didn’t hurt, having moved for about forty-five minutes so far, and with some lower leg injuries, this is usually quite a bit more difficult for me. Bear in mind, I was wearing two pairs of socks in new boots. Normally, even with a soak, the break-in period can be a bit difficult on the feet while the leather stretches, and the arches of my feet are usually sore as well. These things didn’t happen with these Salomons. We turned around, and I ended up carrying Tiny most of the way up to the road where we parked and drove home.

I let the boots dry out overnight, with the inserts taken out, then put them on the next day to test how they fitted themselves during the previous day. A normal pair of crew socks, and these boots are a perfect fit for me. They aren’t loose anywhere that I can feel, and they aren’t tight on the toe box any longer, either. I put some water in the bathtub again and stepped in. Still water-proofed, and my socks were dry afterward. These boots use a semi-permeable membrane to help keep water out along with the repellant, while still allowing airflow to the foot.

Needing to drive to an appointment, I wore these boots again to see how they’d feel in my car (with the manual transmission), and whether the edges would catch pedals. While I couldn’t feel quite as much as when wearing shoes, these are easily the best boots I’ve had for tactile feedback from the car. I think boots, especially, should be multi-purpose, and one needs to be able to get around comfortably in them, regardless of whether that is in a vehicle or on foot — these fit the bill.

The construction quality of the Salomon Quest 4D GTX Forces 2 EN tactical shoes is well above what I have used before, including a pair of Rocky boots as well as Garmont T8 Bifidas, which were my go-to boots to this point. They are comfortable, lightweight, and provide awesome traction on all surfaces. The lace locks work well, and the ability to tuck the tied laces into the upper part of the tongue means not having them yanked loose by brush.

These provide superb ankle support, without feeling restrictive, and the 4D chassis built into the sole keeps aches in the foot to a minimum. The toe is well-protected as well, with a thick rubber toe covering, as is the heel.

Finally, the laces are easier to adjust when putting these boots on than those with flat laces, which I find more difficult to grasp than the round laces included with the Salomons, making tightening and loosening a much easier affair.

While I was able to force the toe box outward to accommodate my wide feet with a wet break-in, these boots did not fit perfectly out of the box, unlike some modern hiking boots which come in wide sizes. The break-in period was not terribly long, given my method, but it definitely needed to happen. I would have liked to have seen these in a wide sizing from the manufacturer.

Another issue, and from what I can tell, one of the main differences from the Salomon Forces Quest 4D GTX 3 is the different insole, which is apparently more comfortable in the 3 version, and more lightweight in the 2 version. I believe this difference, along with the different lug pattern, to be evidence for these boots being made more for trail running and lighter hikes than the GTX 3s. For more information about the 3 version, check out Joe Plenzler’s review here.

I did find online that some folks had issues with the outsole separating from the main body of the boots, and as far as I can tell, these outsoles are glued on, and not stitched. I haven’t had this issue myself, but I will definitely be watching to see if that should occur to mine.

The last issue, and perhaps the largest obstacle to the layman wanting a pair of these boots, is the price. At over $200, these aren’t cheap footwear, and while that money does go toward a very well-made, durable, and lightweight pair of boots, the price relative to many other options available may keep some buyers from obtaining a pair of these on a whim. I would recommend that you look for a sale on these, if possible.

The Salomon Quest 4D GTX Forces 2 EN tactical shoes are a superb pair of boots. I will definitely continue to wear them, beat them up, and see if they stand the test of time and Iowa winters. I would not recommend these to someone needing just a pair of work boots, but if you require that extra little bit of help with your trail running, backpacking adventures, or survival training, these are absolutely the boots for you.

Q. How much do the Salomon Quest 4D GTX Forces 2 ENs cost?

A. Incredibly so. I had to physically put them underwater in order to soak the leather for the break-in period. These will keep your feet dry in up to nearly six inches of water.

Q. What sizes do the Salomon Quest 4D GTX Forces 2 ENs come in?

A. These are available in sizes from Men’s 4 to Men’s 15, though wide sizes are more difficult to come by, were not in stock when purchased, and I haven’t seen them stocked since.

A. They are available in wide, when in stock, for sizes 6 through 11, but again, can be difficult to come across.