Review: the Schrade Frontier is a knife to tame the wilderness

Survival knife fundamentals are front and center with the Frontier. 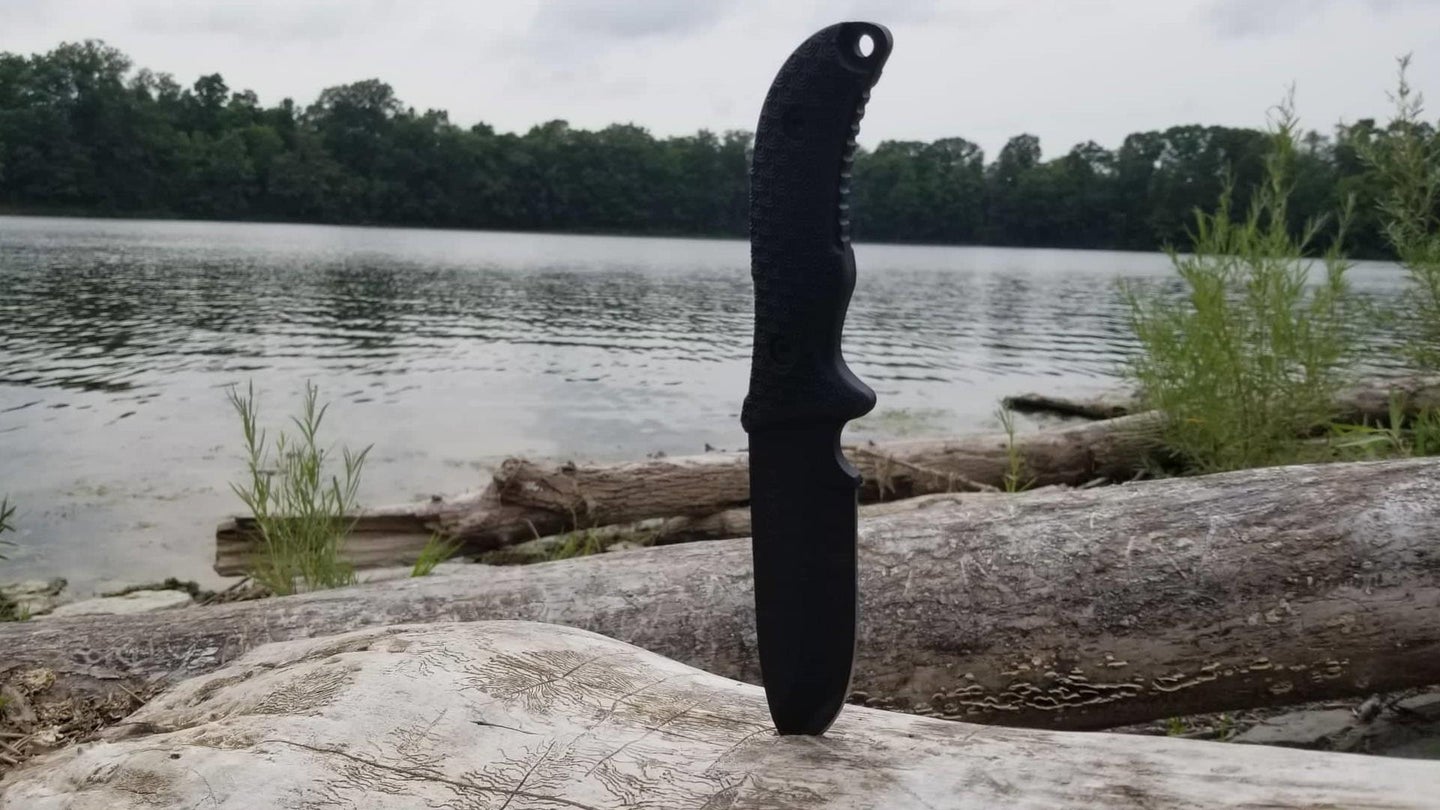 I’ve got a few too many stories about the consequences of buying cheap kit. Like countless other U.S. military veterans who have deployed overseas — or anyone who has simply spent a lot of time hiking and camping in the great outdoors — I’ve learned a few times that trying to save a few dollars on your gear will often result in frustration and tears. So many tears.

When it comes to survival knives, it’s easy to see the price climb above $100. That sets up a nasty conflict: Not everyone wants to sink that kind of money into a knife (well, we want to, but either the frugal side of the brain or the voice of your less-knife-enthralled spouse makes it hard to actually buy it). But if you’ve had the bad experiences I’ve had with cheap gear failing at the worst times, you’re probably none too eager to consider lower-priced survival knife alternatives. What to do?

Let’s start with the fact that there can be a difference between “cheaply made” and “less expensive.” With a knife (and I suppose with other tools as well), it can perform great with less costly materials if it’s crafted well. The question is, who can you trust to make a less expensive survival knife? Say, one less than $50? I’m hopeful that this question was just answered for me because a week or so ago I found a large package waiting on my doorstep. It was a mid-sized, fixed blade knife from Schrade, and at less than $35, it didn’t break the bank to get it.

I’m a little hopeful here because Schrade has been making knives since the late 1800s. They’ve got a solid reputation, even after the company went belly-up, was purchased in 2004 by Taylor Brands, LLC, and their production moved to China. Even today they offer a wide range of popular knives, some high-end and some not so much. So with this mix of trepidation and hope, I took a look at the Schrade Frontier.

I’ll admit, the unboxing was surprisingly exciting. The bright green and grey box was over a foot long and three and a half inches wide. Within it, the black knife and sheath stood out impressively from the white interior of the box. At the very least, Schrade knows how to package their knives.

Before I get too far, a quick note: Schrade actually sells two versions of this knife. The one that I’m testing, the SCHF36, is kind of a base model. It’s made of 1095 high carbon stainless steel which, although it isn’t top-of-the-line steel, is known to be tough and resists chipping (a valuable attribute for a survival knife). The SCHF36 comes with a ring-textured TPE (thermoplastic elastomer) handle, which is a composite material that provides slip resistance. The more expensive version of this knife, the SCHF36M, is made from the somewhat more durable 8Cr13MoV stainless steel and also has a higher-end micarta handle. It can also cost almost twice as much.

Now, back to the one in my hands. The Frontier is a full tang, 10.4-inch survival knife, and five inches of that is the blade. At 6mm thick, it has a nice weight to it, coming in at 13.25 ounces according to my scale. It feels like it was made to handle some pretty hefty cutting duty. The blade has a finger choil for forward finger grip. The first time I lifted this blade, I think my eyes sparkled. It felt like a knife that could do some damage. The good kind of damage.

The knife comes with a couple of extra goodies. First, the sheath is black polyester. It’s made to be simple but useful. It has a Velcro loop to easily attach to a belt, and on the outside is a pocket that holds a sharpening stone and a small ferro rod with a striker for starting fires. I have to admit, this is a nice bundle of kit for under $35. But the question is: Is it any good?

How we test the Schrade Frontier

The first thing I did was run this knife through the “cut a sheet of paper” test. It did well, slicing easily down about four inches of a single sheet before it started to tear. Considering my skepticism of possible low-end knife quality, this was pretty good. But this is just the traditional opening ceremony of knife testing (sorry, I still have the Olympics on my brain. USA!). Time for more challenging hurdles.

With this being a Schrade survival knife, I had to get out into some country and run it through some outdoor rigors. I strapped the sheath to my belt and took it on a hike through a nearby Caesar Creek State Park, merily cutting and hacking at anything I could without being a jerk: Dead logs and stalks of milkweed were my most common targets. Thick vegetation wasn’t an issue, but branches took a little work.

My hikes lately have been relatively comfortable affairs, but I wanted to see how well I could use this knife with sweaty hands and a wet handle. The TPE material is not only textured to help prevent slipping, but it also has grip jimping along the back (those notches you sometimes see on the back of knife handles). So I got the handle wet and then proceeded to whittle down a piece of old pine. Eventually, I felt a little hot spot at the base of my thumb as the handle dug into my skin. Frankly, this is probably more a statement about my soft hands than about the design of the handle. I need more knife time to toughen up.

Throughout my hike, the sheath wore well, meaning it wasn’t particularly comfortable or uncomfortable. From the tip of the knife end to the bottom of the sheath, the overall length on the thigh is about 12.5 inches, so I was well aware it was there throughout the hike. Don’t wear it while you’re driving, though, unless you want your knife handle jammed into your hip.

I’m not much of a hunter, so I improvised as best I could to test the knife on game. The Frontier easily sliced through a rotisserie chicken, bones and all. Thick cuts of meat, potatoes, and corn cobs were no match for it either. It’s been a while since I’ve used a heavy blade like this, so I was impressed with the ease it cut through meats and thick veggies. It’s clearly capable of more than I threw at it.

I eventually turned my attention to the accoutrements. First up, the ferro rod and small striker. It’s been really dry in this stretch of southern Ohio lately, and I was a little leary of testing the ferro rod out in the wilderness. I had no urge to join the ranks of sloppy campers or gender reveal parties gone wild that end up setting half a state ablaze. But I did find some patio and gave the rod a go. The small striker is a bit annoying, but once I found my rhythm, the sparks started flying. So that’s a nice addition for a survival knife.

The sharpening stone works admirably well. After a few days, I gave the blade a quick touch-up and wiped out a small burr I noticed. It was easy to do, and I’m not the best blade sharpener in the world.

The knife looks great and feels solid. For a survival knife, it delivers on everything I’d hoped for. For the price, it feels like a lot of attention went into the fundamentals: The blade is sharp, the heft is satisfying, and the handle is comfortable to hold. It’s capable enough to cut through most of the challenges you’re likely to face on long hikes or camping trips, but not so big it’ll be a burden if you’re carrying it on your side (instead of lugging it around in your backpack).

A few days into testing, and already the black powder coating has a small chip in it. This is to be expected over time, and maybe I was a little aggressive with my testing over the past week or so. But I wasn’t striking rocks or non-organic surfaces, so that little chip was a surprise. With regular care of the blade, I don’t think this is a problem, but still.

The sheath has no frills. It gets a few points for looks, but I wasn’t overly impressed with the quality. The black polyester will probably last awhile, but while wearing it I often had to fight with it to get the knife to slide into the inner plastic liner for it to sit just right so that I could snap the top safety tab closed.

The SCHF36 is a knife worthy of being in your kit. As my knife inventory grows, I’m getting to the point where I have to pick and choose which ones I need for hiking, camping, kayaking, and whatever else I can get into this year. I think that the Frontier is going to join me on most of these adventures. I can’t say that all of my suspicions of lower-end survival knives have been banished, but the Frontier seems tough and was clearly made by folks who know their business.

A lot of folks (myself included) like to zero in on the type of steel used to make a knife. Despite being slightly softer than many others, 1095 is commonly used in survival knives since the relative thickness makes for a durable tool that is easy to sharpen. However, on its own, 1095 is prone to corrosion, so it’s good to note that the Frontier is powder-coated, which helps to protect against corrosion and gives the blade that impressive black color. This doesn’t mean you can skip cleaning your blade like any other knife, but it’s comforting to know that Schrade puts this extra level of protection into their product.

FAQs about the Schrade Frontier

Q. How much does the Schrade Frontier cost?

A. You can find this knife for just under $35 on Amazon.

A. It depends on what you use it for. As a softer steel, it’s not the best for small knives. But for thicker blades, 1095 steel is used frequently. It’s fairly easy to sharpen, just be sure to properly care for the blade (keep it clean, oil it, and sharpen it when needed).

Q. Are there any other versions of the Schrade Frontier?

A. Yes. Schrade makes a few other full tang Frontier survival knives that look similar but are of varying lengths, different handles, and in some cases different coatings on the blade. Examples are the SCHF37 Frontier 12.4-inch knife, and the SCHF52 and SCHF52M 13-inch versions.

W.E. Linde spent 12 years in the Air Force as an intelligence guy and loved both his enlisted and commissioned time. Now a civilian, he toils away as a healthcare business analyst by day and wannabe writer by night because who needs sleep when you have coffee? His time in the military made him appreciate just how funny the term “military grade” can be. He currently writes for Duffel Blog and for the humor site Damperthree.com