Meet the real gears of war. 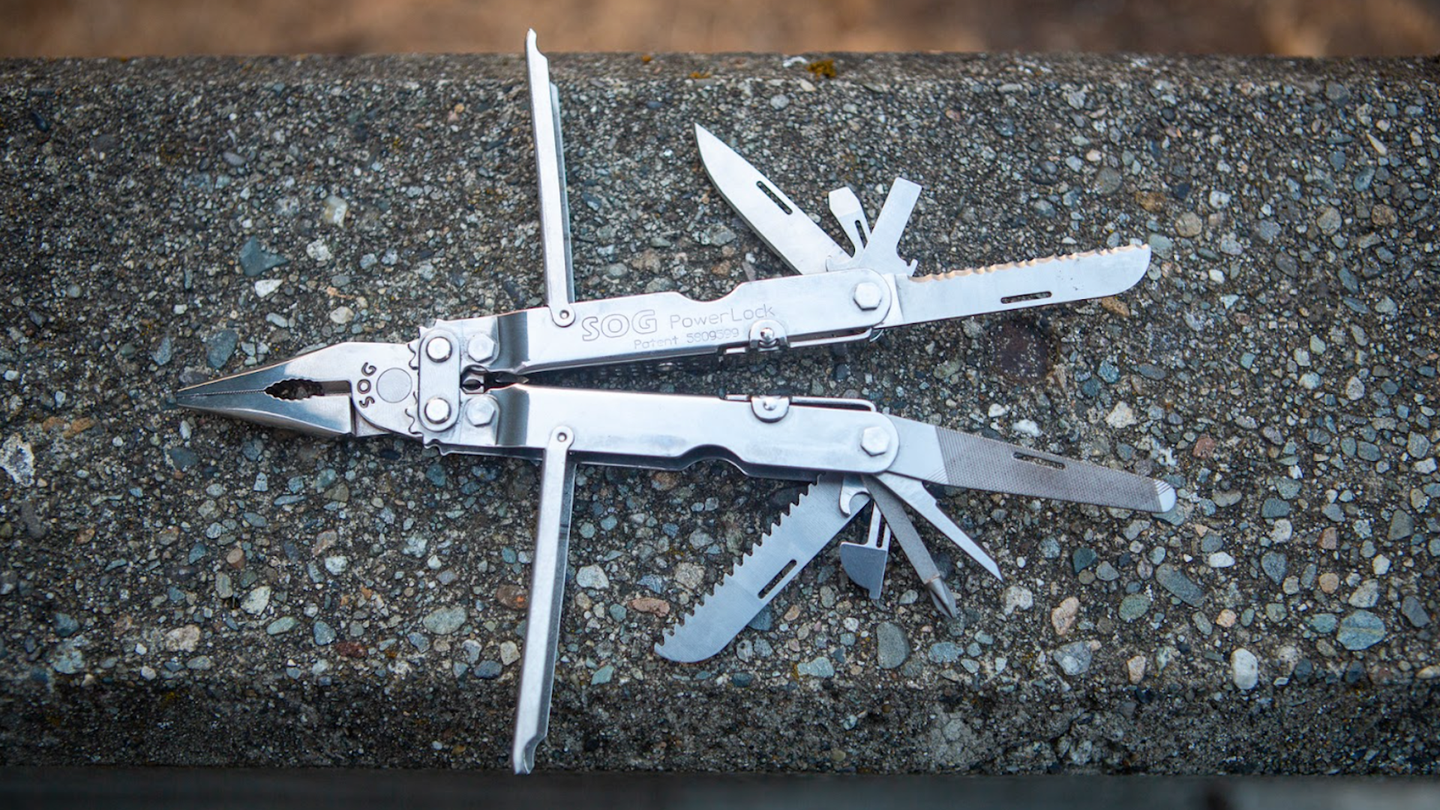 My experience with multitools hasn’t always been positive. As a C-17 loadmaster, I used them almost every day during my military service. I bought a Gerber multitool while I was in training way back in 2003, and I never liked it much. I carried that tool and used it daily for more than a year and it was a rattly thing made cheaply. It didn’t do anything particularly well, and some of the attachments were beyond useless. Have you ever tried to use the Phillips screwdriver on a multitool? They’re almost always frustrating to use because the tips are off-center, the handle is an ungainly rectangle, and the tips get chewed up because they’re generally not made from the right kind of metal. On top of that, the Gerber had plastic locks and circlips holding everything, and the plier head retracted into the tool body with some buttons. I was young, $35 wasn’t the end of the world, and I needed something to get through training. Sometimes convenience is the driving factor.

I’ve never really been a fan of multitools because a good knife will do nearly everything you need from a multitool and probably won’t break. Add a small screwdriver, a bottle opener, a pair of pliers, and a cable saw to your kit, and you probably won’t ever need a multitool. But multitools also have a fatal flaw: the bits and attachments are mounted on a bar or rod, and when you use them, you’re putting massive amounts of torque (twisting force) on a very small surface area. Over time, the holes in the attachments that the bar runs through enlarge from use. They bend and twist and break at the worst time. Think about that: When you’re stressed out and it’s an emergency, and you’re trying to pry up that panel to remove a screw, you’re putting the most force you can muster into doing it. Something has to give, and most of the time it’s not the panel, but your multitool that will bend or break. My cheap Gerber sucked.

When I hit my first squadron assignment in 2004, I was issued a Leatherman Wave tool and it was just a different class of tool from the Gerber. It was smaller, had a much better case, was all metal, and didn’t rattle at all. It had tolerances that were more tool-like. It should have, because the Wave was more than twice the price of the Gerber at $80. Gerber still makes a version of the multitool I carried and cussed at —the MP600 — and it’ll now run you around $70 shipped. Leatherman has a new version of the tool I carried, now called the Wave+. They’re around $110 shipped.

That’s where the SOG Powerlock came in. I flew with the Wave for about six months of OJT before Uncle Sugar started dropping gear on me. I still have the Bianchi shoulder holster I was issued then, my flight bag and Oregon Aero modded headset and the PowerLock. At just over $70, the PowerLock fits neatly between my old Gerber and Wave in price but has a feature that literally crushes the competition. While none of these products are “cheap,” you definitely get what you pay for, and spending a little extra can net you big results, especially when you’re in the middle of nowhere relying on the tool to make or break your day.

The rest of my Gucci gear is lost to time and all of the cross-country moves I’ve had since then, but the SOG PowerLock was a standout and didn’t get lost in the shuffle. It’s that good.

SOG is a unique company. Founded in 1986 by designer Spencer Frazer, it set out to make replicas of the bowie knives issued to and used by a classified unit in Vietnam — the Military Assistance Command, Vietnam-Studies and Observations Group, or MACV-SOG. MACV-SOG remained a secret during the war in Vietnam. SOG found its way into popular culture when Francis Ford Coppola made a movie based on Joseph Conrad’s Heart of Darkness and set it during the Vietnam War. That movie was Apocalypse Now. Yeah, that’s where the SOG tool gets its name.

My SOG tool came in a plain cardboard box. It was nothing special. It’s what’s on the inside that counts, which happens to be the excuse I make when my waistband starts getting tight. This Powerlock came in a leather belt pouch, although SOG ships new ones today in a nylon version.

The first thing you notice when holding the SOG Powerlock is the heft. It feels like it’s made out of solid steel, which it practically is. The only plastic you’ll find are three plastic spacer rings. The rest of the multitool is stainless steel. It’s a very good sign.

You’ll notice something is strange when you try to open the PowerLock. It doesn’t swing open, it’s geared. The gears are what I love most about the PowerLock. They’re the closing mechanism and a force multiplier for the pliers. The plier jaws are full-sized, which is a rarity in multitools.

The other tools in the PowerLock’s arsenal are two knives, one serrated and one plain, a file, an awl, a Phillips #1 bit, a can opener, a wood saw, a bottle opener, a pry tool, a flathead screwdriver, and a ruler.

How we tested SOG PowerLock

My PowerLock has been with me for the better part of two decades, since I was an Airman First Class, and has been around the world on U.S. military aircraft several times. I used it as a student, an instructor, as an armorer, as a loadmaster, and now as a crusty, angry veteran.I used it to tame wild straps, cut boxcar seals, mangle zip ties, kill bugs, cut food, open cans, twist safety wire, saw wood for kindling, open so many beers. The list goes on forever. The thing still looks (mostly) brand new.

More recently, it accompanied my Coast G20 to Alaska on a 5,000-mile road rally. It nearly killed me when I had to check it (and my carry-on) because it had a sharp-ass knife in it. I had to decide whether to keep it in Gomi (the plucky shitbox that survived the Alcan 5000 Rally with me behind the wheel) and hazard the return barge sinking or take it and risk the airline losing it. Always bet against whatever travels by sea.

SOG’s PowerLock is better than half of the regular pliers I’ve used in my life. The gearing makes you feel like superman, just clamping right through stuff. You can literally shape metal using the gearing to crush and destroy. Considering I trimmed pieces of sheet metal with them at one point, they’ll chew straight through metal. Whatever you need to hold on to, you can do it with the PowerLock’s geared pliers. There’s a file attachment, so you can even deburr after you cut.

One of the things I’m most into on a multitool (besides the quality of the pliers) is the saw. For me, the saw is what you don’t easily get to carry around. If you have a little extra room, you can grab a decent survival knife like a Mora and an extra pair of your favorite pliers, but you’re probably not packing a full-sized saw. Saws are really handy to have around though, and if you need to make a quick shelter or do anything else that requires cutting lots of small tree branches, a saw is 100 times better than a knife. The PowerLock’s saw is great, with big alternating teeth that stay sharp.

I usually had another knife on me, but SOG’s knife attachment came in handy more often than I thought. If I already had the PowerLock out, it was faster to pull the blade than it was to close the tool and reach for another knife. It stays sharp too, and has a useful length.

It’s usually the knife that gets rounded out or loose first, because that’s the tool we tend to use most and with the most force. That hasn’t happened on my SOG tool yet, and at this rate, it may never happen. The lock mechanism where the tool gets its name is great. The lock is solid but easy to operate with one hand, which is important for most EDC gear, whether it’s a knife, flashlight, or multitool.

My only real gripe about the SOG Powerlock is that it’s still a multitool and therefore is limited in its functionality by design. Using the screwdriver is still awkward and I’d rather have better versions of the individual tools. When that’s not possible, like when I’m away from home, the PowerLock is the best substitute.

There are also a couple of sharp angles on the handle that can be uncomfortable by plier standards, but then again, these aren’t pliers. It’s a SOG tool.

The PowerLock is my gold standard for multitools so far that I compare every other multitool I’ve used to it. Some of the others have better individual tools, or a novel locking mechanism, or they’re half the size or weight. Some have cooler storage options or better one-handed operation. Some even have better pliers or a more comfortable grip. What the others lack is having the total package combined with proven longevity.

The PowerLock is a great all-rounder. It does everything well enough that you don’t miss the real thing four out of five times. Then there’s durability. Mine is as solid as the day I got it, and plenty of others feel the same. You’ll only need a new one if you lose yours — and you won’t, because you’ll love it enough to make it a family heirloom.

FAQs about the SOG PowerLock

Q. How much does the SOG PowerLock cost?

A. I’ve been lucky enough to never see the receipt for my pair, but you can get your mitts on your own for about $71 shipped.

Q. What’s the warranty on the SOG PowerLock?

A. SOG is famous for their warranty services — there’s a limited lifetime warranty on the PowerLock and SOG will repair or replace your tools if it looks like you’ve been taking care of it.

Q. Is the SOG PowerLock made in the USA?

A. SOG’s PowerLock is made in the USA, and SOG’s headquarters is a little more than an hour from Joint Base Lewis McChord in Washington State.