Review: the Spyderco Endura 4 is all business, all the time 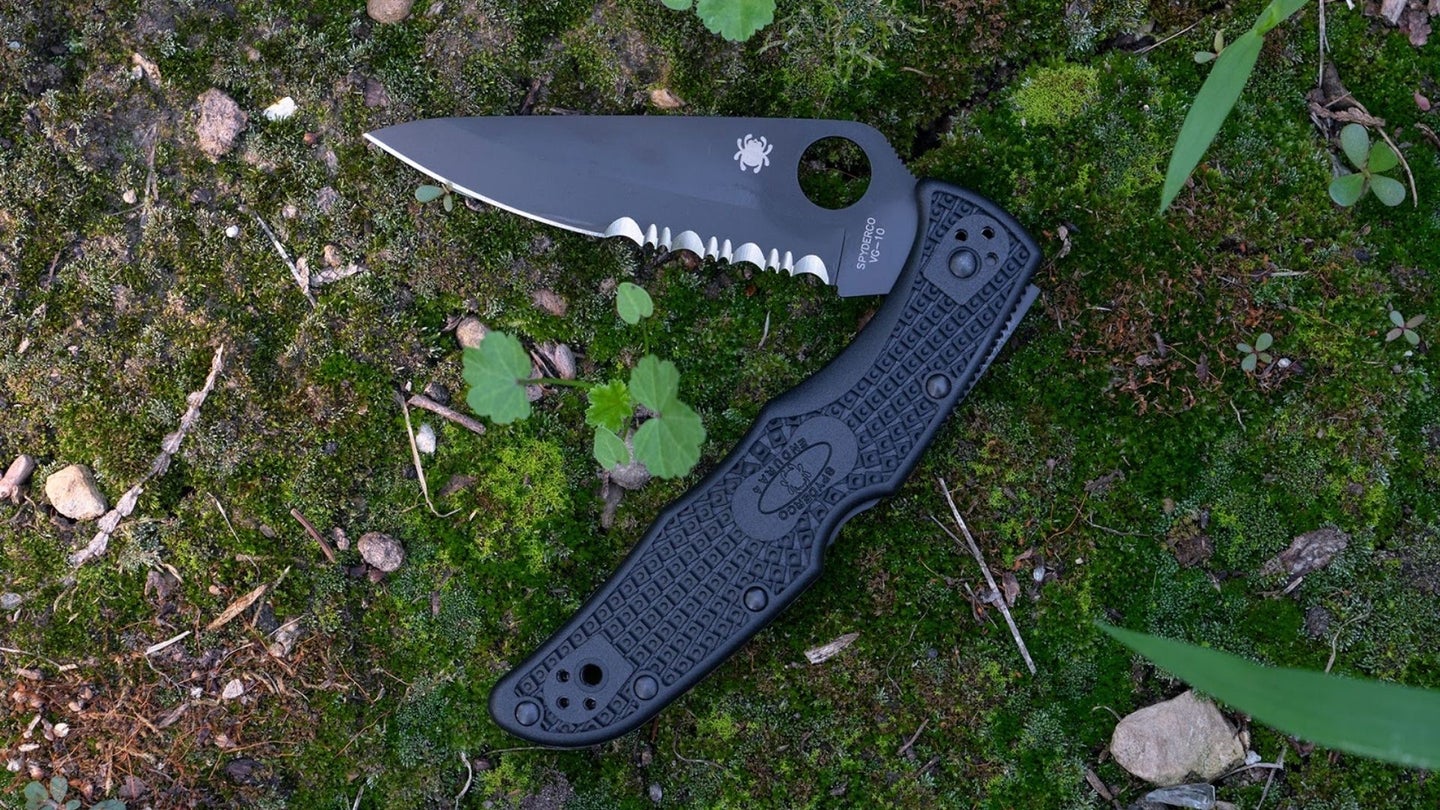 We ask a lot of our gear, EDC knives in particular. The blade you carry every day needs to be worthy of your trust and perform a complicated balancing act to keep all your priorities in check. That’s why the segment is so damn crowded––we all want different things from our knives and the ideal EDC looks different to everyone.

The Task & Purpose crew has smoked out plenty of worthy candidates for those who want something affordable, classy, or traditional. Of course, we have a long list of tactical options we can recommend, too. Some of you don’t care about any of that. Some of you just want a knife that does its job, takes a beating and doesn’t give a shit about anything else (if shits are something a knife can give). I can appreciate that. As much as I love a hand-crafted piece of equipment, sometimes you just need a workhorse. If all this sounds like I’m talking directly to you, the rest of this article will be music to your ears.

As a brand, Spyderco has done a nice job of offering a diverse range of products without cutting corners to sell more units. Each knife in the lineup is aimed at satisfying a particular need (like being absolutely gorgeous, in the case of the Chaparral in Birds Eye Maple), and the Spyderco Endura 4 that found its way to my doorstep is no different. It’s a tactically-minded knife that can take a licking and keep on ticking. Spyderco claims this lightweight folder has a lineage that speaks for itself, but I’m not one for sitting on laurels so I was curious to find out if the young buck really is as tough as his old man.

After removing the Endura 4 from its box, I stared at it in my hand for a few minutes trying to figure it out. The first thing I noticed was how light it felt (3.6 ounces, for the record). Almost too light, with a suspiciously plastic feel, which didn’t seem right after hearing so many people rave about the Japanese brand. The shape of the blade was quite a departure from most of the knives I’ve carried and seen, too. It reminded me of something out of Jurassic Park.

Also in the box was a booklet that broke down the history of the Endura line, so maybe Spyderco could set the record straight. And that’s exactly what happened: As it turns out, that grip isn’t plastic, but fiberglass-reinforced nylon with a better strength-to-weight ratio than aircraft-grade aluminum. It’s also scalloped in different directions to provide excellent grip regardless of whether you’re pushing or pulling the blade. And that shape? It’s not just for looking cool in the display case at your local sporting goods store. That shape is built to work.

Kudos to Spyderco for including a pamphlet with more than legal ramblings. Their website is helpful, too. The Edge-U-Cation section (oh yes, they have dad jokes) includes a glossary so you know they aren’t trying to confuse you with a bunch of marketing buzzwords, and a steel chart to help you make sense of all those alphanumeric codes. Want even more answers? Hit up the Spydiewiki for all the crowdsourced Spyderco knowledge you can handle (why, yes I would like to learn more about the company’s SKU system).

How we tested the Spyderco Endura 4

As with all the gear I get to knock around for you guys, I carried the Spyderco Endura 4 as part of my EDC for about a week. I clipped it to my hip pocket in jeans and shorts, and found a few creative ways to mount it to an assault pack’s MOLLE system (although you should be aware that it doesn’t come with a case). The clip is very secure, but its shape causes the knife to flop around in some circumstances.

Since the Endura 4 is built to be tactical, I wanted to give it a dose of natural and man-made cutting challenges. First up, plain old wood. If a blade can’t whittle a stick into a primitive tool or fire-starting tinder (no, not that kind), I have no use for it. Not surprisingly, the Endura 4 sliced through green and dry wood like it was made of brie cheese.

Next up were plastic yard barriers. Again, not an issue. On to thicker Tupperware-style plastic containers, then. This time, the plastic was brittle and snapped as soon as I applied pressure with the blade. All things considered, I wouldn’t have any doubts about using this knife in a kinetic environment that might involve things like zip ties and light wiring.

The serrated section could be used for sawing wood (I tried––it’ll do in a pinch but it’s not advisable), but it’s aimed more at cutting rope. The Endura 4 sliced through my test rope so damn fast I got carried away and ended up with a pile of four-inch sections of rope before I came to my senses and stopped hacking away, chuckling like a little kid.

As far as endurance goes, I’m sure you could break the blade off the handle if you wanted, but that would take an amount of force you should never subject a folding knife to. My week-long test of dirt, sawdust, rain, and test-drops on pavement didn’t leave the Spyderco any worse for the wear. Credit that to simple design and quality construction. The back lock mechanism is stone-cold simple and hard to damage.

The Endura 4 was very sharp. Rather than try to come up with a 1-10 scale, I prefer to rate a knife’s sharpness with my initial reaction to feeling the blade’s edge for the first time. The Endura 4 earned a solid holy shit sharp, maybe a holy shit and a half. That long taper that was so different from everything else I’ve seen lately adds to that, making this an awesome piece of gear for fine, precise cuts. Serrations offer valuable versatility.

This knife’s weight also delivered on Spyderco’s promise. Even with a closed length of five inches, the Endura 4 disappeared every time I clipped it into my pocket. One night, I took the dog for a three-mile walk after dinner and never once felt the knife through my hip pocket. It might not fit my hand like a glove, but there was definitely some ergonomic R&D that went into this shape.

I always appreciate company execs who are willing to take a few hits to deliver a committed product. Every knock on the Endura 4 just makes it better at one thing: being a well-built EDC knife that doesn’t weigh very much.

Let me get this out of the way: My gripes with this knife are personal and subjective. I’m still not in love with the shape. As good as the knife is, there are situations when I would feel self-conscious busting this thing out. There’s a bit of a trying-too-hard vibe I get from the design.

I never had a problem using the handle, but it didn’t feel natural in my hand. Grip isn’t an issue; it’s a result of the thickness––or lack thereof. This knife needs to be held with your fingertips, rather than your whole hand. Forceful cutting takes a backseat to finessed slices on the Endura 4’s priority list.

That’s all par for the course for a knife that’s so laser-focused on lightness. It makes sense and I’m glad they built the Endura 4 this way. It also makes it slimmer and more comfortable to carry.

While a few of the Task & Purpose word-slingers were chatting about our respective test knives, someone remarked that they didn’t know what they were missing before using their first Spyderco. I feel the same way––there’s something special about these weird-looking knives.

Like I said, it’s not something I’d carry downtown or around an office. The visuals are just too Grim Reaper. There are other times, though, when function outweighs form. The Spyderco Endura 4 is definitely more tailored to that kind of work. In the field or on deployment, I’d reach for this in a heartbeat––maybe faster.

Humor me while I explain the Spyderco Endura 4 with a comparison from the automotive world. In the 1990s and early 2000s, Mitsubishi rocked the rally-racing world (and earned a reputation on the streets) with the Lancer Evolution. With every iteration, the Evo got faster, sharper, and more focused. As much as I love the little rally car that could, none of its generations are what I’d call beautiful.

The same goes for the Endura 4. Spyderco has refined and improved the knife with four incarnations spanning more than 30 years. It’s well-built, functional, and makes it clear that the designers cared more about performance than appearance or gimmicks. It has my respect.

FAQs about the Spyderco Endura 4

Q. How much does the Spyderco Endura 4 cost?

A. Spyderco lists an MSRP for $145 for the Endura 4, but we’re all about finding deals for you. Snag one for a discount right here.

A. Spyderco continuously improves products over time, so each generation comes with a few refinements over its predecessor. One of the most noticeable changes to the Endura 4 is the use of Torx screws rather than pins, and the ability to switch the pocket clip not only from side to side but end to end. Some Endura 3 blades used ATS55 steel, some used VG10 steel. All Endura 4 blades use VG10 steel. Higher vanadium content in the current blade adds corrosion resistance and helps a sharp edge last longer. Make your way over to Thought Co. for more steel comparisons.

Q. Are Spyderco knives worth the money?

A. Compared to a lot of the competition, Spyderco knives can look relatively pricey. Some of that is a result of keeping the manufacturing process in Japan, and so is the resulting level of build quality. Spyderco also uses more desirable steel in many cases. I can certainly vouch for the Endura 4. Our own Joe Plenzler asks a lot of his EDC knives, and he’s not shy about praising his Spyderco.

Q. Why is there a hole in my knife?

A. That thumb hole isn’t for show –– it’s been a patented feature of Spyderco knives since 1981. It was developed as a more user-friendly alternative to nail nicks and thumb studs. I suppose how well it works is a matter of personal taste, but I like it. The hole makes opening quick and easy, with tons of grip in wet conditions.