Review: the Streamlight Microstream is your new replacement for your tired cellphone light

A powerful EDC light that fits in the palm of your hand. 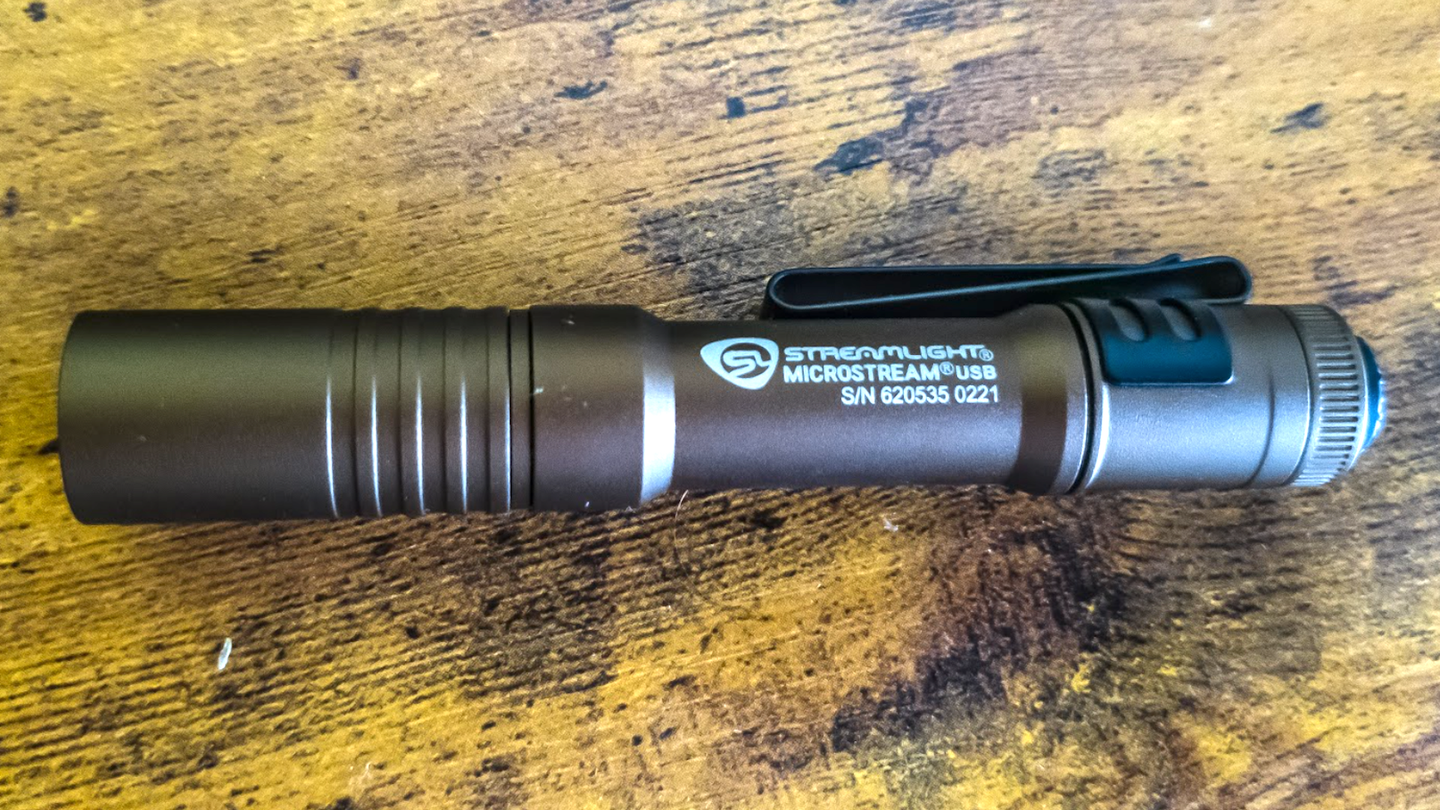 If Surefire was the Coke, Streamlight has always been the “Is Pepsi okay?” of the tactical flashlight market. Always resting at a slightly lower price bracket, Streamlight has remained poised to provide flashlights that work to a more budget-conscious end of the market. From rail-mounted weapon lights like the HLX to the handheld lights that include the subject of today’s review, Streamlight targets the people who want on-paper performance for less of an up-front investment.

The Streamlight Microstream’s stats on paper are fairly impressive, being under four inches in length, and boasting 250 lumens and 1,150 candela, all powered by a rechargeable lithium battery. In addition to this, it’s lightweight at just over a single ounce, features a double-sided clip, two operation modes, and has an attractively tactical bronze finish on its aluminum body. But is it actually just as good for less? Let’s answer that question.

Editor’s note: the Streamlight Microstream also made Task & Purpose’s roundup of the best EDC flashlights of the year.

As a quick disclosure: this flashlight was provided to me for this review free of charge by Task & Purpose, and I’m not sponsored by Streamlight or any of the companies that I review.

The Streamlight Microstream comes in a simple paper-wrapped clamshell package, which as we know, is my favorite type of packaging. Pretty much all the pertinent information regarding the capabilities of the flashlight is on the package, barring a small paper manual inside, so the cost-cutting measures are in full effect. The package includes an inexpensive lanyard that attaches via a decidedly janky ring that hooks under the pocket clip. Probably not how most people will carry it, but it’s an option if you feel like adding to your IT guy lanyard. The pocket clip features both forward- and rear-facing clip options, for the express purpose of clipping the light onto the brim of a ball cap or cover for hands-free use. This feature requires you to take the time to fiddle with getting the light clip onto the brim, as the rearward clip is very tight and will likely require some break-in to fit without needing to remove your hat first.

The light itself is a very compact 3.8 inches, fitting neatly inside my closed fist, and with the rubberized thumb switch within easy reach. The switch itself can be momentarily held on, or fully depressed to click on. If you double-tap, it goes into a lower power mode if you don’t want to ruin your natural night vision as much, such as in a situation where you just need to read something in the dark versus searching for a light switch in a large darkened room. Switching between these modes can be confusing, especially if you have fat fingers like me, requiring you to wait a second after shutting off the flashlight when in low-power mode for the light to reset. I’ve seen other lights that have a switch where you can twist the rear cap to select the different modes, but those lights were nearly triple the price of the Microstream.

The beam itself is bright, cast by an LED bulb, and creates a roughly four-foot-wide spread at 10 feet, and a 10-foot spread at 30 feet. The “throw distance” of the beam is effectively 30 feet maximum, in spite of the stated 68 meter maximum reach, and I’d place the optimal distance at no more than 20 feet for actual feature identification. This is definitely a light that is more suited to indoor or close-quarters usage, which matches its compact size and low price tag. Powering the light is a rechargeable lithium-ion battery with 370 milliamp hours, and 3.7 volts, which gives the light 90 minutes of constant power on high, and 210 hours of power on low. Charging the battery from empty to full takes roughly four hours, and the charging port accepts normal micro-USB cables. To access the charging port, simply slide the shroud around the light head forward, which exposes the micro USB port on one side, and a small LED light on the other side, which grows red while charging, and green when fully charged.

The manufacturer advertises the Microstream as being reasonably sturdy, not making any sweeping claims, but pointing out the construction and water resistance. The body of the light is made of painted aluminum, and the coat of paint is applied evenly and thickly enough to withstand minor scuffs. The lens itself is made of polycarbonate, which offers a reasonable level of impact resistance, but makes it susceptible to scuffs and scratches. This could theoretically lead to increased beam diffusion in sandy environments over time, but at that point the light is cheap enough to where you could just purchase another one. The manufacturer states that the light is water-resistant to one meter, which basically means that you can use it in the rain or it can get mildly splashed. I wouldn’t submerge the light at all, and definitely would take the time to dry it out before use in case you do drop it in shallow water. The pocket clip is made of durable steel that seems to hold its shape very well, and it’s coated to resist rust under normal conditions. Finally, the thumb switch has a rubber cover, which seems reasonably thick and sturdy, providing durability while also ensuring that the switch is still easy to actuate.

How we tested the Streamlight Microstream

The most obvious test was to go into a dark room and see how well it lights things up, and how much detail I could see in the dark.The beam illuminated my entire hallway on high mode, and cast a much less harsh beam on low, while still allowing me to see crucial details like entrances, and where the hallway ended. Shining the light off my balcony and onto the street outside, it allowed me to see colors and major details from the second story, which is in line with the advertised capabilities. All in all, this is pretty good performance for a $30 light that’s the size of a tube of chapstick.

Finally, to test the durability, I walked over it, hammered it with a heavy rubber mallet, and bounced it against the wall a few times. Still working. While I wouldn’t call this a supremely durable, all-weather light, it’s durable enough to withstand regular everyday use. However, should you anticipate counting on a light in adverse conditions, I’d highly recommend spending more than $30 on a flashlight and investing in something explicitly suited to wet, hot, or high-impact environments.

The Streamlight Microstream is cost-effective, providing 250 lumens at a very affordable price, which allows nearly anyone to have a compact light in their pocket that’s vastly superior to their phone without having to shell out a considerable amount of money. The light is very handy, and the switch is easy to use even with gloves. The paint job is applied very evenly, and the bronze color scheme gives this light a very attractive and high-quality feel. Finally, the fact that it’s USB-rechargeable means that you don’t have to worry about swapping batteries as much as you would with an alkaline-powered light that uses AAAs, for instance.

The high and low modes are a little finicky to toggle between, and you can accidentally engage the low function if you accidentally double-push the button, which then requires you to pause, wait a second, and then try again. It’s understandable to just have a dual-function switch at this price point, but some sort of separate hardware switch to easily toggle between modes would be preferable. Additionally, there’s no red-lens mode, even a lens cover, which would definitely expand the utility of this light for military purposes, even though that’s outside of what this light is advertised for. Finally, I wish the charging port cover was screw-down, to improve the water resistance somewhat.

This is the optimal throwaway backup light for anyone, be they mechanics looking for something to keep in their breast pocket to have in case they have to look into an engine bay in a hurry, someone who wants to have a compact flashlight in their vehicle for emergencies, or even someone who wants to have an emergency flashlight on their person at all times that does more than their phone. At the prices they’re asking, it’s hard to say no to the Microstream, and it’s priced at a point where you could purchase multiples.

FAQs about the Streamlight Microstream

Q: How much does the Streamlight Microstream cost?

Q: Does Streamlight have a lifetime warranty?

A: Streamlight warranties their products to be free from defects for the lifetime of the product, excluding things like light bulbs and normal wear and tear.

Q: Does the military use Streamlight?

A: Yes. Hilariously enough, the issued U.S. Marine Corps boot camp flashlight is now a modified Streamlight Sidewinder, called the “Sidewinder Boot,” replacing the old J-shaped lights of yesteryear. In addition to this, you can see Streamlight products in use mounted to the helmets and vests of many U.S. service members.

Q: Can I use the Streamlight Microstream to blind my opponent so that I can whip out some ninja stars or something in a self-defense situation?

A: I bet you carry a butterfly knife and nunchucks, don’t you?