The U.S. Bank and Freedom Alliance partnership has donated 24 vehicles to veterans and their families since 2018, and last week’s event was the first specifically for Gold Star Families. 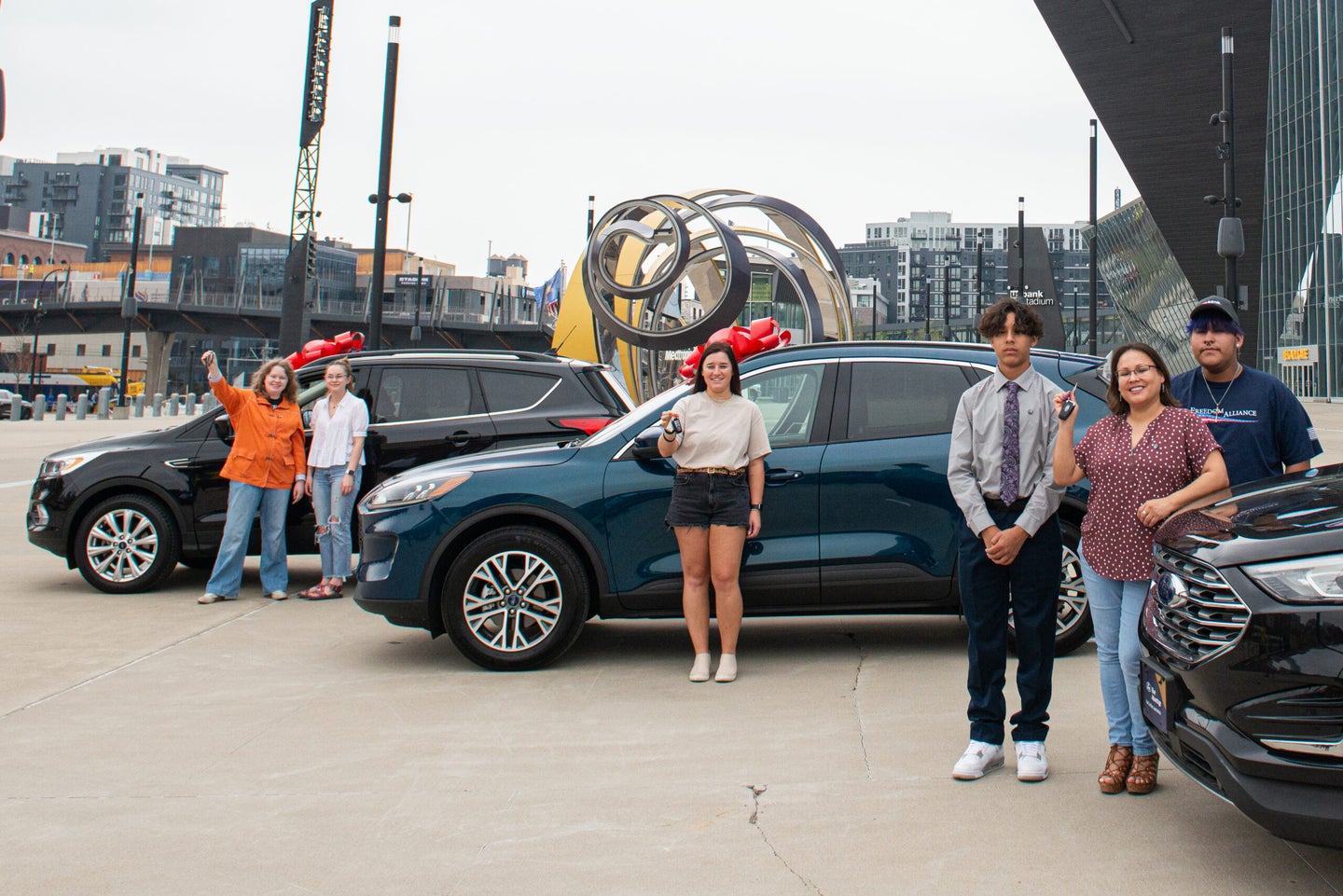 On May 11, four women from disparate backgrounds met at the U.S. Bank Stadium in Minneapolis. Their bond came from a shared burden that most never experience: They are Gold Star Families, or surviving family members of servicemen and women who made the ultimate sacrifice.

Keely Schild was seven when her father, U.S. Army Sgt. 1st Class Richard L. Schild, was killed in action in Iraq after his vehicle was struck by an explosively formed projectile.

Lilly Hammitt and Gwyneth McSween lost their father, U.S. Navy Explosive Ordinance Disposal Petty Officer 1st Class Joseph “Adam” McSween, during the Iraq War when his vehicle was struck by a rocket. Lilly was five at the time and Gwyneth wasn’t yet three.

All three of these little girls, now strong and vibrant women, were forced to grow up without the fathers they said goodbye to when they boarded the aircraft to fight overseas.

Veronica Morin was not a child when her loved one passed away. Her husband, U.S. Army Sgt.  Darby Morin, died from injuries sustained in a vehicle rollover in Afghanistan near the Pakistan border in 2009.

While nothing can bring back their loved ones, the ‘Driven to Serve’ initiative between U.S. Bank and nonprofit partners, such as Freedom Alliance, which pairs available vehicles with military families, hopes in some small part to ease the burden faced by these survivors.

The U.S. Bank and Freedom Alliance partnership has donated 24 vehicles to veterans and their families since 2018, and last week’s event was the first specifically for Gold Star Families.

For Keely, now an interior design graduate from South Dakota State University who is taking classes in small business management, this new vehicle will make planning for her future a little easier. She wants to move to a larger city and the vehicle will be a reliable way to drive home to see family in Yankton, South Dakota.  Her family remains close with her dad’s friends, and they often gather to share stories on Memorial Day and December 4, the day of his death. The small town where Keely was born, Tabor (population 425), still holds a fireworks display each June to honor her father.

Although she was young at the time of his death, Keely has a strong sense of who her father was thanks to the wealth of stories shared by her family and her father’s friends.

Lilly and Gwyneth similarly plan to use their new vehicle to help their education and career ambitions. Lilly has just finished her degree as a biology major and is wrapping up her prerequisites to attend chiropractic school. Gwyneth, who graduated from high school this month, will be attending the University of Iowa this fall.

The family’s 2007 Honda Odyssey is on its last legs, so “it will be a blessing to have a reliable car,” she said.

Lilly added, “We’ve met a lot of military kids, but being a Gold Star Family is different in that other military kids have their parents in their lives. We have similar experiences, but we have the differentiation that our dad didn’t make it home.”

This vehicle donation event “is a really awesome way to honor Memorial Day and really honor those who have made the ultimate sacrifice,” she explained.

Beyond the gift of the vehicles, the opportunity to honor the service and sacrifice of Gold Star Families deeply resonated with the recipients.

“A lot of people associate Memorial Day with barbecues and a day off, but for Gold Star Families it’s a super important day,” Keely said. “We try to honor my dad every day, but Memorial Day is a particularly special day for us.”

To learn more about the U.S. Bank and Freedom Alliance partnership, and how you can help them in their mission to support families of those who gave their all, visit the Freedom Alliance website.

This article was sponsored by U.S. Bank.