I was recently given a few samples of the Rush 2.0 pack line by 5.11 Tactical. Here's what I found. 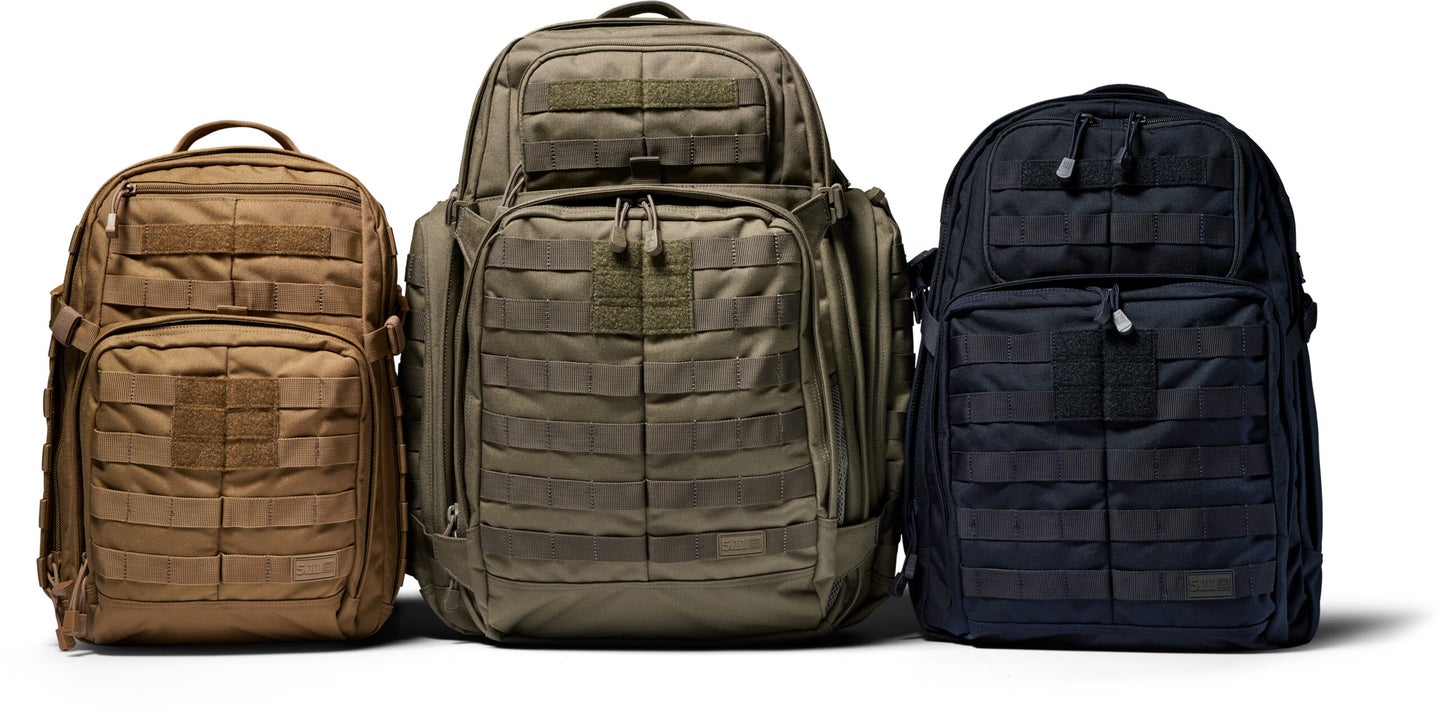 Most military members have a surprisingly emotional relationship with their issued packs. Notice I didn’t say “good.”

Depending on your job specialty, you may never break out an assault pack for anything more strenuous than carrying your laptop and a change of clothes. For other jobs, your pack may carry absolutely everything you need to survive. In Iraq, there were days when I’d wake up, bone-weary from a 19-hour mission the day prior, and stare at my overloaded ruck with a loathing that’s hard to describe. Carrying several radios, spare batteries, extra clothing, ammo, some 60mm mortar rounds, smoke and frag grenades, a few MREs, a full CamelBak and a two-quart canteen, the ruck quickly became a 100 lb. monster that did nothing but make your back ache, your shoulders bleed, and your knees buckle.

Unfortunately, for the knuckle-draggers of the world, a soldier’s kit weight hasn’t changed much in the last few centuries. If anything, it’s increased. As technology improves, gear designers are able to put more and more ‘stuff’ onto the back of a soldier in the name of necessity.

So, what’s the solution?

Recently I was given a few samples of the Rush 2.0 pack line, created by 5.11. If you’ve ever worn the uniform, you probably recognize them as the top unofficial supplier of CIA, ODA, and OGO (other government organization) outfits anywhere in the world.  You know the type — awesome tan, jacked muscles, green or tan slide pants, hiking boots, and some sort of moisture-wicking polo.

Seriously, what is the point of being a secret government operative if you all have to dress the same?

But that’s a discussion for another time. After a few days of playing with the Rush 2.0 packs, I got angry that it had taken me this long to find a comfortable tactical pack, and even angrier that I’d only discovered them after getting out of the military.

I spent 10 years in the infantry, first using the infamous metal-framed ALICE pack (introduced in 1973), then ‘upgrading’ to the plastic ODU & MultiCam MOLLE set-up currently in use today. Both definitely had their issues, but again, that’s a discussion for another time. Besides, anyone who’s ever trekked more than a dozen miles at a stretch knows exactly what I’m talking about.

Since then, I’ve become a dirty civilian, but in my experience, if your unit has a sergeant major or other senior NCO in charge who recognizes something good when he or she sees it, they’ll allow you to use non-issue (i.e. superior quality) gear in lieu of the dumpster fire you get from CIF (Central Issue Facility). However, just like combat deployments, your experiences may differ.

While 5.11 (and all other major pack manufacturers out there) insist on using liters to size their bags, I don’t speak European, so I’ve decided to translate the capacities of the RUSH line into measurements most of us can understand. Hope it helps.

The smallest of the RUSH line looks and carries just like any other backpack. You can get them in Dark Navy, MultiCam, Kangaroo (Tan), or Black, so you can blend in with whatever tactical uniform you’re required to wear. They also offer Ranger  green and Double Tap (black/grey) if you don’t want your outfit to scream “thank me for my service” when walking through airports.

The construction is heavy-duty, with purpose-built features like a hydration port that bends your straw where it needs to go, and an admin panel that’s actually usable. (I’m looking at you, MOLLE set-up.) In addition to a padded laptop sleeve (raised from the bottom of the pack so it doesn’t hit the ground), what really makes these bags sexy is a built-in concealed carry compartment, with a hook and loop closure for easy access!

After receiving the bag, I immediately packed the RUSH12 with everything I carry around for my day job — laptop, charger, two notebooks, calculator, cell phone charger, Springfield 1911 .45, two spare magazines, reflective vest, and I attached my hard hat using a D-ring. Not only did everything fit perfectly, but the black RUSH12 was rugged enough to carry on construction sites while still perfectly appropriate in a semi-formal office environment.

The middle of the RUSH line is 5.11’s answer to the standard military assault pack, with a little more capacity thrown in for good measure (37 liters vs. 32 liters).

It has the same features as the RUSH12, with plenty of MOLLE and hook/loop attachment points on the back. The shoulder straps are thicker and much more comfortable than an issued assault pack, and there’s even more room for MREs, batteries, radio and whip, with plenty left over for personal items. Luckily, I don’t have to carry most of that stuff anymore, so I decided to see if I could comfortably transfer my bulky go-bag into the Rush24. Spoiler alert: It was easy.

I was able to fit a change of clothes (warm and cold weather), a water filter, two stripped MREs, four loaded AR magazines, a fire starter, an aid kit, batteries, a poncho, a Jetboil with two spare gas tanks, and my travel pillow into the pack with room to spare. The RUSH24 now occupies a place of honor in my basement, sitting next to the rest of my bug-out gear, where it will (hopefully) never be used again.

The top of the RUSH line’s size falls between a medium (50 liter) and large (65 liter) MOLLE rucksack, with 55 liters of usable space. If you were to remove the sleep system typically included on long movements (fart sack, inner/outer bag, weatherproof cover), you’d have about the same capacity as a large, well-packed ruck.

I no longer conduct long-range ground movements wearing body armor and combat gear. However, I do backpack regularly, carrying everything I’ll need for a few days in and out of the area I’m visiting, so I was very excited to give this bag a try.

The RUSH72 looks closer to a military ruck than a civilian hiker’s pack, but I’m very pleased to report not only was I able to get the entire contents of my 51L Osprey three-day pack into the RUSH, but the wider body allowed me to redistribute my three-person tent components evenly across the bag. This left me enough room to add a second Jetboil and fuel, along with a handgun and ammunition, without compromising my travel load. Those of you who’ve had the pleasure of walking long distances with a heavy bag know exactly how important weight distribution is.

Whether you’re an active-duty service member just trying to avoid crippling spinal damage, or an outdoor enthusiast who needs a little bit more out of their gear, do yourself a favor and check out the new RUSH 2.0 line from 5.11. Trust me, you’ll be glad you did.

This article is sponsored by 5.11.