116 Years Of Service For Vets Must Be Driven By A Cause. What’s Yours? 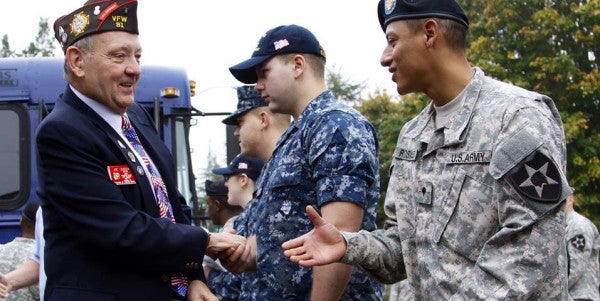 On Sept. 29, 1899, a group of 13 veterans gathered together and decided there was a cause to which they personally related and collectively wanted to advocate for. Instead of just screaming on the street corner, they banded together and formed an organization now known as the Veterans of Foreign Wars of the United States, or the VFW.

That first group of VFW members was no different than any group of VFW members today. All had families; one had earned the Medal of Honor. All wore the uniform before and all were looking at the road ahead of them with a full measure of curiosity as to where life would lead them. However, there was no Department of Veterans Affairs, no G.I. Bill, nor anything else today’s veterans are used to because the emotional obligation of our country to care for those who served had not been fully recognized or codified.

Every generation of VFW members has left its mark through a specific cause. Those from the Spanish–American War and Philippine Insurrection pushed to establish the framework for many of the benefits and programs we now see through the Department of Veterans Affairs. The World War I veterans would become known as the “Bonus Army” and in 1932 withstood military force while protesting on the National Mall and steps of the U.S. Capitol for benefits much needed at the time. They then led the charge for the G.I. Bill of Rights even before the shooting stopped in World War II. Following them, then World War II veterans — sometimes called the “Greatest Generation” — built what we now recognize as the American middle class.

Members of the Bonus Army camped out on the lawn of the U.S. Capitol building, 1932.Photo via Wikimedia Commons

Vietnam veterans vowed “never again” would vets be disrespected for their service because of a war where the American public couldn’t disassociate the politics of war from the warrior fighting it. This generation continues to face issues with Agent Orange exposure with determination, and they have won some significant battles. However, Vietnam vets fight for benefit equity not only for their contemporaries, but also for the post-9/11 generation of veterans. This is where the VFW continues to exercise such a significant role.

When the first wave of Iraq veterans came home from war, Vietnam-era and Gulf War veterans had already fought to secure five years of free VA health care for our generation, along with a traumatic injury insurance and family caregiver support. Moreover, when the need for a new, 21st century G.I. Bill, was recognized to help those coming home from operations in Afghanistan and Iraq it was veterans from generations past, and groups with decades of lobbying experience, who showed this new generation of veterans how to get things done.

Unfortunately, some of my contemporaries take this for granted. I’ve heard from some people who I served with that groups like the VFW are obsolete because Congress likes veterans, and that they will always do the right thing by our nation’s military. In my experience, this couldn’t be further from the truth. Every day we fight to preserve and enhance our earned benefits programs. I know first-hand the impact of the benefits past generations fought for, and I see their impact when I look at the two college diplomas that my GI Bill made possible. Seeing the veterans I have had the privilege to meet deal with issues on campus, in the VA, and with their own oftentimes struggle to return to normalcy, motivated me to lead from the front of this organization as both a member of their national legislative staff and an elected state officer for the VFW Department of Virginia. I found my cause, and the VFW welcomed me with open arms as part of its larger effort.

No cause ever truly ends as you must first win the legislative victory and then win more to protect and expand what you have earned. The only things we are entitled to are listed in the Constitution, while the rest is a product of legislative activism. We will also see this in our own generation as we move forward.

However, first we need our cause and there is no shortage. We all know the statistics related to suicide among veterans. We need to continue to improve the transition process for those who leave the military and protect the future of VA-provided health care. A recent VFW study found that more than 87% of veterans would recommend VA care to their fellow veterans, despite continued problems with the VA health care delivery system. All of these are causes that would be promising for us to advocate for, but our generation needs to decide which to start with, and make it our opening salvo of a future of continued service like those generations before us.

Not all of the needed advocacy work is done in Washington, D.C., has media coverage or is something that consumes a career. Many of us have family obligations or deep community roots that we cannot afford to lose. However, you don’t need to be in Washington to affect change. You can push your cause at home. A few hours on a Saturday morning or a weeknight can mean local youth and education programs continue to exist. Time spent visiting those we served with is never considered wasted time and is more rewarding than any paycheck.

Soldiers, civilians and family members from U.S. Army Africa and the Vicenza Military Community came together to pay tribute to U.S. veterans, past and present, during a Veterans Day Commemoration Ceremony .U.S. Army photos by Edward N. Johnson

We need advocates at every level of the organization including in small towns across America. More than 6,800 VFW posts have an elected commander; we accredit more than 1,600 service officers to help veterans file VA claims. We need the 1.7 million members of the VFW and its Auxiliary to vote and get involved. But, more important is we need the 2.6 million veterans of our generation to get involved — and the VFW is a vehicle that can support your cause for advocacy. Find your time and your place to help our generation in its fight for veterans as part of the cause, whatever that cause may be.

As for the cause itself, we can have an impact as a generation and as individuals. We can fight suicide by simply offering peer support in our communities. A VFW post can lead that. You can be part of the effort to memorialize those we served with and those who still are not home by building what may be the only veteran’s memorial in your hometown. But we need to recognize that cause as part of our lives along with being a good parent, spouse and citizen.

As the VFW celebrates its future, there is no doubt that our nation will need our generation to carry the torch. Veterans become coaches and teachers as well as a host of other influencers who have a huge impact on the trajectory of our country. It is a fundamental value that as we hang up our uniform, we must continue to serve. Figuring out our cause is the first step to do so. The vehicle for making that impact is 116 years young, and the VFW will continue to be where those who served overseas belong.